Accessibility links
'Our Hell': Making Misery Beautiful On her first solo album, Knives Don't Have Your Back, Emily Haines writes stripped-down folk songs that sound as catchy as they are doomstruck. The Metric singer purges personal and political demons through dark, minor-key melodies and glorious arrangements. 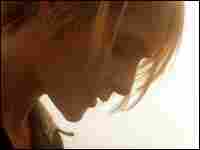 As leader of the Canadian dance-pop band Metric, Emily Haines approaches the personal and political with equally uncompromising rawness. On her first solo album, Knives Don't Have Your Back, Haines finds a way to ratchet up Metric's lyrical intimacy, while injecting eerily infectious melodies that render its songs as catchy as they are harrowingly doomstruck. Haines' likeminded peers in Rilo Kiley and Stars — Jenny Lewis and Amy Millan, respectively — both released stripped-down solo records this year, but neither even approaches the wrenching emotional depths here.

The album-opening "Our Hell" sets the tone quickly: Nothing says "grim resignation" quite like the words, "Our hell is a good life," as Haines issues a soft and subtle, vaguely obtuse argument for complacency in misery. But as bleak as "Our Hell" is, it's virtually impossible to deny the song's glorious arrangement, in which Haines and her supporting cast lay out a rich assortment of warm, minor-key melodies.

"What I thought it was, it isn't now," Haines sings, half-heartedly explaining her disillusionment before upping the ante: "There's a pattern in the system / There's a bullet in the gun / That's why I tried to save you / but it can't be done." It's a testament to Haines' considerable gifts that all this pathos goes down so smoothly and sweetly: If her sadness feels this warm, it's hard to imagine what would happen if she cheered up.