Accessibility links
A Song-and-Dance Man, Reconsidered A performer of boundless energy, Sammy Davis Jr. was known for plowing over audiences with flim-flam and razzle-dazzle. But in the studio, the diminutive don of the Rat Pack was, at times anyway, a serious singer. Here, he performs in a desolate cocktail bar, with only a guitarist for support. 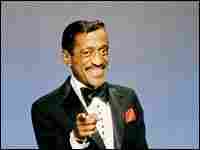 A performer of boundless energy, Sammy Davis Jr. deserves more respect than he gets. hide caption

Why do all-around entertainers like Sammy Davis Jr. have a hard time getting respect as singers? 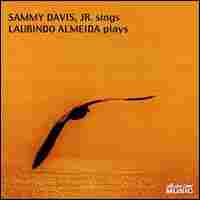 Shadow of Your Smile

We'll Be Together Again

Of all the song-and-dance entertainers of the 1950s and '60s, Sammy Davis Jr. is the one whose recording career most deserves to be reconsidered. A performer of boundless energy, Davis was known for plowing over audiences with flim-flam and razzle-dazzle. But in the studio, the diminutive don of the Rat Pack was, at times anyway, a serious singer. His discography doesn't reflect this from top to bottom: There's a fair amount of goopy schmaltz and novelty stuff under his name, alongside such sparkling outings as 1960's I've Got a Right To Swing, which features Count Basie's uncredited big band.

Nothing he ever did, though, is quite as startling as the duet record Sammy Davis Jr. Sings, Laurindo Almeida Plays. The disc places Mr. Entertainment in a desolate cocktail bar, with nobody to impress and only a guitarist, the underrated Brazilian Laurindo Almeida, for support.

Davis knows he can't bellow, so he instead sings in a way that emphasizes slight variations of shading and inflection — areas over which he displays consummate control. On the tempo-less early verses of "Here's That Rainy Day" (audio), Davis sings lazily, in a nothing-special way, yet still changes the atmospheric pressure in the room. Unlike many singers, he's in no hurry to fill every inch of the frame; to prove it, he lets his words fall in all kinds of unlikely places between the beats. Having no orchestra to hide behind would seem to be a problem for a belter like Davis, but he takes full advantage of the intimate setting: At times during "We'll Be Together Again" (audio), which was recorded a decade later by the similarly sensitive duo of Tony Bennett and Bill Evans, Davis sounds happy just to hang out and listen to Almeida's spry, carefully considered chords.

That sensitivity to the accompaniment helps make the Davis version of "The Shadow of Your Smile" (audio) one for the ages: It begins in a sullen, tempo-less reverie, then snaps into a disciplined bossa-nova beat for the second verse. Then, as the singer and the guitarist amble along, they shift back and forth between the tempo and the fantasy, echoing and expanding upon the nostalgic yearning of the lyric in a zillion little ways. Anyone who's never thought much about Sammy Davis Jr. as a singer should start here.