A Canticle for Yucca Mountain

A Canticle for Yucca Mountain 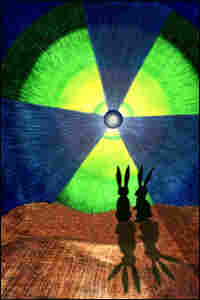 In Walter M. Miller's post-nuke sci-fi classic A Canticle for Leibowitz, there are no books. Literate people are killed. And underground monks work to preserve what little pre-war knowledge they can salvage, without knowing what the knowledge actually means.

The monks' illuminated manuscripts, we learn, are actually blueprints for materials used to make nuclear bombs. There's no way for the monks to know that their saved traces of civilization will, most likely, destroy civilization again.

The idea that the dangers of nuclear material might be lost on future descendants is not just limited to apocalyptic science fiction stories. It also worries those who live in Nevada near Yucca Mountain, the site where Congress and President Bush tentatively approved plans to store power-plant nuclear waste for the next 1 million years.

Josh Abbey, the director of the Desert Space Foundation in Nevada, says most people are not aware of the consequences of nuclear waste.

"The decision to place the waste [in Yucca Mountain] will impact humans 1 million years in the future," he says. "To place that kind of responsibility forward, I can't think of anything more audacious."

In 2002, Abbey created a design competition to find a permanent warning sign for the proposed nuclear waste site. The purpose of the competition, he says, is to find a universal warning sign which conveys that the deposit is highly dangerous. One caveat: the symbols have to work even if language or communication breaks down in the future. And the design has to last at least 10,000 years.

"Imagine," Abbey says, "that in the future, whoever's here doesn't communicate the way we do."

Language and symbols do change over time. A report by the United Nations Educational, Scientific and Cultural Organization (UNESCO) says that half of the world’s 6,800 languages are in danger of disappearing over the next century. Add the fact that humans are naturally curious creatures who like to explore unknown artifacts (Egyptian pyramids ring a bell?) and you have a potentially deadly situation unfolding eons away. Abbey worries that a universal warning sign could actually encourage exploration.

Still, he says, the government needs to design an effective warning symbol that will last far beyond current generations. In the 2002 Universal Warning Sign competition, the submissions were broken down into two categories: practical, technical solutions and sociological or philosophical statements about the futility of the exercise. Below, just some of the designs submitted in the competition: 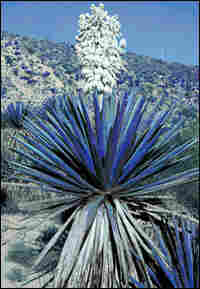 Ashok Sukumaran's winning design in the competition features "genetically engineered Yucca catcus which turns various shades of blue depending on the levels of radiation in the area."

"The irony of the concept," says Josh Abbey, "is twofold. First, there are no Yucca cactuses at Yucca Mountain. Secondly, it's like one genetic mutation trying to control another mutation." 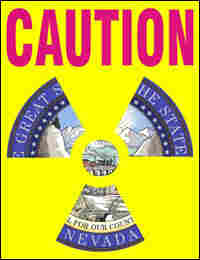 Joshua Abbey's design features the seal of the state of Nevada superimposed on a radiation symbol.

Abbey's design contains symbolic references to Yucca Mountain. "The center of the design is a train, which is how the waste will be transported," he says. "The bridge looks like a tombstone, and the rays of sunshine are transformed into radiation waves." 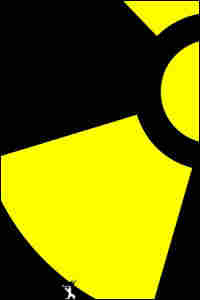 Students from Southwest Missouri State University entered eight designs into the competition. This one, from student Brian Norris, shows a man bowing to a trefoil radioactive symbol.

The trefoil radioactive symbol was doodled on a notepad at the University of California Radiation Laboratory in Berkeley in 1946. The design symbolizes rays radiating away from an atom and first featured magenta symbols on a blue background. The blue background was eventually replaced by yellow, which does not fade in sunlight. The use of yellow was standardized in 1948. 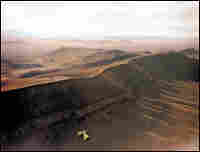 Yulia Hanansen created a model of a giant 3-D rock placed at the entrance at each of the six Yucca Mountain openings. The sphere at the center of the rock represents the element uranium.

In her artist's statement, Hanansen says "The monument itself becomes a symbolic mountain where one will be able to enter it and learn about what lies within."

Scott A. Ogburn and Linda Buzby designed a series of mausoleums over the Yucca Mountain site. The design features the universal signs for "No," "Nuclear Waste" and "Radioactive Material."

From above, the signs form a giant "Radioactive Material" warning sign.