Accessibility links
Native American Farmers Allege Loan Bias A federal lawsuit filed by Native American farmers and ranchers accuses the U.S. Department of Agriculture of systemic discrimination in farm-loan programs. The suit, which has languished since 1999, may soon move forward. 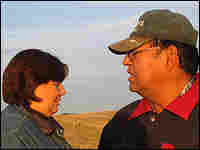 Keith and Claryca Mandan are two of the named plaintiffs in the lawsuit alleging discrimination by the USDA. David Schaper hide caption 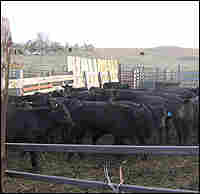 The Mandans claim that discriminatory lending practices by the USDA have prevented them from getting the loans they’d need to build a barn. David Schaper hide caption

A federal lawsuit filed by Native American farmers and ranchers accuses the U.S. Department of Agriculture of systemic discrimination in farm-loan programs. After languishing in the courts since 1999, the suit may finally move forward.

Keith Mandan is a cattle rancher. It's what his father and grandfather did, and what he always wanted to do.

"When you talk about the way of life, it's kind of our only way of life," says Keith Mandan. He's a member of the Three Affiliated Tribes -- the Mandan, the Hidatsa and Arikara tribes -- who live on the Fort Berthold Indian Reservation in western North Dakota.

Mandan's family runs a cow-calf operation. They raise calves from a base mother herd. "We breed the cows here, winter them, calve them out in the spring," he says. "And when the calf reaches approximately three to five months of age, we sell them on the feeder market."

Mandan estimates he has about 200 to 250 cows, on about 500 acres of prairie grasses overlooking the Little Missouri River Valley and Lake Sakakawea.

It's a tough way to make a living, as ranchers have slim profit margins that are vulnerable to market-price fluctuations. And their product, the livestock, can be damaged or killed by the wild forces of nature, from droughts to blizzards to predators, such as wolves and coyotes. Mandan says that because he's been denied access to USDA loans and subsidies over the years, he cannot afford a barn to protect his herd from the harsh elements.

"It's pretty much ranching on the open prairie" all year, Mandan says. He tries to compensate for the effects of nature by feeding his calves a higher-quality feed fortified with supplements and antibiotics.

Having no barn means that calving -- when mother cows give birth to calves -- happens out on the open prairie, a risky proposition. Keith's wife, Claryca Mandan, says nature can take a toll, particularly if a blizzard strikes during calving season.

"It's not uncommon, if we have an early spring storm during calving season, to lose a significant portion of the calf crop. It's very risky,” she says.

In addition to not having barns for the animals or for their hay and feed, the Mandans lack a machine shed and a garage for their tractor, pick-up and other farm implements. That means their tools rust, age and break down more quickly. Until recently, they didn't have any water running to their calf corral. They hauled water from 15 miles away so their livestock could drink.

The reason, the Mandans claim, is because they were repeatedly denied USDA loans and subsidies -- money they say white farmers and ranchers in the area were able to access.

"You have to understand that FSA [Farm Service Agency] only provided us with operating loans for two years before they started the discriminating acts," Claryca Mandan says.

In bad years for farmers and ranchers, the USDA often offers to restructure loans to give them more time to pay it off. The government will also write down, or forgive, some of the debt because of such losses.

"Our non-Indian neighbors got numerous write downs, some more than once, some almost every year," Claryca Mandan says. "These tools were never used on the Native American loans.

"Had we been given credit, and the opportunities and the programs that all of our non-Indian neighbors had gotten, we would be on par with them today," she adds. "We would have done developments such as a hay shed, a cattle corral, water facilities. We wouldn't be calving out on the barren prairie.

"All we were asking for was equal treatment, and we never got it."

The Mandans realized they weren't alone. As the government tried to foreclose on them, they noticed that the delinquency rate was skyrocketing among the other farmers and ranchers on their reservation, and on others across the country. So in 1999, the Mandans and other Native Americans joined with a Sioux rancher named George Keepseagle and filed a civil-rights lawsuit against the USDA. Keepseagle v. Johanns alleges government discrimination against Native American farmers and ranchers.

The suit is similar to one filed in 1997 by black farmers, called the Pigford case, which resulted in a record civil-rights settlement just two years later. The settlement has allowed more than 14,000 plaintiffs to share in almost $1 billion in compensation, through grants and loan forgiveness.

The Keepseagle case was granted class-action status in 2001. Attorneys for the plaintiffs say the class could ultimately cover tens of thousands of Native American farmers and ranchers who may have been discriminated against by the USDA, dating back to 1991. And if the lawsuit is successful, they say damages could be worth hundreds of millions of dollars.

But unlike the Pigford case, the Keepseagle suit has languished in the courts for nearly eight years. Attorneys for the plaintiffs accuse government lawyers of using just about every delaying and stalling tactic available.

They suggest a couple of reasons for the difference in the federal government's attitudes toward the two lawsuits. The Pigford case was filed against the Clinton administration, which attorneys say was more sympathetic to claims of racism. In fact, under the direction of then-Secretary of Agriculture Dan Glickman, the USDA formed its own internal Civil Rights Action Team to investigate claims of racism and discrimination. Its 1997 report detailed findings of systemic mistreatment of minority farmers, helping lay the groundwork for the lawsuits.

Another reason given for the rather quick settlement in with African-American farmers is that black leaders and lawmakers kept up the pressure to settle, while the media focused on the case as well. Meanwhile, the Keepseagle case has received almost no national media attention.

Adding salt to the wound, Claryca Mandan says, is that the USDA recently settled a lawsuit and agreed to changes in practices in order to protect endangered wildlife.

"We're citizens of this country as much as anyone," she says. "We don't get the respect that a duck would get."

While waiting for their day in court, the Mandans note that many Native Americans continue to lose their ranches and farms to government foreclosures. Of the 150 or so on the Fort Berthold Reservation who were initially members of the class-action lawsuit, they say only a very small fraction are still actively engaged in agriculture.

Claryca Mandan says the lawsuit is not about money, or a way for Native Americans to get rich quick. She says it's about the land, which she and her husband Keith want to pass onto the next generation.

"We want to be able to go to our graves knowing that our children are on the same equal footing as non-Indians, and that they can keep our land in the family and keep on ranching," she says, adding, "Our whole culture is embedded in agriculture, and we want to pass that onto our children."

That day in court may be coming soon. Attorneys for the government and the Native American plaintiffs will go before a magistrate in Washington on Nov. 28 to try to iron out differences over discovery. They'll appear before the judge overseeing the case next month, with the hopes of finally setting a trial date, which the plaintiffs hope can begin next year.