Accessibility links
Up Close and Personal with the Albatross In literature, albatrosses represent weighty, inescapable burdens. But in real life, the huge seabirds use wind energy to cruise around the planet's oceans. Photographer Frans Lanting and writer Carl Safina report from one of the world's largest albatross colonies.

Listen
Up Close and Personal with the Albatross 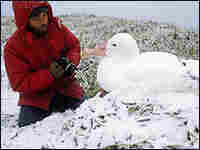 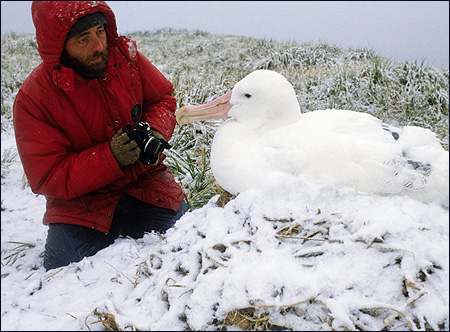 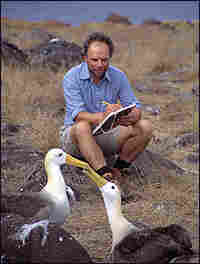 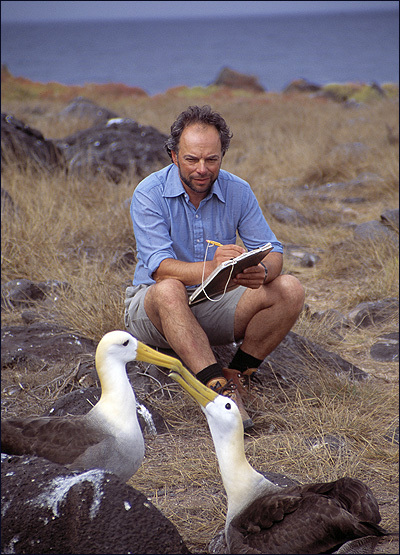 Writer Carl Safina with a pair of seabirds, who've, no doubt, logged tens of thousands of flight miles.

What we know about albatrosses, we largely know from literature -- perhaps most famously from Samuel Taylor Coleridge's 1798 poem The Rime of the Ancient Mariner. The albatross was considered an omen of good luck to sailors, and yet the mariner shoots one. The senseless killing brings a deadly curse upon his ship, and as a punishment, he is forced to wear the dead albatross around his neck, forever a supernatural reminder of his trespass.

Nature photographer Frans Lanting has a more lighthearted view of albatrosses. He sees the huge seabirds as the planet's "ultimate frequent flyers."

"These birds don't flap their wings, they use wind energy," Lanting says. "It costs them almost no energy to get around, and they fly phenomenal distances. An average black-browed albatross may cover 100 miles a day during its lifespan of more than 40 years."

Over a lifetime, an albatross may cover 1.5 million miles.

Lanting, along with writer Carl Safina, is currently immersed in the world's second-largest albatross breeding ground in the Falkland Islands, some 300 miles off the Atlantic coast of South America. The birds, which have wing spans of up to seven feet, can be found all over the world. But they shun the chaos of continents when it comes to breeding.

"Albatrosses just do not seem to like land very much. They come to land only if it involves sex," says Safina, author of Eye of the Albatross.

More than 170,000 breeding pairs of black-browed albatrosses are believed to nest on the Falklands' Steeple Jason Island, all with very individual lives, says Lanting.

"Every bird has its own story," says Lanting. "I can see adults coming back from the sea and working their way into the colony to meet up with their partners. I see younger birds that are looking for mates, trying to establish nest sites of their own. It's a society, a society of seabirds."

Lanting and Safina are studying what albatrosses do, both out in the huge ocean and in their breeding-ground societies -- with an eye on albatross survival. Nineteen albatross species are in decline, mostly due to commercial fishing vessels that use long lines that hook and drown the birds the birds.

For some species, Safina is optimistic about their survival.

"We have time, and we have the technology already to tackle that problem if we choose to," he says.

But other species, such as the wandering albatross, are near catastrophic lows.

"For some of them, time is of the essence, or else we'll lose something that is extremely special and that we won't be able to get back again," Safina says.