Accessibility links
Holiday Movies: Intrigue Plus Treacle The year 2006 is unlikely to set any box office records, but it's on track to break the $9 billion mark for only the fourth time in history -- that is, if the holiday films that open before the end of this year do business. 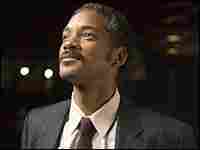 Play misty for me: Will Smith stars in The Pursuit of Happyness (yes, it's supposed to be spelled that way). Columbia Pictures hide caption 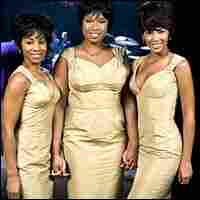 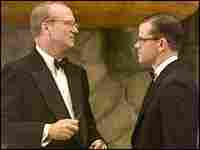 James Bond has played poker, Borat has raised hackles, penguins have danced -- and together, they've managed to help Hollywood bounce back from last year's box-office slump. 2006 is unlikely to set records, but it's on track to break the $9-billion mark for only the fourth time in history -- that is, if the holiday films that open before the end of the year do business.

Hollywood is starting the season with a film that's about the season. Catherine Hardwicke, a director known for movies about teenagers, turns her attention to teens some 2,000 years ago, who are dealing with an unexpected pregnancy on a lonely road far from home. Their names: Mary and Joseph. Their story: The Nativity Story, which is a (shall we say) by-the-book recounting of the events leading up to the birth of Jesus. (Mary is played by Keisha Castle-Hughes, grown up since she charmed critics in the 2002 film Whale Rider.)

The Good Book is just one of many that will be brought to the screen for the holidays. Among the others, The Painted Veil, W. Somerset Maugham's novel about a young doctor who takes his wife deep into China in the 1920s, to punish her for having an affair.

Meanwhile, in the screen version of The Good German, George Clooney finds himself on the other side of an affair -- one that gets him involved in black market intrigue in post-war Berlin.

That's something you could also say about Children of Men, which leaps from page to screen with a portrait of a future in which man doesn't seem to have a future. It's a dystopia in which women have become infertile, and the youngest person on the planet is 18 years old, which makes global warming seem almost irrelevant, no?

And while we're talking books, let's not forget the children's classic Charlotte's Web, which arrives on screen with its live-action barnyard populated by such vocal talents as Oprah Winfrey, Robert Redford, John Cleese and Julia Roberts.

Also for kids are a couple of pictures with less literary pedigrees: An animated film called Arthur and the Invisibles, about a boy on a quest for treasure in his own backyard; and a slapstick comedy called Unaccompanied Minors, about an airport staff that has to deal, the day before Christmas, with a whole plane full of, well... unaccompanied minors.

Happily for parents, there are lighthearted films for adults too, including: A star-studded, house-swapping romance called The Holiday; a May-December romantic comedy, Venus, that's prompting Oscar talk for Peter O'Toole; and a special effects comedy, Night at the Museum, that seems to want to be this year's Ghostbusters.

Also relying on digital effects are a trio of spectacles: Eragon, in which a farm boy fights dragons in a mythical kingdom; Pan's Labyrinth, which expores the fantasies of a little girl during the Spanish Civil War; and Curse of the Golden Flower, the latest martial-arts pageant from Chinese director Zhang Yimou.

Another picture that's said to be pretty spectacular, although without so many digital effects, is Mel Gibson's Apocalypto, a portrait of human sacrifice in the end times of the Mayan Empire. And sacrifice in pursuit of precious gems is what spurs Leonardo DiCaprio in Blood Diamond. (It also gives him a chance to try on a new accent. A few weeks ago in The Departed, he sounded Bostonian, this time he's South African.)

If the grandness and the suspense that are everywhere this holiday season seem like too much, there will also be what looks like a heaping helping of Christmas treacle, as Will Smith plays a homeless dad in The Pursuit of Happyness; a college comes back from a horrendous football tragedy in We Are Marshall; and a sports figure we all thought was finished returns. Yes, Rocky Balboa is back for one more (!) final jab at glory, with Sylvester Stallone both in front of the camera and behind it.

Stallone joins two other actors who will be sitting in the director's chair this Oscar season: Robert De Niro with his CIA story The Good Shepherd and Clint Eastwood with the Japanese side of his Flags of Our Fathers story, Letters from Iwo Jima.

But what's garnering the most Oscar talk is the film version of a Broadway musical from the 1980s, about a group not unlike the Supremes, called the Dreams. They are Dreamgirls, dreaming of success on the "One Night Only" that matters -- Oscar night -- just like all the other kids in Tinseltown.