Accessibility links
Tobacco Barns: Stately Relics of a Bygone Era The tobacco crop is quickly disappearing from the farm fields of Kentucky. But tobacco barns, in various states of repair, stand proudly on the landscape as icons of family farming. 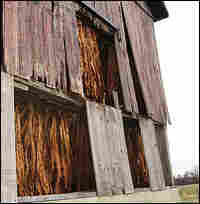 Tobacco barns have a lot of open spaces, and you can tell when they're empty. But some, like this one in Kentucky's Bourbon County, have racks of golden crisp leaves hanging inside. Noah Adams, NPR hide caption 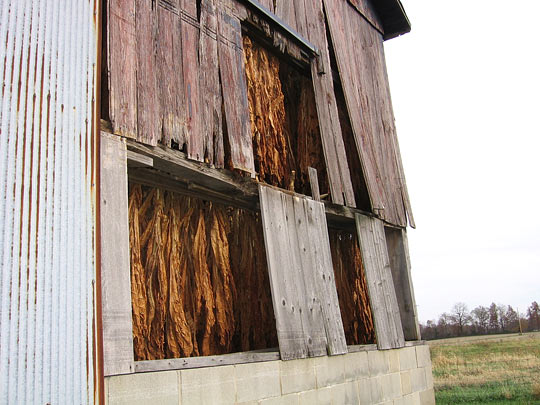 Tobacco barns have a lot of open spaces, and you can tell when they're empty. But some, like this one in Kentucky's Bourbon County, have racks of golden crisp leaves hanging inside.

A Note about the Music

Around each curve in rural Kentucky, it seems, there's another tobacco barn. Many of them are like old gentlemen — still handsome but kind of falling in on themselves.

There was a time in Kentucky when November meant tobacco money. Burley tobacco for cigarettes, cash money for the farm. But now, many of the old warehouses are dark and cold. Auctioneers' chants are audio of the past. In the early 1990s, there were about 60,000 tobacco farmers in Kentucky. Last year, there were about 10,000.

Henry County along the Kentucky River is home to one of the remaining active barns. Smoke is in the air and Regina Sharp is hard at work stripping tobacco leaves. A visitor may find the smell to be lovely, but Sharp doesn't share that sentiment. When it's dry and the stove is going, your nose feels like it's on fire, she says.

Tobacco barns are finding new uses. For some people, they're a place to dry garlic.

Betty King lives in one. She bought the land and thought, why not fix up an apartment in the barn?

"Barns are so beautiful; I hate to see those disappear from the landscape," she says. "I don't get the tobacco smell, but I do look up at some of the rafters and see strays of tobacco from years past hanging down. I feel good because it is part of history, and I left as much as I could with the original beams showing. I'm not a smoker and I don't promote smoking, but I think there's part of that culture that I'm pleased to have preserved."