Accessibility links
Adventurers Cross the Globe by Foot and Hand It took them two years, but Colin Angus and Julie Wafaei are the first people to circumnavigate the globe completely by self-propulsion. That means they rowed across the Atlantic -- no sails. And biked and hiked across Siberia.

Listen
Adventurers Cross the Globe by Foot and Hand 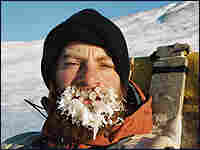 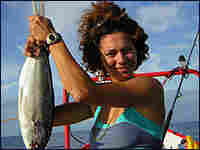 It took them two years, but Colin Angus and Julie Wafaei are the first people to circumnavigate the globe completely by self-propulsion. That means they rowed across the Atlantic -- no sails. And biked and hiked across Siberia. And for that accomplishment, Angus and Wafaei, who are engaged, have been named "Adventurers of the Year" in the new issue of National Geographic Adventure magazine.

Here, an excerpt from Alex Chadwick's interview with Angus and Wafaei:

What is your inspiration for doing this?

Colin Angus: People have gone all around the world in all different forms of human- powered transportation. However, they're always broken-up journeys, like bicycling or jogging, for example. It's always on the land masses, but always there's that aquatic barrier. Nobody had ever gone around the world entirely by human power, which includes rowing or going in some kind of paddle craft across the oceans.

Did it seem to you realistic to row all that way across the Atlantic -- because you do encounter these terrific storms.

Julie Wafaei: We ended up rowing across the Atlantic during the worst hurricane season in all of recorded history. It was the year of Hurricane Katrina. And unfortunately, we were hit by four storms including two hurricanes. There's not much you can do when you're in a rowboat out on the Atlantic and a hurricane is approaching. All we could do is batten the hatches and ride out the storm inside our cabin. And it's a pretty small cabin. Unfortunately, it's sized a little bit like a double coffin. So we spent three and a half days riding out the hurricane, the first one, in that cabin.

Colin, I was very impressed that you managed to retrieve the fishing lure that turned out to be so important for you, because the trip takes a little bit longer than you had expected. So you're kind of running out of food, and the only thing you can do is fish. But then there's a problem …

Angus: That's right. Fishing was a major source of sustenance out in the ocean, and one of the fish actually broke the line, and it was the last hook and lure we had, so we were devastated. And so we watched the fish, and he swam away and he kept jumping out of the water shaking his head until finally he shook that lure free, and I jumped off the side of the boat and swam after it. And got it back. So it was pretty exciting.

So you bicycle across all of Russia. And Europe to Portugal. You get back in a boat and row across the Atlantic, aiming for Miami, and you hit Central America. And then you get off the boat and get onto bicycles and ride all the way north again. What is it that you crossed in that time that was most surprising to you?

Wafaei: One of the most pleasant surprises was the friendliness and the hospitality of people all around the world. And really, if it wasn't for that, this journey would not have been possible. In all 17 countries we went through, people helped us out in various ways. So that was a beautiful surprise.

You both look very fit ... But aside from that, I wonder if you think you have some special qualities that enabled you to do this?

Angus: I think an expedition like this, 90 percent of it is in the head. Like anybody who is a regular fit suburbanite, you know, maybe exercising an hour a day, I think would have what it takes. It's just having to push on, push on day after day after day. It is really grueling, and it takes a lot of mental focus just to continue on with a journey that's basically the work of a marathon every day, day after day, seven days a week, 365 days a year. And, whenever we do take a break from the actual pushing forward, we're working on the logistical side of the expedition, so it's pretty tough.

So you've completed this journey now. What did you get out of it?

Angus: There are two things really we got out of it. Of course, there's the sense of accomplishment when you finally get to the end. You start from a certain spot on the planet, and two years later you arrive there again. You're right back where you began, and you finish with a collection of memories and experiences that have, of course, changed you. It's wonderful to sort of be able to reflect back on that. But also, it's just having been out there and having had this wonderful response from people who have followed our expedition and made changes in their own lifestyles to reduce their greenhouse emissions by riding their bicycles or walking to work. That was one of the objectives of our journey, to promote zero or low-emissions transportation.