Accessibility links
Build Your Own Universe : Krulwich Wonders... Physicists agree, one day it may be possible for a person to create a universe. It won't happen tomorrow, but the idea is in the works. There's already one problem with the idea: If a universe is created, physicists say they wouldn't know how to communicate with it.

Listen
Build Your Own Universe 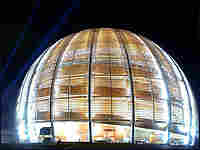 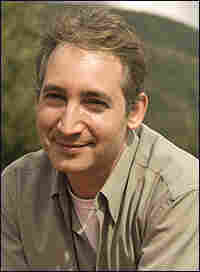 Columbia University physics professor Brian Greene says if given the chance to build a universe, he would find it hard to resist. Lynn Goldsmith/Corbis hide caption

Is this a joke? No, say a bunch of physicists. One day, it may be possible for a person to create a universe!

This is not going to happen tomorrow. Not even close. But according to Columbia University physics professor Brian Greene, it is theoretically not impossible (which is his way of saying the possibilities are not zero) that one day, a person could build a universe.

The very idea is so startling it's hard to know what this means.

Think about it this way: One day (far off, no doubt), it may be possible to go into a laboratory on Earth, create a "seed" -- a device that could grow into a universe -- and then there would have to be a way to get that seed, on command, to safely expand into a separate, infinite, unexplorable but very real alternate universe.

This isn't Greene's notion. But he was willing to describe, in very broad outline, how it might work.

The seed, he suggests, could be a black hole. Not the big black holes that sit near the centers of so many galaxies, but what he calls a "mini black hole." Black holes, he says, don't have to be big. They can, in theory, be very small.

I asked him how small, and together we conducted an imaginary (very imaginary) experiment. If you listen to my interview, you will hear us build a mini black hole from an ordinary watermelon.

It's a fanciful experiment done with imaginary sound effects, but it playfully suggests these mini black holes might be manufactured one day. There may even be a real-life attempt. Plans are afoot to detect mini black holes at the new Large Hadron Collider in Switzerland.

Greene also describes a kind of energy, called a "repulsive force," that might be capable of turning that seed into a new universe. The problem is, no one is yet sure how this force works or why. But Eduardo Guendelman, a physicist at Ben Gurion University in Beer Sheva, Israel, and Nobuyuki Sakai and his team at Yamagata University in Japan are working on the problem right now.

But suppose it is possible to create something that grows infinitely and becomes a universe somewhere else, why do it if you can't go and visit your creation? If you can't pop in, take a look and come back, why bother?

"I sat down and really thought about why we should even care about creating a universe in the laboratory, " he told New Scientist, "We don't seem to be able to communicate with it at all."

Once it's formed, the inventor couldn't meet its inhabitants, mine its minerals, collect souvenirs or judge his or her success. The biblical god who many believe created our universe inspected us on the first through sixth day and decided that what He'd done "was good."

That's not an option for the human scientist who creates.

So why do it? Well, Greene says given the chance to make a universe of his own, "I might have a little trouble resisting this possibility. Just because it's so curious, this idea that because of your volitional act, you are creating a universe that could give rise, perhaps, to things we see around us."

Linde seconded that in his New Scientist interview.

"Just imagine if it's true and there's even a small chance it really could work," he said. "In this perspective, each of us can become a god."

Oh, the vanity of it all!