Accessibility links
Behind Guaraldi's Timeless Holiday Soundtrack On Tuesday night, a tradition continues: ABC airs the animated special, A Charlie Brown Christmas. Its jazzy Vince Guaraldi soundtrack is a holiday staple, too, but it wasn't embraced by all who first heard it. 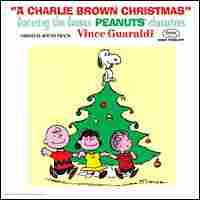 On Tuesday night, ABC airs what is now a holiday tradition: the animated special A Charlie Brown Christmas, which first aired on CBS in 1965. The show's jazzy soundtrack is a familiar holiday staple, too — but Vince Guaraldi's classic score almost never made it on the air.

Lee Mendelson first paired Guaraldi's music with the Peanuts comic-strip characters for a television documentary about artist Charles Schulz and his pioneering strip.

Excited by the results in the documentary, Mendelson, Schulz and animator Bill Melendez set to work on a Christmas special that featured more of Guaraldi's music. But the network hated both the special and the music.

He says the network also objected to the adult themes; they didn't think the topics of materialism and faith were appropriate for children.

Despite their concerns and after a few cosmetic changes, CBS aired the program. It was a hit.

Mendelson and Melendez went on to do 50 Charlie Brown specials, the most recent being last year's He's a Bully, Charlie Brown.

Guaraldi collaborated on 17 shows before he died suddenly at age 43 in 1976 — too early to see his songs become modern symbols of the holiday.

Guaraldi's soundtrack to A Charlie Brown Christmas has never been out of print since it was released 41 years ago. This year, it has been re-released with bonus alternate takes of the classic songs.