Accessibility links
Could Tiger Farms Save a Species? Poachers who sell tiger parts to make Asian medicines are wiping out the big cats. One group in India thinks salvation may come from tiger farms that could make the black market unprofitable. But other conservationists say legalizing the tiger trade would just increase market demand.

Listen
Could Tiger Farms Save a Species? 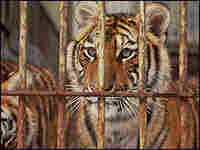 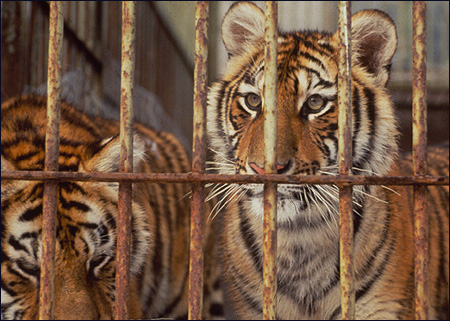 Tigers on a fur and tiger farm in China's Heilongjiang Province.

Tigers on a farm in China attack a cow released from a truck. YouTube hide caption

Conservation experts say the wild tiger may be headed for extinction. Twenty years ago, there were tens of thousands of these big cats in the wild. Today, there may be fewer than 3,000.

One of the biggest threats to wild tigers is poachers, who kill the animals with snares and poisons. Almost every part of a tiger can be sold. But by most accounts, it's the booming black market for traditional Asian medicines, such as tiger-blood wine and powdered tiger bone, that keep the poachers in business. Attempts to close this market by cracking down on poachers and banning products made from tiger parts have failed, especially in China.

Some conservationists say it's time to take a radical step to save the wild tigers: Legalize the sale of tiger bones and organs taken from the carcasses of big cats raised on Chinese tiger farms.

"There are roughly 4,000 tigers living on these farms, which means about 300 to 400 tigers die a natural death each year," said Barun Mitra of the free market Liberty Institute in New Dehli, India. "The question is: What do you do with their bones and carcasses?"

Mitra wants to flood the traditional medicine market with those bones and carcasses. So do the owners of the 14 registered tiger farms in China. Mitra says prices will fall sharply if it happens. If prices fall far enough, tiger poachers will be undersold. If that happens, they'll stop killing tigers in the wild because they can't make money from it.

Mitra says the profits from the legal sales could help fund beefed-up anti-poaching programs, or nature programs that turn former poachers into park guards in the tiger's range. In other countries, these kinds of programs bring in millions every year.

"If even a fraction of that kind of money made its way to rural parts of India and China, you would see a sea change in attitudes" toward the wild tiger, says Mitra.

Mitra is the unofficial spokesman for the plan to save wild tigers by selling bones and organs from the tame ones. Recently, he toured some of China's tiger farms at the invitation of the Chinese government. China has no official position on the plan to open a market for farm-tiger parts, but conservationists and representatives of other governments say it's clear that the Chinese government likes the plan, as do the owners of the tiger farms.

Most of China's tiger farms are open to the public. At the biggest farms, busloads of visitors drive around with big groups of tame tigers following behind. In others, according to Grace Gabriel of the International Fund for Animal Welfare, tourists pay to watch gangs of tigers shred cows dumped out of passing trucks.

Gabriel thinks these practices are inhumane and that the parks should be closed. She also worries that a legal trade in farmed tiger parts would lead to increased poaching, since there's no way to certify that a particular container of tiger-blood wine or powdered tiger bone came from a farmed animal.

"It could come from wild tigers just as easily," Gabriel says. "It's going to make law enforcement (much) more difficult."

Gabriel doesn't think the owners of the tiger parks will agree to funnel any of the profits from these sales into beefed-up anti-poaching programs or into nature programs in the wild tiger's range. And she doesn't think the market-based plan to sell farmed tiger parts makes any economic sense.

That's a point that should be underlined, says economist Richard Damania of the University of Adelaide. He says there's no way a poacher who spends a maximum of $20 to kill a tiger will ever be undersold. Tiger farmers have to feed their animals from birth to death, which can costs thousands.

"That gap is so wide that it can never be closed," Damania said, "even if you factor in the cost of hunting down a tiger in the wild."

Farms Could Drive Up Demand

If anything, Damania says, the Mitra plan will lead to increased poaching by attracting a lot of buyers who would never think of purchasing anything on the black market. That would drive up demand, which would in turn drive up prices, he says. The incentive to poach would rise, and more wild tigers would be killed.

Damania says wild tigers living inside small preserves could be wiped out by poachers in a matter of years. Tigers living in bigger protected areas might manage to hang on, but not for very long.

"This new plan would be a death sentence," for the world's wild tigers, says Damania. But Barun Mitra of the Liberty Institute thinks those wild tigers may already be doomed, so why not gamble with the farming plan?

"I cannot understand how such an enormous and valuable economic asset can be left to rot" because of a ban on sales, he said, referring to the tiger carcasses he saw lined up in warehouses at some of the Chinese tiger farms.

One thing everyone involved in this debate agrees on is that poachers aren't the only threat facing the wild tigers of the world. For example, since the 1990s, nearly half of the lands the wild tigers used to live on have been cleared and occupied by people.

'Sell the Tiger to Save it,' New York Times Editorial by Barun Mitra
Save the Tiger Fund
International Fund for Animal Welfare