Accessibility links
Larger-Than-Life Sheriff Rules Louisiana Parish There's nobody quite like Harry Lee, the flamboyant and outspoken sheriff of Louisiana's Jefferson Parish. The Chinese-American lawman has a penchant for putting his foot in his mouth, but it only seems to increase his popularity. 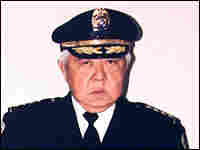 Harry Lee, the outspoken and flamboyant Chinese-American sheriff of Louisiana's Jefferson Parish, has been a lightning rod for controversy during his 26 years in office. Jefferson Parish Sheriff's Office hide caption 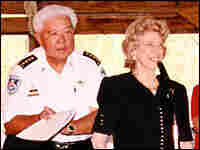 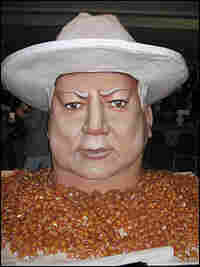 A papier-mache model of Lee's face was a decoration at his recent birthday bash, an annual event known as the Chinese Cajun Cowboy Fais Do Do. John Burnett, NPR hide caption

He's the flamboyant and outspoken sheriff of Louisiana's Jefferson Parish, a sprawling suburb that borders New Orleans. The Chinese-American lawman, now in his seventh term in office, has a penchant for putting his foot in his mouth, but it only seems to increase his popularity.

The 74-year-old, 300-pound sheriff — down from 400 pounds, he proudly points out — sits at his desk surrounded by his large gun collection.

For 26 years, Lee has been the top cop and chief taxing authority of the booming jurisdiction of nearly half a million people, and because of peculiar state law, there's little oversight.

"The sheriff of [Jefferson Parish] is the closest thing there is to being a king in the U.S. I have no unions, I don't have civil service, I hire and fire at will. I don't have to go to council and propose a budget. I approve the budget. I'm the head of the law-enforcement district, and the law-enforcement district only has one vote, which is me," he says.

Columnist James Gill of the Times-Picayune in New Orleans has written often over the years about the sheriff.

"He's a great character, everyone likes him. Some people fear him. He can be sheriff of Jefferson Parish for as long as he wants. Harry Lee has always been a law unto himself," Gill says.

Lee is a former restaurant and tavern owner, former federal magistrate, and former protege of the late U.S. House Majority Leader Hale Boggs. In Jefferson Parish, Lee is well known for his personal Mardi Gras float; outside the parish, he's famous for his mouth.

Twenty years ago, after a rash of robberies by black men of white residents in their driveways, Lee vowed to stop and question blacks driving "rinky-dink cars" in white neighborhoods. The NAACP called on him to resign. Lee called a press conference the next day and said his plan was a mistake.

"We know the crime is in the black community. Why should I waste time in the white community?" Lee was quoted as saying.

Since Hurricane Katrina, murders in Jefferson Parish have doubled, the majority of them black-on-black killings. The sheriff tried, in vain, to explain his intended get-tough tactics the next day at a press conference inside his gray, fortress-like headquarters.

"We know where the problem areas are. If we see some black guys on the corner milling around, we would confront them," he said.

The president of the regional NAACP, Donatus King, wasn't buying it.

"Confronting a group of black people on the street corner merely because they're black and milling around is a form of racial profiling. The NAACP opposes that tactic," King said.

Under pressure, the sheriff said his deputies would not be indiscriminately frisking African-American males.

A few days later, the Times-Picayune ran an unscientific poll. The phone calls ran 22 for the NAACP, 789 for Harry Lee.

Jefferson Parish is overwhelmingly white. In 1989, the parish elected David Duke — the former Ku Klux Klan leader — to be its state representative.

Lee is lauded for keeping crime low, which means, to most people, keeping black criminals under control, says columnist James Gill, who lives in the parish.

"This parish grew largely as a result of white flight, and it retains some of that feel of the 1950s today in its attitudes," Gill says. "And Harry's popularity depends, to some extent, on the perception that he is a white man's champion, he is holding back the black hordes that might otherwise threaten suburban bliss."

From a distance, it's tempting to pigeonhole Harry Lee as a racist Southern sheriff. But up close, he's more complex.

Angela St. Hill is an African-American resident of Jefferson Parish. As a lay worker on social justice issues with her Catholic church, she's worked with Harry Lee. She says that although he may sound racist at times, Lee has a good reputation of trying to solve problems in the black community.

"The African-American community knows that most of the time, he's doing the right things for right reasons, even though his words may not show that," St. Hill says.

"Unfortunately, I think he talks a lot before he thinks about what he's saying."

Harry Lee — the son of Lee and Yip Shee Bing, owners of a New Orleans laundry — shrugs off the criticism.

"It's more difficult for somebody to accuse me of being a racist, when you figure I was born in the back room of a Chinese laundry. When I was a kid, I was called a 'chink,'" he says.

Today, Lee has perhaps the highest approval ratings of any politician in the state. Every year, he throws a birthday party for himself at the Hilton Riverside Hotel in downtown New Orleans. Now that former Gov. Edwin Edwards is in prison, Lee's Chinese Cajun Cowboy Fais Do Do is the last great political party in Louisiana.

Five-thousand people pay $100 each to listen to two bands, drink prodigiously, and gorge on gumbo and egg rolls. Lee raises several hundred-thousand dollars, with which he funds his re-election campaigns, and gives the rest to charity.

And in the ballroom entrance: a huge papier-mache head in the likeness of the sheriff, surrounded by piles of fortune cookies.