Accessibility links
The Vegetable World's Ugly Duckling: Celeriac Celeriac is the unsung frog prince of winter vegetables. Pare off its warty exterior and you'll uncover the royal vegetable within: a perfect, ivory-fleshed, winter alternative to potatoes and other starches. 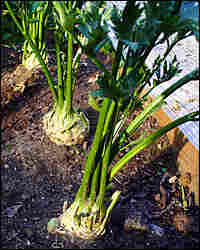 Celeriac -- also known as celery root, knob celery and turnip-rooted celery -- is cousin to anise, carrots, parsley and parsnips. In winter, it's a great alternative to potatoes and other starches. Jack Staub hide caption 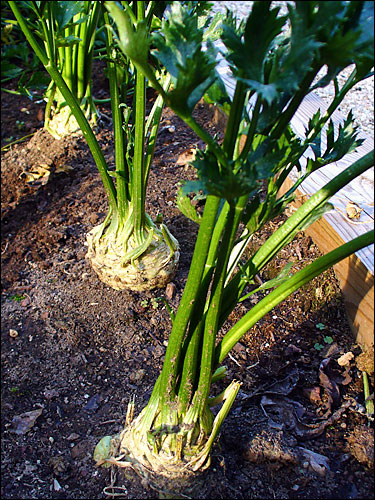 Celeriac -- also known as celery root, knob celery and turnip-rooted celery -- is cousin to anise, carrots, parsley and parsnips. In winter, it's a great alternative to potatoes and other starches. 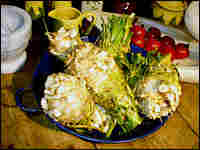 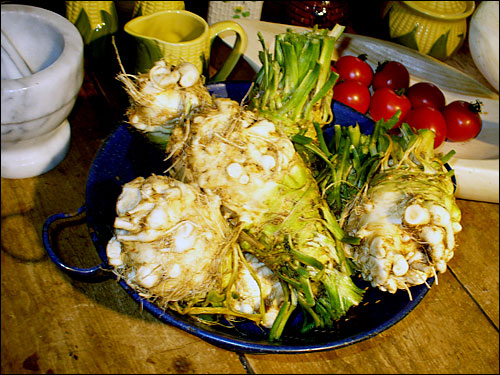 Jack Staub is an expert on vegetables and vegetable garden design. His column "Farm Diary" appears monthly in Pennsylvania's New Hope Gazette, and his vegetable and herb gardens at Hortulus Farm in Wrightstown, Penn., have been featured in many publications. His book 75 Exciting Vegetables for Your Garden was published by Gibbs Smith in 2005, and the sequel, 75 Remarkable Fruit Trees, Plants, & Shrubs for Your Garden, will be published in 2007.

Greet celeriac, the unsung frog prince of winter vegetables. Pare off its warty exterior and you'll uncover the royal vegetable within: a perfect, ivory-fleshed, winter alternative to potatoes and other starches.

It is surprising that a vegetable that is so delicious, wonderfully hearty and eminently storable -- and makes such a boldly verdant show in the garden -- is practically unrecognized in the try-anything United States.

In Europe, however, celeriac is a historic favorite. The vegetable's most classic employment is in the cold French salad celerie remoulade, in which the root is peeled, grated, "cooked" in lemon juice (or blanched briefly in acidulated water) to lose a bit of its rawness, then dressed with a mustardy mayonnaise.

Celeriac is cousin to anise, carrots, parsley and parsnips, some of which are bred for their edible stalks and tops, others for their edible roots. Celeriac is a celery variety refined over time to produce an increasingly large, solid, globular root just below the soil surface.

Also known as celery root, knob celery and turnip-rooted celery, celeriac developed from the same wild species as did stalk celery. It had medicinal and religious uses in many early civilizations, including those of Egypt, Greece and Italy.

While what the early Greeks called selinon is mentioned in Homer's Odyssey in 800 B.C., celeriac did not become an important vegetable until the Middle Ages. It was first recorded as a food plant in France in 1623, and was commonly cultivated in most of Europe by the end of the 17th century.

Admittedly, celeriac does have a couple of slight drawbacks. If you are going to grow it, it is a rather long-season plant, clocking in at about 112 days from seeding. It's also rather odd-looking.

Aboveground is a gorgeously symmetrical crown of green, celery-like growth radiating from the central knob to about 12 inches. However, pull up this pretty green crown and what you unearth looks like a troll's orb of warts and roots.

Do not be dissuaded. When peeled, celery root's creamy white flesh resembles that of a turnip and tastes like a subtle blend of celery and parsley. Additionally, half a cup contains only 30 calories, no fat and provides an excellent source of dietary fiber.

This time of year, celeriac can be a perfect non-starch substitute for potatoes in a warming meal, and can be prepared in a similar way. Mashed, shaped into batons and boiled, or even French fried, celery root can provide a winning accompaniment to a fresh green vegetable or salad and anything roasted or grilled.

I find a paring knife, rather than a peeler, works best for peeling the root. Shave downward with the blade in broad strokes to remove the thick skin. Drop the peeled bits into a bowl of acidulated water (water into which some lemon juice has been squeezed) immediately after cutting to prevent discoloration. Even if you are planning to fry or bake the celeriac later, parboiling it first for 5 or 10 minutes in acidulated water will soften its raw edge.

When peeled and cooked, this ugly duckling vegetable will become a true culinary swan. 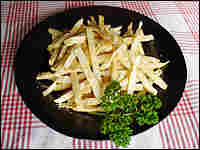 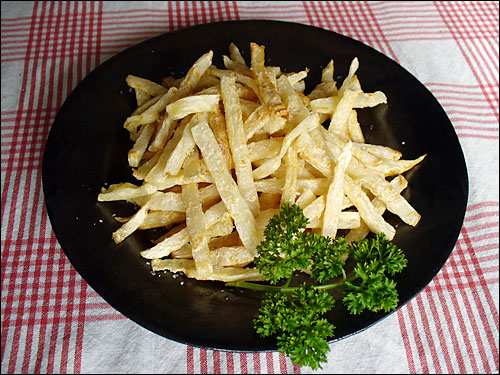 Juice 1/2 lemon into a big pot of water and put it on to boil.

Julienne the peeled roots by using a mandoline (a device with adjustable blades) on the French-fry setting. If you don't have a mandoline, peel the roots, cut them into 1/4-inch slices, then into 1/4-inch sticks, and put them in a bowl of acidulated water.

Add celeriac to the pot of boiling water and blanch for 5 minutes. Drain and dry well.

In the same pot or a deep-fryer, heat the vegetable oil until smoking (about 350 degrees) and start deep frying in batches until golden. Drain on paper towels and sprinkle with salt. Reheat in the oven before serving.

Boil cubed celery root and potato in a large covered pot until soft. Drain thoroughly and return to pot. Add cream, butter, salt and truffle oil, and mash and whip until integrated and smooth.

Dredge the diced apple in the flour. Add 1/2 cup of oil to a saute pan and heat over high heat until smoking. Add apple bits and "flash" fry (quickly over high heat) until crisp, about 2 minutes. Drain on paper towels.

To serve, reheat the mashed celeriac until warmed through, transfer to a bowl and sprinkle the apple bits over the top.

Boiled Celeriac with Butter and Herbs

Juice of 1/2 lemon, plus extra for acidulating water

1/2 cup chopped parsley, chives, tarragon, mint, lemon balm or basil (you can pick one or use two in a savory combination)

Fill large bowl with water and add lemon juice. Add celery roots as they are peeled.

Bring a large pot of salted water to a boil.

Shape the sticks into "batons" by shaving off the square "corners" and pointing the ends (like sharpening a fat pencil) with a paring knife.

Place the batons in the boiling water. Add juice of half a lemon. Bring water back to a boil, then reduce heat and cook until batons are soft but not mushy, about 30 minutes. Drain thoroughly and return to the pot.

Add butter, herbs of choice, and salt and pepper to taste. Heat through before serving. 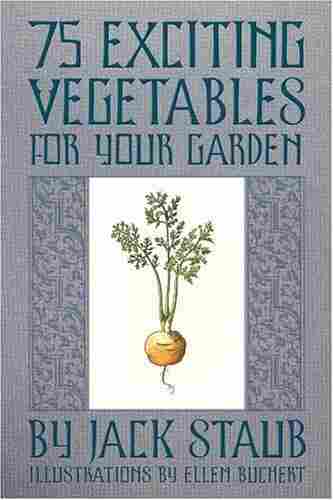 75 Exciting Vegetables For Your Garden