Accessibility links
Pope Seeks to Boost Image Among Muslims Pope Benedict XVI's trip to Turkey was originally intended to focus on links with the Orthodox Christian church. But it has been expanded to cover relations the Muslims.

Pope Benedict XVI's trip to Turkey was originally intended to focus on links with the Orthodox Christian church. But it has been expanded to cover relations the Muslims.

John Allen, the Vatican Correspondent for the National Catholic Reporter, talks to Renee Montagne about the trip. 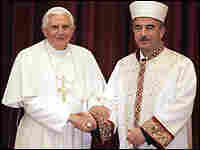 He was greeted at the airport by Turkey's Prime Minister Recep Tayyip Erdogan. There have been protests around Turkey opposing the visit this week, and until recently it was unclear whether the prime minister, who represents an Islamic party, would even meet with the pope.

The four-day visit was originally planned as a chance for the Vatican to reach out to Turkey's dwindling Orthodox Christian community, but it took on greater political significance after Benedict gave a speech in September which many Muslims found insulting.

Erdogan said after the meeting that he had gotten the pope to endorse Turkey's bid to become the first majority Muslim country to join the European Union. Benedict had said earlier that granting Turkey EU membership would be a mistake.

The pope's visit to a country that is 95 percent Muslim is timely and important, Erdogan said, especially in an era when the world is becoming increasingly polarized and the culture of violence is spreading.

After the meeting, the pontiff perfomed a ritual expected of all visiting heads of state, laying a wreath at the enormous tomb of Mustafa Kemal Ataturk, the secular general who founded the modern Turkish Republic.

Both Turkey's dwindling Christian minority, and members of its Muslim majority, accuse the strictly secular Turkish state of restricting their religious freedoms.

To this day, Turkey refuses to recognize the spiritual head of the Orthodox Church, the ecumenical Patriarch Barholomew, who will host Pope Benedict in Istanbul later this week.

The pope did make a careful call for religious freedom Tuesday, but that message remained overshadowed by a speech he gave in September. In it, he quoted a Byzantine emperor who described Islam as evil, inhuman and said it was spread by the sword. That speech was the source of the protests earlier this week.

In an effort to improve relations with Muslims, Benedict met with Turkey's top Muslim cleric, Dr. Ali Bardakoglu, who pointedly warned the pope that fear of Islam is on the rise.

"Islamophobia promotes such notions that Islam encourages violence, that Islam has been spread by the sword," Bardakoglu said. "Every Muslim is very much offended by such accusations."

"May we come to know one another better," the pope responded. "Strengthening the bonds of affection between us and our common wish to live together in harmony, peace, and mutual trust. As believers, we draw from our prayer, the strength that is needed to overcome all traces of prejudice."

The pope will remain in Turkey for the rest of the week, visiting Ephesus, the site of a shrine where Mary, mother of Jesus, is believed to have lived out her final days, and Istanbul.