Accessibility links
A Tale of Two U.S. Muslim Women: To Cover or Not? The wearing of headscarves by Muslim women has caused turmoil in Europe. In the U.S., too, it remains a difficult and intensely personal decision. In Dearborn, Mich., two women, both devout Muslims, have come to different conclusions about the wearing of hijab.

Listen
A Tale of Two U.S. Muslim Women: To Cover or Not? 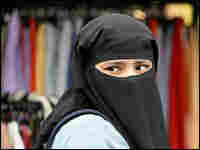 The decision of whether and how much to cover up can be a difficult one for Muslim women in America and other Western nations. John D. McHugh/AFP/Getty Images hide caption

Debates over when and how Muslim women are allowed to cover themselves have heated up in Europe in recent months. In the United States, a Muslim woman was ordered to remove her veil in a Detroit courtroom, igniting debate here as well. The decision to wear a veil is a complex one for many American Muslim women, because covering up means exposing their faith and their life choices.

Dearborn, Mich., has one of the of the largest communities of Muslims in the country. In the south end of Dearborn, many women wear the long, one piece, black abaya that covers the whole body, some with the face veil called the niqab that leaves only the eyes exposed. In other parts of the city, the population is more diverse, and some women don't cover at all. But most wear some version of the hijab, which is the headscarf that just covers the hair and shoulders.

Just outside of Dearborn, I spoke with a woman who decided to start wearing hijab just a few years ago. She goes by Joanne Fawaz at work, but to friends and family, she's Lubna, and she is a self-described clotheshorse. On a recent afternoon, she gave me a tour of her two-story house, starting in the closet, in the extra room where she keeps treasures from another life.

Relics of Another Life

"I used to have more dresses, but I gave them away. But these are a few that I kept," she says as she pulls out a sleeveless green satin dress and a black and red gown with sequins and capped sleeves. "This I kept it because my niece wanted it -- it's a Saks Fifth Avenue exclusive. And then there's this one that I never wore but it looks like a negligee, so I was just thinking about taking the tags off and wearing it to bed."

These are the kind of things Fawaz would have worn to dinner parties with a pair of black heels, two years ago. That's when she rediscovered her Islamic faith, and her life changed. Fawaz started praying daily, going to mosque more and wearing hijab. But she says that doesn't mean she has to fit into some Islamic stereotype.

Changed Dynamics with Others

The 37-year-old has been divorced for about eight years. Since then, she has developed a successful career as a pharmaceutical sales representative. She works long days and eats out a lot. After carefully re-pinning her lavender colored hijab, we hop in her SUV and drive a few blocks to the local Mexican restaurant, where she's a regular. Here Fawaz describes how her choice has changed her life in very practical ways.

"My first six months, seven months were extremely difficult," she says. "I couldn't keep it on my head, it would slip off. I wasn't very happy about it because it did really restrict me."

That meant no more sundresses and no more Pilates classes. But more significant was a change in the dynamic with some of her customers. Fawaz has a successful sales career that takes her outside the cultural bubble of Dearborn and surrounding areas, and into places where a woman walking around in hijab can trigger unwelcome stares. She recalls the reaction of one doctor in particular.

"You could tell by the way he would speak to me that he was very uncomfortable with it, and he felt sorry for me," she says. "People think you're less educated or less aware. They definitely think of you as less American."

And that's exactly why other women here have made a different choice.

'I See the Looks'

Denise Abdullah is a stay-at-home mother of two and a devout Muslim. She and Lubna Fawaz are old family friends who grew up together in Dearborn, but they've made different choices about wearing the hijab.

"I don't think it's convenient, and I have seen the way people look at women with hijab," Abdullah says. "When I'd be with people wearing hijab and I'm not, I see the looks."

At their house in the Springwells Park neighborhood of Dearborn, Abdullah describes how, even though she didn't grow up in a religious household, her own beliefs have strengthened through motherhood.

"Having faith in God has helped me throughout life so much that I want them to have it," she says. "If anything, I would like them to be faithful people."

But for this American-born Muslim, becoming religious does not mean looking the part. I asked Abdullah if she ever felt pressure to wear hijab. She says it was never overt, but pressure came in other ways.

Three years ago, Abdullah was diagnosed with breast cancer. The curly haired brunette recalls how, during chemotherapy, she lost all her hair. A Muslim friend tried to convince her that it was the perfect opportunity to start wearing hijab.

"I told her that I didn't want to be cornered into wearing the hijab. It just didn't feel right," she says. "Even now, I'll be sitting at an event, and I'll be the only woman uncovered. But I'm not going to cover just because they all are."

But at the same time, Abdullah says, because of the culture of Dearborn and the subtle but persistent pressure to wear hijab, she can't escape occasional twangs of shame and guilt because of her choice. "You know, it's embarrassing, but I just don't have the desire," she says.

Community Pressure to Cover Up

Other women say that embarrassment is caused by pressure from religious and community leaders.

Sandra Bryan is a psychologist at an organization called ACCESS, Dearborn's Arab-American community center. Sitting at a crowded Lebanese lunch joint, she says the message from many in this community is that if you don't wear hijab, you're not a good Muslim woman.

"I've sat through too many lectures from, frankly, too many religious leaders who have threatened and promised the most dire consequences to women if they don't adopt hijab," Bryan says.

Islamic scholars say there are specific verses in Koran that require women to cover their heads. But Bryan, though she chooses to wear a headscarf, says she reads no such thing in the Koran, and that hijab has become a kind of false Islamic credential.

Lubna Fawaz disagrees. For her, the hijab is a symbol of a new, deeper connection with God, and her identity as a Muslim woman. Fawaz says when she told her mom and sister about her decision to start wearing hijab, they were shocked, and they weren't convinced she was ready.

"They were like, 'This is huge, and you have to understand that it's not a costume. You can't put it on and take it off,'" she recalls. "They wanted to make sure I was ready. And I was."

Covering this way can be a joy and a burden, and it's not for everyone. But Farwaz says wearing hijab is the most spiritually fulfilling when it's a conscious choice, and for her, it was the right one.