Accessibility links
Shrinkwrap, Zap or Blow Lice Out of Your Hair As resistance to traditional insecticides grows in head lice, some researchers are abandoning poison shampoos and taking a different approach, from electrocution and suffocation to a lotion that acts as a shrinkwrap.

Listen
Shrinkwrap, Zap or Blow Lice Out of Your Hair 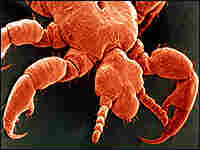 For centuries now, pets, dirty kids and dirty houses have been blamed for spreading head lice. Harvard lice expert Richard Pollack sets the record straight. Scroll down for that story. 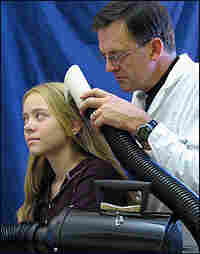 As resistance to traditional insecticides grows in head lice, some researchers are abandoning poison shampoos and taking a different approach. Their goal is a physical, mechanical way of killing the parasites, like hammering a stake through the heart of these little vampires.

One idea is to dry lice out, sucking out their moisture until they become harmless little husks.

Dale Clayton at the University of Utah, who normally studies bird lice, has been working on this method. His interest in the reaction of lice to humidity was piqued when he first moved to Utah and found it was hard to keep his lab lice alive in the arid environment.

"I actually took bird lice and sprinkled them in my hair," Clayton says, explaining that bird lice won't latch on to humans. Then, he sat under a bonnet-style hair dryer and watched television. After about 20 minutes, he combed the lice out of his hair to see if they were still alive.

They were. So then Clayton tried a hand-held hair dryer, but that didn't work either. Eventually, he developed a hot-air blower the size of a small vacuum cleaner, which he calls the LouseBuster. It has a hose and a nozzle with teeth like a rake. It's not as hot as a normal hair dryer, but has a powerful blower.

"Our machine runs at twice the volume of a blow dryer," he says. "And importantly, you also need to lift the hair, exposing the roots, where the eggs and the lice tend to hang out."

Clayton recently published a study in the journal Pediatrics showing that a child with two feet of hair could be treated by the device in less than an hour, although raking a comb through the hair while hot air is blowing in the opposite direction makes for a bad hair day.

"(The hair) does get tangled to some extent, and this is the price one pays for this method," Clayton says.

Actually, the real price is likely to be hundreds of dollars. Clayton's team plans to seek approval from the Food and Drug Administration, and he ultimately wants to sell the gadget to schools or clinics instead of parents.

Another invention -- one that parents can buy now -- is a comb with a bug zapper built into the teeth. As the comb comes across a louse, the zapper's whining sound stops briefly as the teeth electrocute a louse. That's satisfying -- but experts say the device can go silent when it hits other stuff, like dirt or moisture.

"You often get a lot of false positive noises, which makes some people feel happy, because they're not aware of what's going on," says Ian Burgess, head of a research organization in England called the Medical Entomology Centre. He's studied electric combs, but is more impressed with another way to kill lice -- a slippery lotion made with silicone that coats the bugs.

"Effectively, it acts like shrink-wrapping," Burgess says. The lotion seems to upset a louse's ability to evaporate water from its body, causing the gut to rupture and killing it. The product, called Hedrin, is on the market in Europe and may soon be available in the United States.

Shrink-wrapping would seem to offer the advantage of also killing a louse by suffocation, but Burgess says the bugs have tricks that make them extremely hard to asphyxiate.

"If you immerse a louse in water, then it shuts down its breathing system," he says. "So drowning or asphyxiation is not really a viable option." Once a louse closes its breathing holes, it can sit pretty for hours and hours.

But the suffocation approach is attractive enough that people keep trying. Mike Precopio of Summers Laboratories in Pennsylvania has developed a new formulation containing a special alcohol.

"It isn't a pesticide, but it sort of anesthetizes the lice," Precopio says, explaining that stunned lice don't shut their breathing holes down.

"And so while their breathing apparatus is open, it really doesn't take that much to coat the lice and cause asphyxiation."

His company calls this product the Lice Choker. They're doing a clinical trial now, and they hope to apply for FDA approval sometime next year.

Head lice and humans go way back; the parasites have been found with their little claws locked around prehistoric mummy hair. And our eons-long relationship has given us plenty of time to build up myths about lice, too. Here, Harvard lice expert Richard Pollack dispels some of the most persistent folklore:

Dirty Kids Spread Lice: Head lice have no preference for dirty hair or clean hair. "If you wash your hair three times a day or more, the lice on your head will just be clean lice," Pollack says.

Pets Spread Lice: Human head-lice infestations don't come from pets -- our lice only like our blood.

Brushes Spread Lice: Combs, brushes, headphones, hats and helmets have very little role in spreading lice. It's all the tumbling, playing and hugging that does it. In the vast majority of cases, lice are spread by direct head-to-head contact.

Clean House to Get Rid of Lice: If your house is dusty or dirty, go ahead and clean, says Pollack. But that won't prevent or cure a lice infestation. The parasites can't survive for more than a day without a meal of human blood, and they generally aren't going to let go of your hair to hang out on your couch. Changing bed linens or vacuuming a car seat can only help, but chances of a louse being on a bed or a car seat are incredibly small.

Shave Heads: "It's like using a cannon to kill a housefly," Pollack says. Completely shaving a head will get rid of lice eggs, but Pollack says that's a needless tactic when there are so many other effective and less drastic ways to solve the problem.

Head Lice Can Kill: Nope, that would be body lice. Those parasites do thrive in dirty environments and are perhaps most infamous for spreading deadly typhus in the 19th century. Head lice just make you itch.

Coat Your Head in Vaseline: Some people swear by the Vaseline or olive-oil treatments -- the idea is to suffocate the lice. But lice are extremely hard to suffocate, and to date, no studies have evaluated the efficacy of either substance. "Why not chose something that's been tested and shown to work?" Pollack says.

Insecticide Shampoos Can Be Toxic: "The only ones who should fear the proper use of these products are lice," says Pollack. Look for FDA-registered over-the-counter treatments containing pyrethrin, which is a natural chrysanthemum abstract, or permethrin, which is the synthetic form. If your lice appear to be resistant to those, the next step is a prescription shampoo containing either malathion or lindane. "When used properly, they are valuable and low-risk pesticides," Pollack says.

Manual Removal Is Safest: If you have short, straight hair, a special comb on its own could take care of an infestation. "If my daughter, who has thick, shoulder-length hair, had head lice, and I tried to use any of these devices on her, the neighbors would call the cops, it would cause so much discomfort and pain."

Editor's Note: Pollack has served as a paid scientific advisor in the past to companies that manufacture head lice shampoos.