Accessibility links
High Court Hears Its First Global Warming Case The U.S. Supreme Court addresses the question of global warming for the first time, in a case in which states are asking the Environmental Protection Agency to regulate greenhouse gases in vehicles and power plants. At issue is whether the Bush administration can refuse to regulate carbon emissions. 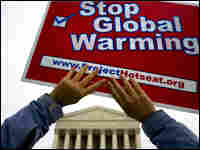 An environmental activist lifts a sign outside the Supreme Court, where a case brought by 12 states and 13 environmental groups was being heard. Brendan Smialowski/Getty Images hide caption

The U.S. Supreme Court tackled the question of global warming for the first time Wednesday. At issue is whether the Bush administration can refuse to regulate carbon emissions when the Clean Air Act specifically mandates regulations of all pollutants that may endanger public health or welfare, including effects on climate and weather.

As a presidential candidate in 2000, George Bush pledged to regulate carbon emissions. But once elected, he did an about-face and rejected the recommendations of even his own EPA administrator.

Now 12 states and a coalition of environmental and public health groups have gone to court contending that they are being harmed by the EPA's failure to act. Wednesday, on the steps of the Supreme Court, Massachusetts Attorney General Tom Reilly said that his state and others are rapidly losing shoreline and gaining smog because of unchecked global warming.

"It's unfortunate that the Commonwealth of Massachusetts and the other states that petitioned the United States Supreme Court had to be here today to force the EPA and the administration to do their job," Reilly added.

But Ted Olson, who represents the alliance of automobile manufacturers, said the Bush administration was right not to act.

"The agency is essentially saying, 'We are not going to do ready, fire, aim,'" Olson said. "If it had the authority, it's saying we need to know what we're looking at, what we're aiming for, and what kind of solution will deal with the problem. And we don't know enough to do that now."

Inside the courtroom, the focus was on whether the states, or anyone else for that matter, can get in the courtroom door to challenge the Bush administration's decision not to act. A tag team of conservative justices skewered Massachusetts Assistant Attorney General James Milkey with a rat-a-tat series of questions.

Justice Antonin Scalia: "Don't you have to show imminent harm? When is the predicted cataclysm?"

Milkey: "The harm is already occurring... it plays out continuously over time. Once greenhouse gases are emitted, the laws of physics take over. So our harm is imminent in the sense that lighting a fuse on a bomb is imminent harm."

Scalia pointed to the fact that this case involves a challenge to the EPA's failure to regulate carbon emissions from automobiles. Only 6 percent of global warming emissions come from cars in the United States. Justice Alito followed up, suggesting that regulating that 6 percent wouldn't amount to much.

Milkey: "Another 20 percent of carbon emissions come from power plants, and we have another case on that awaiting the outcome of this case. Moreover, ANY reduction in carbon emissions would mean we would lose less coastline."

Chief Justice John Roberts: "Not necessarily. It would depend on what China and other economically developing countries do."

Milkey: "No matter what other countries do, reducing U.S. emissions would reduce the harm we would otherwise suffer. I want to emphasize that the dramatic rise in ocean levels means that New York could lose thousands of acres of its sovereign territory by the year 2020."

Representing the Bush administration, Deputy Solicitor General Greg Garre got a pounding from a different tag team of justices.

Justice John Paul Stevens observed that the administration, by contending that there wasn't enough evidence on what causes global warming, had selectively edited quotes from the a key government scientific report. The scientists who worked on that report, he noted, have filed a brief indicating there is far more certainty than the administration claims.

Justice David Souter took on the question of whether the states have shown enough injury to go to court. "They don't have to show regulations would stop global warming altogether," he said. "Their point is that it would reduce the degree of global warming and there will be some reduction in the damage to their states. Isn't that fair?"

"No, I don't think it's fair," Garre answered. "This is an extraordinarily complex area of science."

Justice Stephen Breyer jumped in: "Well, suppose it's not greenhouse gases. Suppose it's Agent Orange. And I say, 'You know, I think that Agent Orange being sprayed from a car is going to kill me with cancer,' and the reply is, 'We have some scientists who say your chance of dying is only 1 in 30 or 1 in 1,000. And therefore, you have no right to go to court to make the EPA regulate this pollutant.'"

Garre replied, "That is fundamentally different because climate change is a global phenomenon."

Earlier in today's argument, there was a supremely candid moment when Justice Scalia was questioning the Massachusetts Assistant Attorney General Milkey.

Scalia pointed to the government's assertion that carbon dioxide is not a pollutant. "But," said Scalia, "You say it is, once it goes up into the stratosphere and contributes to global warming."

"Respectfully, your honor," Milkey answered, "It is not the stratosphere. It's the troposphere, from the ground up to nine miles above."

"Whatever," replied Scalia. "I'm not a scientist. That's why I don't want to have to deal with global warming, to tell you the truth."

On that question -- whether the courts should be involved at all -- the Supreme Court seemed closely divided, with Justice Anthony Kennedy the likely swing vote.