Accessibility links
Bush, Maliki Meeting Put Off in Wake of Memo The White House says a day-long delay in a planned meeting between President Bush and Iraqi Prime Minister Nouri al-Maliki has nothing to do with a newly leaked White House memo questioning whether Maliki can control violence in Iraq. The session has been postponed until Thursday. Michele Norris talks with NPR's David Greene.

Listen
Bush, Maliki Meeting Put Off in Wake of Memo

The White House says a day-long delay in a planned meeting between President Bush and Iraqi Prime Minister Nouri al-Maliki has nothing to do with a newly leaked White House memo questioning whether Maliki can control violence in Iraq. The session has been postponed until Thursday. Michele Norris talks with NPR's David Greene.

President Bush has arrived in Jordan's capital, Amman, for a much-anticipated meeting with Iraq's Prime Minister Nouri al-Maliki. The two men were originally scheduled to hold a first round of talks tonight but that meeting was abruptly cancelled. Instead, the president conferred with Jordan's King Abdullah.

NPR's David Greene joins us now from Amman and David, President Bush and Prime Minister al-Maliki both now in Amman. Has the White House explained why they called off tonight's meeting?

DAVID GREENE: Well, Michele, here's what the White House said. Prime Minister al-Maliki got to Amman earlier today and had a meeting with King Abdullah of Jordan and when President Bush arrived, he was supposed to go meet with both Maliki and the king, but the White House says the Iraqis and Jordanians decided they didn't need to have the meeting with the president. So Mr. Bush, as he was flying on Air Force One, got a call from the U.S. Ambassador to Iraq telling him the meeting was off. So when the president got to Amman, he only met with King Abdullah of Jordan and we're told they talked about a range of Middle East issues.

Now White House officials said not to read anything into this change in schedule but it does come just after a classified memo from the White House surfaced that was actually very critical of al-Maliki's government and it questioned his leadership. So it's a bit difficult not to read a bit more into why al-Maliki and the president did not meet tonight.

NORRIS: We'll get back to that memo in just a minute but this White House is known for carefully planning meetings, sticking to a schedule. It seems that this is a bit unusual.

GREENE: Oh, yeah. This is very unusual. When the White House announced this summit last week they said Mr. Bush and al-Maliki would be holding meetings over two days, today and tomorrow. And there's been so much anticipation. A major television network in the U.S. sent their anchors here to give big coverage to the meetings. Now Mr. Bush and al-Maliki are still scheduled to meet tomorrow and talk to reporters afterwards.

There were some reports here in Amman that al-Maliki backed out of the meeting with Mr. Bush because he didn't want to talk about broader regional issues like the Israeli-Palestinian tensions and he thought that would come up in a three-way meeting. In addition, al-Maliki was under enormous pressure back at home not to meet with the president at all. Politicians loyal to the very powerful Shiite cleric Moqtada al-Sadr were threatening to boycott taking part in government activities in Baghdad to protest the meeting.

So the White House insists this was not a snub and they say they've been assured al-Maliki was not offended by this White House memo that criticizes al-Maliki, but there are some questions here.

NORRIS: David, back to that memo you mentioned criticizing al-Maliki. Can you tell us a little bit more about who wrote it and also the White House response to that leak?

GREENE: Sure. It was written by the president's own National Security Advisor Stephen Hadley a few weeks ago after he returned from a trip to Baghdad. White House officials say the document is mostly encouraging of al-Maliki and talks about how the U.S. can help him become more able to secure his country but there's some pretty stunning criticisms of al-Maliki.

Hadley wrote that it's possible al-Maliki is ignorant of what's taking place in his country. It questions his intentions. It suggests al-Maliki or at least people loyal to him are trying to concentrate Shiite power in the government at the expense of Sunnis. Hadley even mentions the possibility al-Maliki's government is encouraging military attacks on Sunni targets and trying to stop military attacks when the targets involved Shiite targets.

NORRIS: Given that assessment, has there been some tension between President Bush and the prime minister?

GREENE: There's certainly been some, especially in recent months. Al-Maliki seemed upset when President Bush first started talking about setting timetables some months ago. Timetables on al-Maliki's government to reach certain goals. Al-Maliki also expressed frustration some time back that there were military attacks carried out in Baghdad without him being informed.

While the White House says Mr. Bush is still confident in Maliki going into these meetings, this memo suggests that there are some serious doubts. Of course, we don't know where this memo came from. It showed up in the New York Times. It was evidently leaked but we don't know why and we don't know what the motives may have been.

NORRIS: And just quickly, we noted that the president did confer with Jordan's king. Anything come out of that meeting?

GREENE: Well what the White House is saying is that the king is very eager for the president to be more involved in solving the Israeli-Palestinian crisis and Secretary of State Condoleezza Rice is going to be traveling from here to meet with Israeli and Palestinian officials during the day tomorrow.

NORRIS: That was NPR's David Greene, speaking to us from Amman. 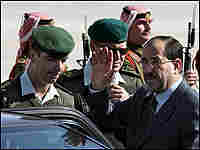 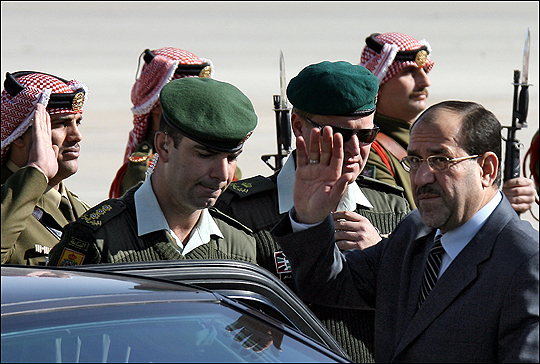 In advance of a much-anticipated summit between President Bush and Iraqi Prime Minister Nouri al-Maliki in Jordan, a leaked White House memo threatens to disrupt the meeting.

The memo, written by national security adviser Stephen Hadley and sent to President Bush, offers a candid and critical assessment of Iraq's embattled leader. Now it appears that publication of the classified memo's contents by The New York Times may have prompted the cancellation of the first of a pair of formal meetings the president was to hold with Maliki in the capital city of Amman.

Mr. Bush arrived in Jordan Wednesday evening, local time. He was to sit down with the Iraqi Prime Minister and the Jordanian King shortly thereafter. Instead came an announcement that the session would proceed without Maliki.

The White House denies it was a snub, saying that because the Prime Minister had met with Abdullah prior to Mr. Bush's arrival, that it made the multi-lateral session unncecessary.

"It negated the purpose for a meeting of the three of them," top White House aide Dan Bartlett said.

Did the memo have an impact on that decision? "Absolutely not," Bartlett said.

The Hadley memo to President Bush is dated Nov. 8, the week following Hadley's fact-finding trip to Iraq. In it the national security advisor bluntly notes that he has doubts about Maliki's abilities to lead his country.

Despite Maliki's reassuring words, repeated reports from our commanders on the ground contributed to our concerns about Maliki's government. Reports of nondelivery of services to Sunni areas, intervention by the prime minister's office to stop military action against Shia targets and to encourage them against Sunni ones, removal of Iraq's most effective commanders on a sectarian basis and efforts to ensure Shia majorities in all ministries -- when combined with the escalation of Jaish al-Mahdi's (JAM) [the Arabic name for the Mahdi Army] killings -- all suggest a campaign to consolidate Shia power in Baghdad.

Malaki is a Shiite and a member of Iraq's Islamic Dawa Party. Hadley goes on to write that it's not clear if the prime minister is a "witting participant" in an aggressive push by leaders of Iraq's Shiite majority population to consolidate their own power and influence.

"While there does seem to be an aggressive push to consolidate Shia power and influence, it is less clear whether Maliki is a witting participant. The information he receives is undoubtedly skewed by his small circle of Dawa advisers, coloring his actions and interpretation of reality. His intentions seem good when he talks with Americans, and sensitive reporting suggests he is trying to stand up to the Shia hierarchy and force positive change. But the reality on the streets of Baghdad suggests Maliki is either ignorant of what is going on, misrepresenting his intentions, or that his capabilities are not yet sufficient to turn his good intentions into action."

The memo offers a rare glimpse into the kind of discussions about Iraq that are taking place within a very secretive White House. It also seems to directly contradict the White House's frequent professions of support for Maliki, and the confidence the president has expressed in the Iraqi prime minister. Hadley's views, expressed in confidence and now public, make what had already promised to be a difficult session with Maliki even more so.

The White House has acknowledged that it is not pleased with the level progress the Iraqi government has made in boosting its ability quell the worsening violence that ravages Baghdad and other parts of the country 3 1/2 years after the fall of Saddam Hussein. According to the White House the goal of this meeting in Jordan is to listen to Prime Minister Maliki and to see what he needs to accomplish his goals.

At a news conference in Tallinn, Estonia, two days before heading to Jordan, President Bush said he had some questions he wants to ask Maliki: "What do we need to do to succeed? What is your strategy in dealing with the sectarian violence? I will assure him that we will continue to pursue al-Qaida to make sure that they establish a safe haven in Iraq."

The leaked memo immediately put the White House into quick-response mode in Riga, Latvia, where the president attended a two-day summit of NATO member nations in advance of the trip to Jordan.

Moments later, a pair senior administration officials, speaking only on the condition of anonymity, downplayed the contents of the Hadley memo. One of these officials argued that the revelations contained in the memo would now require the president to convince the Iraqi leader that the U.S. holds him in high regard.

"The president's conversations on a regular basis with Prime Minister Maliki I think have not only provided the personal relationship that is very important in this case, but also the ability of both men to talk candidly about the challenges that the Maliki government faces," the official said.