Accessibility links
Moms and Pros Tackle Lice Head lice are one of the top reasons that kids miss school, yet there's no single, foolproof remedy. Many parents, and now professional salons, find themselves searching for louse eggs and removing them by hand. These nits are a nuisance, but no reason for kids to stay home, say leading medical experts. 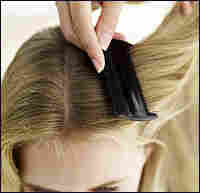 Many parents, and now professional salons, still find themselves searching for louse eggs and removing them by hand. Corbis hide caption 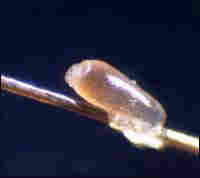 As resistance to traditional insecticides grows in head lice, some researchers are abandoning poison shampoos and taking a different approach, from electrocution and suffocation to a lotion that acts as a shrinkwrap.

Head lice is one of the top reasons children miss school, yet there's no single, foolproof remedy.

One of the most time-honored approaches is nitpicking. This involves picking lice eggs, known as nits, out of hair.

Robin Meigher of Potomac, Md., became a nitpicker after her 8-year-old daughter, Natalie, was sent home from school with head lice. She just never imagined that she'd still be picking a year later.

"They like to hang out close to the hairline," Meigher says of the nits as she searches through Natalie's hair using a pet comb with long metal teeth.

When she spots one, she isolates the strand of hair. The tiny egg is no bigger than the tip of a ballpoint pen, and it's cemented to the hair with a natural glue-like substance made by the mother louse.

"You can feel this little bump on the hair, and it doesn't come off easily at all," says Meigher. To remove the egg, she yanks out the strand of hair.

Meigher hopes her diligent work will pay off. The goal is to keep Natalie in school. She's been sent home five times since her initial head-lice outbreak last year. School administrators enforce a "no nit" policy in an effort to contain the spread of head lice, yet there's little evidence to suggest that the policy is effective. Nationwide, it's estimated that 12 million to 24 million school days are lost annually.

During the initial outbreak, parents are encouraged to use over-the-counter head lice shampoos. Studies show these work well to kill off the live bugs, yet recent research has found that the bugs may have become resistant to the medicated shampoos.

Lice expert Richard Pollack of the Harvard School of Public Health says there's no real trick to prevention, short of isolating a child.

"The more social your child is, the more friends he or she may have. If there's lots of head-touching, rug wrestling, these sorts of things, the more likely they may encounter head louse," Pollack says.

This is why elementary school children seem to pass it around. Lice are blood-sucking parasites that live only on the hair of people, explains Pollack. They spread through direct head-to-head contact.

"The commonly held belief, which is folklore, is that lice are shared through things like combs and brushes and hats and helmets," Pollack says.

Some authorities believe these personal items can help transmit head lice from one person to another. But Pollack explains the bugs cannot fly or jump. And studies show that once the lice are off the scalp, they die within hours.

Since head lice don't transmit disease, Pollack views them as a nuisance. Usually, the only symptom is an itchy scalp. Pollack argues that school administrators should abandon their "no-nits" policy, and the nation's leading pediatric groups agrees.

In 2002, the American Academy of Pediatrics revised its head-lice position, stating that no healthy child should be excluded from or allowed to miss school because of head lice, and that "no nit" policies for return to school should be discouraged.

For moms who are too grossed out or busy to pick nits, there's a new option. Franchises of professional nit-picking salons are popping up around the country.

Maria Botham runs the Los Angeles-based Hair Fairies. She says there's still a social stigma attached to lice. Many people mistakenly believe that the bugs are related to hygiene.

"Most clients who come in are just devastated," says Botham.

Using shampoos, creams, and nitpicking, the Hair Fairies salon can usually knock out an infestation in three hourlong sessions.

"It's a manual, labor-intensive process," says Botham, so to keep the kids distracted, the Hair Fairies salon offers Gameboys, DVDs and toys. The treatment costs $75 an hour and comes with a 14-day guarantee.

And since it's hard for kids to stop putting their heads together, the Hair Fairies have a lot of repeat customers.

Head lice and humans go way back; the parasites have been found with their little claws locked around prehistoric mummy hair. And our eons-long relationship has given us plenty of time to build up myths about lice, too. Here, Harvard lice expert Richard Pollack dispels some of the most persistent folklore:

Dirty Kids Spread Lice: Head lice have no preference for dirty hair or clean hair. "If you wash your hair three times a day or more, the lice on your head will just be clean lice," Pollack says.

Pets Spread Lice: Human head-lice infestations don't come from pets -- our lice only like our blood.

Brushes Spread Lice: Combs, brushes, headphones, hats and helmets have very little role in spreading lice. It's all the tumbling, playing and hugging that does it. In the vast majority of cases, lice are spread by direct head-to-head contact.

Clean House to Get Rid of Lice: If your house is dusty or dirty, go ahead and clean, says Pollack. But that won't prevent or cure a lice infestation. The parasites can't survive for more than a day without a meal of human blood, and they generally aren't going to let go of your hair to hang out on your couch. Changing bed linens or vacuuming a car seat can only help, but chances of a louse being on a bed or a car seat are incredibly small.

Shave Heads: "It's like using a cannon to kill a housefly," Pollack says. Completely shaving a head will get rid of lice eggs, but Pollack says that's a needless tactic when there are so many other effective and less drastic ways to solve the problem.

Head Lice Can Kill: Nope, that would be body lice. Those parasites do thrive in dirty environments and are perhaps most infamous for spreading deadly typhus in the 19th century. Head lice just make you itch.

Coat Your Head in Vaseline: Some people swear by the Vaseline or olive-oil treatments -- the idea is to suffocate the lice. But lice are extremely hard to suffocate, and to date, no studies have evaluated the efficacy of either substance. "Why not chose something that's been tested and shown to work?" Pollack says.

Insecticide Shampoos Can Be Toxic: "The only ones who should fear the proper use of these products are lice," says Pollack. Look for FDA-registered over-the-counter treatments containing pyrethrin, which is a natural chrysanthemum abstract, or permethrin, which is the synthetic form. If your lice appear to be resistant to those, the next step is a prescription shampoo containing either malathion or lindane. "When used properly, they are valuable and low-risk pesticides," Pollack says.

Manual Removal Is Safest: If you have short, straight hair, a special comb on its own could take care of an infestation. "If my daughter, who has thick, shoulder-length hair, had head lice, and I tried to use any of these devices on her, the neighbors would call the cops, it would cause so much discomfort and pain."

Editor's Note: Pollack has served as a paid scientific advisor in the past to companies that manufacture head lice shampoos.