Accessibility links
Report: Iraq Study Group Supports Withdrawal Details of the Iraq Study Group's final report have been leaked to The New York Times. The report does not advocate a firm timetable for withdrawal, but does call for phased pullback of American troops now in Iraq.

Details of the Iraq Study Group's final report have been leaked to The New York Times. The report does not advocate a firm timetable for withdrawal, but does call for phased pullback of American troops now in Iraq. 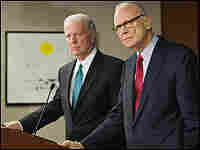 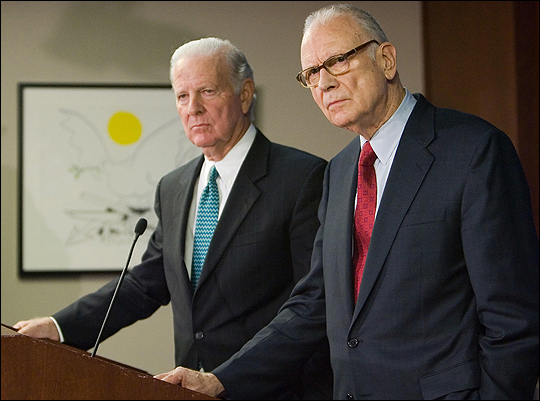 Details of the Iraq Study Group's upcoming report are beginning to show up in the media. They point to a compromise recommendation calling for a gradual drawdown of U.S. troops from Iraq -- with no specific timetable.

Escalating violence in Iraq and the midterm election results have helped to focus more attention on the group of five Democrats and five Republicans, charged with reviewing U.S. policy in Iraq.

The bipartisan panel was formed last April by four Washington think tanks and funded with $1 million from Congress.

Jackie Northam, NPR's national security correspondent, says the big questions the panel had to address were how and when U.S. troops would be withdrawn from Iraq.

Michael Vickers, a defense analyst with the Center for Strategic and Budgetary Assessments, tells Northam that reducing combat troops would represent a fundamental shift in strategy.

"It would be a transition to an Iraqi-centric approach to security, with Americans in support rather than an American-centric approach in the primary combat role," Vickers says. "So the overall force may only be reduced by half, but the orientation of the force, more as advisors and trainers accompanying Iraqis on the front lines would be a major shift in orientation."

Northam says the Iraq Study Group will reportedly not specify where the U.S. combat forces would be shifted -- whether back home, to a nearby country or elsewhere in Iraq. Pentagon officials have already starting planning to move several thousand more troops into Baghdad. Retired Army Maj. Gen. Robert Scales says this is a smart move militarily.

"The main thing in this war is security inside the city limits of Baghdad," Scales says. "Whoever owns the security situation in Baghdad at the end of the day, is the one who is going to own the political situation there."

Scales says the Iraq Study Group also appears to be suggesting something he and others have recommended for years -- moving the mission from a close combat operation to more of a support and training function.

"These types of insurgencies, religious and tribal in nature, tend to burn themselves out. The purpose of the American presence now is to lessen the bloodletting and to put Iraqi boots on the ground so they can pick up this mission," Scales says.

The co-chairmen of the Iraq Study Group are former Secretary of State James Baker III, a Republican, and former Indiana Rep. Lee Hamilton, a Democrat. Hamilton says the panel will release its final report on Dec. 6.

Anthony Cordesman of the Center for Strategic and International Studies says both men understand the complexity of the situation in Iraq and are trying to tamp down expectations for the report.

"The political dynamics often inside the U.S. are to find some simple solution, some silver bullet," Cordesman says. "Choose that as an alternative to what you're doing now and somehow it's going to solve everything. Well, as Secretary Baker and Congressman Hamilton have said, there are no silver bullets. And this is the only message they've very clearly given to date."

President Bush has said he is willing to listen to any ideas for Iraq. In addition to the Iraq Study Group, he will soon be receiving reports from his own staff, the Pentagon and the National Security Agency.