Accessibility links
Litvinenko Inquiry Centers on 12 Sites, 5 Airplanes British police investigating former Russian spy Alexander Litvinenko's death in London say they have found traces of radioactivity at 12 sites in the city -- and in five aircraft, as well. Litvinenko's apparent murder has become a story with very broad implications. Now doctors believe a former Russian prime minister may have been poisoned, as well. 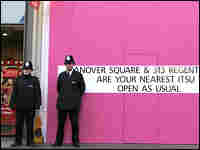 British police officers stand outside of a boarded-up Itsu restaurant in London. Detectives are continuing to examine five locations in London where traces of polonium-210 were found. Scott Barbour/Getty Images hide caption

British police investigating former Russian spy Alexander Litvinenko's death in London say they have found traces of radioactivity at 12 sites in the city -- and in five aircraft, as well. The Kremlin has consistently denied any involvement in the death of Litvinenko, who blamed President Vladimir Putin for his death.

The apparent murder of Litvinenko has unfolded into a story with very broad implications, even involving public health. And in Russia, doctors believe a former Russian prime minister may have been poisoned as well.

In Parliament, Britain's Home Secretary John Reid linked the contamination in London to polonium-210, the radioactive element found in Litvinenko's body. He said that about 24 sites were being investigated, and 12 of them had shown traces of radioactivity.

"It is at very low levels in some cases, at higher levels in others, though none of them, we think, is a health hazard of any significance," Reid said.

The investigation also includes five aircraft, two of which have been confirmed to be contaminated.

Some 30,000 people have flown on those two aircraft alone since police believe they became contaminated a month ago. Police are focusing on four flights between London and Moscow from the end of October into early November, but the aircraft used on those flights have taken at least 200 other flights, carrying thousands more passengers since then.

Hotlines have been set up for people to call if they're concerned that they've been in contact with radiation. Britain's National Health Service says only people who are now feeling unwell should contact the hotline.

Meanwhile, the autopsy on the body of Litvinenko will begin Friday.

Alex Goldfarb, Litvinenko's friend and a fellow critic of President Vladimir Putin, said he believes the discovery of contamination on airplanes on the route between London and Moscow backs his claim of the Russian government's involvement in Litvinenko's death.

"The first flight they are interested in occurred five days before the poisoning," Goldfarb said, "and it is the Moscow-Heathrow flight on the 25th of October, which tells us that the police are looking, obviously, for the ways of delivery of this material to London."

In another development Thursday, doctors in Moscow said they believe former Russian Prime Minister Yegor Gaidar might have been poisoned while attending a conference in Ireland last week.

Gaidar is still hospitalized in Moscow. His daughter Maria says she believes her father was poisoned, but she doesn't think President Putin was involved.

The Kremlin has consistently denied any involvement in the death of Litvinenko. A spokesman said Thursday that President Putin himself had phoned Yegor Gaidar in the hospital, to wish him a speedy recovery.