Accessibility links
On World AIDS Day, Awareness, Testing a Priority Until a decade ago, HIV-infection rates were dropping in the United States. Experts discuss why that trend has reversed and what can be done. 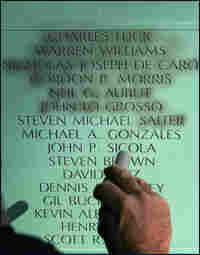 The names of new AIDS victims are being added to a memorial in Los Angeles in preparation for World AIDS Day. David McNew/Getty Images hide caption

Today is World AIDS Day, designated by the United Nations to raise awareness about the global AIDS epidemic. The latest estimates indicate that more than 39 million people in the world are now infected with HIV.

In the United States, more than 1 million people are living with the disease, and each year, more than 40,000 people in this country find out they are HIV positive. Until a decade ago, HIV-infection rates were dropping. Experts discuss why the rates are no longer dropping and what can be done.

Q&A: Fighting AIDS in the Other America

What It Takes to Stop AIDS

Health experts met in Washington, D.C. this week to discuss ways to improve HIV diagnosis, prevention and care. We asked several what they think the priorities should be in the effort to decrease the rate of HIV infection in the United States.

Increase Awareness, Dr. Kevin Fenton, Director of the Center for HIV, STD and TB Prevention at the Centers for Disease Control and Prevention

Twenty-five years into the AIDS epidemic, more than 50 percent of the 1 million Americans living with the disease are black.

Phil Wilson, an activist who has been living with HIV since the beginning of the epidemic, calls the disease the leading civil-rights issue for the black community today. The majority of new infections occurs in blacks, and nearly 70 percent of new AIDS cases among women are in black women.

"If we can't solve this issue, we have no chance of dealing with any of the host of racial social-justice issues that are confronting us," says Wilson, executive director of the Black AIDS Institute in Los Angeles.

Here, for World AIDS Day, he talks about why AIDS has taken such a hold on black America, and the mobilization under way to reduce infections.

Why is it in year 25 of HIV/AIDS that we still have 40,000 new infections in the United States every year?

We are not following the lessons we learned early on in the epidemic, and I fear that we are marching down a path to ignore them. The successes we had in moving infections from 165,000 a year down to 40,000 involved community mobilization and it involved comprehensive prevention. Over the last seven years, we have seen flat funding of HIV-prevention dollars, and we've seen a shift to prevention strategies that don't work-- for example, abstinence-only programs. And we have seen a total abdication of domestic epidemic efforts in favor of international efforts.

How do we stop the AIDS epidemic in America?

In 2006, AIDS in America is a black disease. As AIDS goes in black America, so goes the epidemic in America. And as the saying goes, the only ones that can save us from us is us.

Why are black communities now most at risk?

In the early '80s, when we targeted gay men (for prevention and treatment), when every institution in the gay community had to be involved in HIV, that's where we had the only real success around AIDS in this country. That turned out to be bad news for black folks, because that allowed black folks to believe that AIDS was a gay disease. And so AIDS had an opportunity to take hold in our communities.

What steps can be taken to reduce infections in the black community?

You have to start with getting this on the radar of black folks. I'm talking about a mobilization. AIDS is the new civil-rights issue for black Americans, and if we can' t solve this issue, we have no chance of dealing with any of the host of racial social-justice issues that are confronting us.

Is there a danger that by targeting prevention messages at the black community, you won't be able to mobilize the larger society to help?

People are fearful that when you say AIDS is a black disease, other people will feel they're off the hook and resources will start to dry up. But even if the government and other organizations don't respond to the epidemic, we have a responsibility to save ourselves. And so the only way for us to break through the stigma, to break through the lack of resources, is to at least make this a priority for ourselves.

Are you seeing that happen?

Our leaders are taking this issue on -- whether we're talking about the NAACP, the Urban League, the National Council of Negro Women or the Congressional Black Caucus. Across the board, institution after institution in black America is starting to embrace HIV and AIDS. Part of the tragedy of that is we're starting to embrace it because now every one of us knows someone, but nevertheless it is starting to happen. We're starting to see increases in black folks seeking HIV testing, we're starting to see different discourses in black America around HIV and AIDS. The next phase is to capitalize on that attention and get young people to think differently about their sexual behavior.

Is the message catching on in young people?

I've found that when we talk about race in America, there are still two Americas. And what is true for black America, is that unless we are explicitly included, we are explicitly excluded. I think that's particularly true for young people. Unless you speak to them directly, unless you say, "This is about you, this is about your life," as opposed to some generic life, you won't get their attention.

You've been involved with the epidemic as an activist since the beginning. It sounds like you don't feel as alone as you used to...

The only way you can live with HIV for as long as I've lived with it is to have faith. There have been times where I felt like Chicken Little, screaming and screaming the sky is falling, and it's been a very lonely experience, but I don't feel as lonely as I have in the past. I see a new day in fighting AIDS and it makes me hopeful.