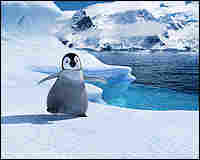 The penguins in Happy Feet have danced their way to the top of the box office. Warner Bros. Ent. hide caption