Accessibility links
Hezbollah Protests Target Lebanon's Government In Beirut, hundreds of thousands of Hezbollah supporters are demonstrating against the nation's government. They vow to stay in the streets around Martyrs' Square until the government falls. 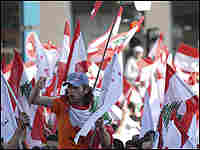 Hundreds of thousands of demonstrators gathered in the streets in front of the Serail, the Prime Minister's offices, on Friday in downtown Beirut, Lebanon. Mustafa Khalili/Getty Images hide caption 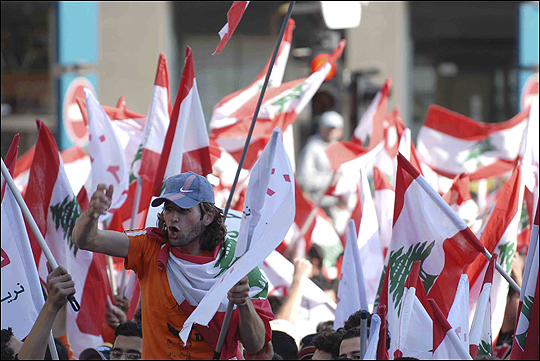 Hundreds of thousands of demonstrators gathered in the streets in front of the Serail, the Prime Minister's offices, on Friday in downtown Beirut, Lebanon.

Hundreds of thousands of protesters gathered in Beirut's Martyr's Square Friday. They were there in support of Hezbollah, the Shiite party that fought the Israelis over the summer, and the party's pro-Syrian allies. The crowd demanded the resignation of Lebanese Prime Minister Fuad Saniora, whose government is backed by Western powers, including the United States. Last week a pro-government demonstration took place in Beirut, a show of mourning for a slain cabinet minister.

NPR's Peter Kenyon, reporting from Martyr's Square, said the crowd was enormous, and that one difference between this week's protest and last week's was the number of young men praying.

Hezbollah is a religious party led by the charismatic Hassan Nasrallah. The party gained significant standing following the month long war this summer, and is demanding that the current government step down and has vowed to continue the protests until the Prime Minister does so.

Kenyon said the star of today's event was General Michel Aoun, a Christian leader who has allied himself with Hezbollah and other pro-Syrian forces. His presence is just one sign of the incredibly complex political situation in Lebanon. Other Christian parties are in the current government, as are Sunnis. There is some fear that the current tension may break out into another civil war.

For 15 years, numerous factions battled throughout the country, and now the peace seems tenuous. Just last week another Christian leader and member of the government was gunned down. There is also an ongoing, though halting, investigation of the killing of former Prime Minister Rafik Hariri two years ago. That assassination, and the protests that followed, led to the withdrawal of Syrian forces from the country after years of occupying parts of Lebanon and controlling its politics. It also swept the current government into power.

Kenyon did say Friday that the protests have been peaceful so far, and there is a hope that the memory of the bloody civil war will keep them that way. Kenyon also said that Lebanese feel that at some level they are being used as pawns in a broader conflict with Syria and Iran backing Hezbollah, and the West the current government.