Accessibility links
Wondering About Water Towers This week, our Science Out of the Box series admires the beauty — and the practicality — of New York City's water towers. 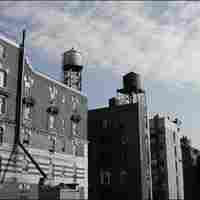 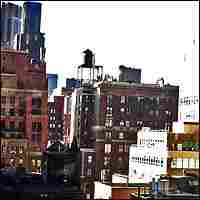 From her chiropractor's office, Gail Dedrick saw wooden tanks illuminated by the sun: "I ran over to my bag, took out my camera and snuck a photo before he came in." Gail Dedrick hide caption

Last weekend, our Science out of the Box series took a tour of a city intersection. And we invited listeners to post their photos of the manmade world to an account we set up on the website Flickr.

We got more than 200 photos — including several from Gail Dedrick. In 1990, she moved from upstate New York to Manhattan. Like many people new to the Big Apple, she looked up. And she was surprised to see rickety, shingled water towers on the roofs of many buildings.

Like Monet with his haystacks, Dedrick started obsessively documenting the towers: "They just seemed so incongruous sitting on top of buildings. They kind of look like Petticoat Junction. They're just beautiful."

Looking at the photos on Flickr made her realize that there's a secret society in New York City: "people who just love water towers."

On behalf of Manhattan's water tower enthusiasts, we want to know: How do they work? We put the question to Brian Hayes, our expert on the industriosphere and the author of Infrastructure: A Field Guide to the Industrial Landscape.

"New York bedrock doesn't let water travel naturally above six stories," he explained. Until the advent of modern plumbing, water towers were needed to build pressure in the pipes. Even today, he adds, "some say that no one has figured out how to make a water tank that works better" than the old ones from the 1920s.