Accessibility links
Trip to Religious School Offers Window on Pakistan A visit to the Akora Khattak madrassa, perhaps the most famous of Pakistan's religious schools, offers a glimpse into fundamentalist Islam in Pakistan. It's where many of the Taliban's leaders studied. Today's students remain deeply conservative and full of anti-American sentiment. 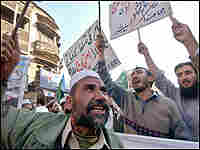 Pakistani Islamist activists carry placards and chant slogans during a protest rally in Peshawar Friday. The were protesting an army operation in the Bajaur tribal area, where an airstrike on a Islamic religious school left some 80 people dead. The Pakistani goverment said the madrassa served as a training camp for militants linked to al-Qaida. Tariq Mahmood/AFP/Getty Images hide caption 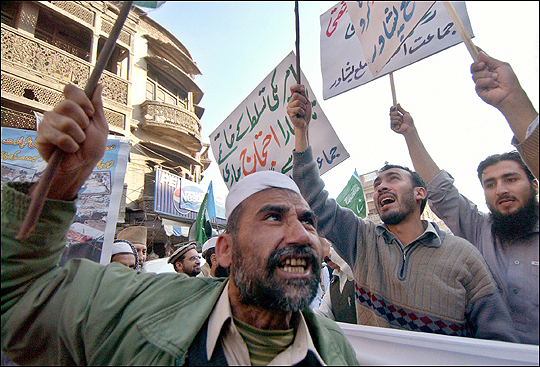 Pakistani Islamist activists carry placards and chant slogans during a protest rally in Peshawar Friday. The were protesting an army operation in the Bajaur tribal area, where an airstrike on a Islamic religious school left some 80 people dead. The Pakistani goverment said the madrassa served as a training camp for militants linked to al-Qaida.

Start unraveling the threads of many recent terrorist plots, and they continue to lead back to al-Qaida -- and to Pakistan.

The State Department says northwest Pakistan has been a "safe haven" for al-Qaida fighters for five years now. The head of MI-5, Britain's security service, recently made a similar pronouncement. Eliza Manningham-Buller said her officers have disrupted 30 terrorist plots in the past year -- plots that "often" link back to Pakistan.

Such charges infuriate Pakistani officials. They insist they're doing their utmost to fight terror. And they say top Taliban and al-Qaida leaders, such as Osama bin Laden, are almost certainly not in Pakistan.

If you want to experience fundamentalist Islam in Pakistan, walk into the Akora Khattak madrassa, on the road between Islamabad and Peshawar. This is perhaps the most famous of Pakistan's madrassas, or religious schools. It's where many of the Taliban's leaders studied.

Today's students -- all male, roughly 3,000 of them -- remain deeply conservative. With anti-American sentiment running high in Pakistan these days, it took the personal intervention of Pakistan's secretary of religious affairs to secure an appointment.

Nonetheless, there was flutter of consternation among officials when I arrived. "We thought you would be older," they told me. "Less of a distraction to the religious students here."

After some whispered consultations, they relented and agreed to show me around.

Rashid-ul-Haq showed off the library, then the computer room. His grandfather founded the madrassa 60 years ago. Today his father, Sami ul-Haq, runs the place. The Ul-Haqs live in a house on the grounds. There, over tea and fruit, Sami ul-Haq pointed out that teachers at the school offer math, social studies and English in addition to religious studies. He said the stereotype of madrassas such as this one spawning new terror recruits is misinformed. And he hotly denied recent reports of military training at his school.

But Ul-Haq did offer up some thoughts distinctly at odds with the U.S. world view. Suicide bombers, ul-Haq says, die honorably. And he argued that the U.S.-led invasion of Afghanistan was illegitimate because -- he claims -- the Sept. 11 attacks were not the work of al-Qaida.

"I doubt al-Qaida and Bin Laden were behind them," ul-Haq told me. "If they were, why have they done nothing in the five years since? No, this was a propaganda plan from the Bush administration -- to given them an excuse to attack Afghanistan, to attack Iraq, to attack Muslims."

This is not a minority view in Pakistan. Over two weeks -- and dozens of interviews -- I met only a handful of people who say they believe the U.S. account of what happened on Sept. 11. From taxi drivers to senior government officials, the far more common view is that Israeli or U.S. intelligence orchestrated the attacks.

Another conspiracy theory circulating is that the United States -- having invaded Iraq and Afghanistan -- might attack Pakistan next. As evidence, Pakistanis cite two recent strikes against alleged terrorists in Bajaur, a tribal area in the northwest.

The first, in a village called Damadola in January, killed 18; the second, at a madrassa just a few weeks ago, killed more than 80. In both cases, Pakistan's government -- at least initially -- claimed responsibility. But veteran Pakistani journalist Rahimullah Yusufzai says he -- and many other Pakistanis -- believe American planes carried out both strikes.

"The people in Bajaur will tell you that, look, this is the second time that the Americans have attacked us," he says. "And the Pakistan army has not been able to protect us."

This, then, is the delicate position in which Pakistan's leaders find themselves. They're caught between the U.S., an exceptionally powerful ally that says "you're either with us or against us" in the war on terror, and the Pakistani public, which views the U.S. with deep distrust. In the weeks since the latest Bajaur strike, the press in Pakistan has portrayed its leaders as wimps, caving to every American demand in the war on terror.

In an interview at his offices in Islamabad, Aziz also challenged the prevailing view of Pakistan as a breeding ground for terrorists. Aziz concedes this view was reinforced just a few months ago, in the wake of the foiled plot to blow up airplanes.

The plot involved British Muslims with Pakistani connections. But Aziz argues it is a British issue, not Pakistani one.

"Whatever events are taking place in Britain, and we have told this to the British government, it is an indigenous problem," he says. "And why are Pakistanis, why are they behaving this way in Britain? There must be a reason. We think the answer lies in Britain."

But clearly, at least part of the answer does lie in Pakistan. Just about all the big al-Qaida players killed or captured since Sept. 11 have been found in Pakistan. Officials argue this shows their commitment to counter-terrorism efforts. But you can argue it the other way, too, that al-Qaida leaders have been picked up in Pakistan because they're living and plotting there.

Then, factor in the near-daily incidents in Pakistan of rocket attacks, roadside bombs, market explosions. The violence is especially pronounced in the northwest of the country.

Peshawar is the capital of Pakistan's North West Frontier Province. And it is the home of Lt. General Alu Aurakzai, the man charged with trying to bring stability to the area. Aurakzai is the governor of northwestern Pakistan. Before that, he was commander of the Frontier Corps - the paramilitary force that guards Pakistan's tribal belt. Aurakzai points out some 700 Pakistani troops have been killed since Sept. 11 in the name of fighting terror. He shakes his head "no" when asked whether top al-Qaida leaders such as Osama bin Laden are in Pakistan today.

Which does lead one to wonder -- if they don't think he's in Pakistan, are Pakistani security forces still actively looking for him?

Aurakzai answers that question with a question. "What do you think our 80,000 troops are doing along the western border? They're not there on a picnic," he says. "You know how many operations we've carried out. You know how many casualties. So, obviously, we are very actively involved in this exercise."

In private, some Pakistani officials speak bitterly of how the U.S. treats their country. According to a White House press release dated Sept. 29th, the U.S. is providing high-tech equipment to help the Frontier Corps patrol the border with Afghanistan. It's also paying for more than 100 border outposts. But one senior Pakistani official, speaking on condition he not be named, said derisively, "What the U.S. gives us is peanuts. If they want us to do more, they should give us more."

U.S. intelligence chief John Negroponte says he's well aware that Pakistan's leaders have "a very tough row to hoe." But, in an interview with NPR, he still offered some gentle criticism. "I do think that one of the issues that still is not being dealt with as well as it might be -- it's the question of the sanctuary that some of the Taliban political and even military elements have been able to obtain in Pakistan. And I think that issue requires more work," he says.

Presented with this criticism, Pakistan's Home Secretary Sayed Kamal Shah all but rolled his eyes. "We feel that we have done more than what could have been possible by any other country," he says. "So when we hear this -- that Pakistan is not doing enough -- it hurts! And it hurts grievously."

Shah's boss, Pakistani President Pervez Musharraf, seconds this view. In a 2005 speech titled, "Global Terrorism," Musharraf said, "If Pakistan is not doing enough, the whole world is asleep. Because I think we are doing the most."