Accessibility links
Supreme Court to Weigh Schools' Racial Plans The Supreme Court re-enters the world of school desegregation on Monday. In cases from Louisville, Ky., and Seattle, the justices will examine what, if any, steps school boards may use to ensure that schools are racially mixed.

LISTEN TO THE ARGUMENTS 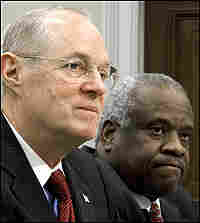 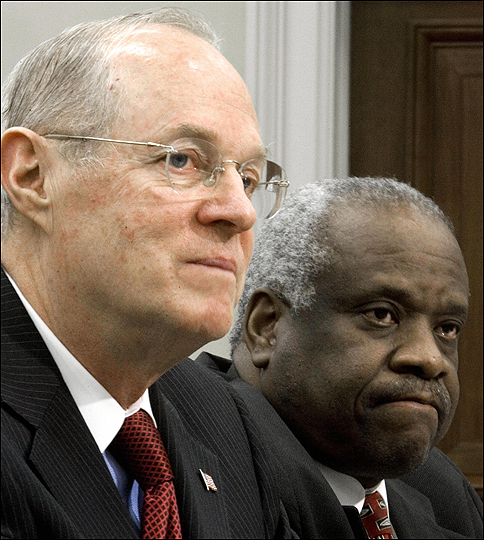 Supreme Court Justices Anthony Kennedy and Clarence Thomas -- shown here in April at a House Appropriations Subcommittee hearing on the high court's 2007 budget -- will join their colleagues in taking up desegregation issues Monday.

The Supreme Court re-enters the world of school desegregation on Monday. In cases from Louisville, Ky., and Seattle, the justices will examine what, if any, steps school boards may use to ensure that schools are racially mixed.

Louisville's schools, with 97,000 students, encompass both city and suburban areas, and have a racial composition of about two-thirds white and one-third black.

The school system, once segregated by law, remained segregated 20 years after the Supreme Court's landmark Brown v. Board of Education decision. In 1975 there finally was a legal reckoning when a federal judge ordered implementation of a desegregation plan just weeks before school was to begin.

Carole Haddad, a white parent, remembers the chaos of that time. "There were fires in the streets," she recalls. "We had to put monitors and police on buses because bricks were being thrown at students going into certain areas. Over at the school behind my home, they brought in the National Guard, and used it for a bomb squad."

Haddad was so infuriated by the plan that she decided to run for the school board. "I ran to oppose it," she says, adding with a smile that she now finds herself on the other side of the argument.

"I've come a long way and taken a big turn since then," Haddad says. Such a big turn that, still on the school board, she is a staunch advocate for continuing a race-conscious system of assigning children to schools, even though Louisville is no longer under any legal requirement to do so. "The parents really like it," she says simply.

Not so, says Crystal Meredith, a white mother who sued the Louisville School Board over her son's assignment. She has taken her case all the way to the Supreme Court, she says, because the school board assigned her son to a school "because of his race."

The school board's program is based on a combination of neighborhood school assignment, choice and racial balancing. In elementary school, each child is assigned to a neighborhood school. If a parent wants a child to go to another school, the parent can choose among as many as 10 schools in an assigned cluster scattered throughout the greater metropolitan area, and transportation is guaranteed.

Meredith's neighborhood school and first choice for her five-year-old son Josh was a year-round school. It had begun classes seven weeks before she registered for school and it was already full. Her second choice was close to her home, but not within her designated cluster. So she was assigned to another school, which was in her cluster, but farther from her house.

Meredith's application for a transfer was denied in a letter that stated: "The office of student services has disapproved your transfer request" because it would "have an adverse effect on desegregation compliance."

Under the county guidelines, with a few exceptions, each school must have no less than 15 percent and no more than 50 percent minority students.

More than 90 percent of all students get their first or second choice. But since Meredith did not appeal immediately, her son remained at the assigned school. When she finally did appeal two years later, the transfer was granted.

Her lawyer, Teddy Gordon, says that does not change the fact that the school board's race-conscious student assignment plan is unconstitutional. He claims it "is a pure quota," adding, "We've color coded children."

The school board hotly disputes that characterization. Pat Todd, Louisville's student assignment director, readily admits that "race is one of several criteria used." But only one, she says. Others include trying to keep siblings together, accommodating daycare pick up schedules, and other special circumstances.

Todd points to Meredith's successful appeal as a prime example of how the system accommodates special needs. The 15-to-50 percent minority enrollment guideline is so broad and has so many exceptions, she says, that it is hardly an inflexible quota. But Sharon Browne of the conservative Pacific Legal Foundation contends it is, arguing that "if you're the wrong color of skin, your transfer application is denied."

The quota question is more than semantics. The Supreme Court has said repeatedly that fixed numerical quotas are unconstitutional race discrimination. In the higher education context, however, the court three years ago affirmed that race can be one factor in deciding who gets into elite state institutions because the state has a compelling interest in fostering diversity in higher education. The question in this case is whether a similar rationale applies to primary and secondary schools where attendance is compulsory but no child is denied a place.

To supporters of the Louisville plan, diversity is more important in early grades than it is in college. Opponents counter that there are other race-neutral ways of achieving diversity -- such as assignment by socio-economic status. In school surveys, however, Louisville parents have rejected that approach as too intrusive, since it would require that families supply the school board with personal information.

What the parents want is important, the school board says. It points to the fact that white students were fleeing the Louisville public schools by the thousands until the board adopted a plan in the mid-1980s that combined race-conscious student assignment with choice. Suddenly, school attendance stabilized.

Indeed, racial concentration in Louisville's public schools has decreased, in contrast to a rise nationally. A survey conducted by the University of Kentucky found 77 percent of Louisville parents favoring the guidelines, even though it means that a majority of the children are bused, often from one end of the sprawling school district to the other. The reason for the guidelines' popularity, says PTA President Paula Wolf, is that there are so many different programs and approaches to educating children offered throughout the district.

To cite just one example, a parent can choose a strict traditional approach or an "open classroom" approach. Wolf explains with a laugh, "I have one child who would do well in traditional, another who'd probably have been removed.... He doesn't just think outside the box, he doesn't acknowledge there is one there."

PTA board member Mary Myers says the race-conscious assignment plan has also equalized school resources. "My children do not have to sit next to a white child to learn," she says, "but they need the resources of that school," and under this system, "they all get the same resources."

What's more, she says, diversity is more than a word: "I just like to see that 'cause I'm 48 years old, and came from a segregated school system."

Haddad, the school board member, echoes that sentiment. "Children see other children differently than they saw back in 1975..." she says. "They like all the kids. They don't differentiate between them, and I think that is really, really important as they grow up into the real world."

A fervent advocate of local control of the schools, Haddad resents the idea that the Supreme Court could tell her school system to abandon such a successful local program. She notes that public approval of the student assignment program is so high that school board members are routinely re-elected by high margins and that Gordon, the lawyer who is challenging the program, came in dead last in a field of four when he ran on a neighborhood school platform to represent a predominantly white area.

The Bush administration and its former solicitor general, Ted Olson, point out though, that before 1954, racially segregated schools were highly popular too. "To deny people opportunities on the basis of race because you've been re-elected by a high popular vote just won't cut it under the Constitution," Olson says.

The Constitution, he adds, requires that the government be colorblind. It cannot discriminate to offset societal discrimination. Frank Mellen, the school board's lawyer, says that's simplistic since the Louisville plan is an evolution of what the federal courts ordered until just six years ago.

"It would be odd," he says, "if what was legally required one day by a desegregation decree becomes forbidden another day when the court dissolves the decree."

A Dormant Program in Seattle

While the Louisville schools were once segregated by law, that was never the case in Seattle, the other school system before the Supreme Court on Monday. Of the 46,000 students attending the city schools, 41 percent are white, 24 percent Asian American, 24 percent African American, and 11 percent Latino.

Because of long-established segregated housing patterns though, the city's schools were for all practical purposes segregated too and the school board for decades used a variety of measures to integrate the schools. In 1999, the city embarked on the so-called "open choice" plan under which a student could choose any high school in the system.

But if a school became oversubscribed, there were certain "tiebreakers," including a preference for a student with a sibling already enrolled at the school, a preference for students who lived close to the school. An "integration tiebreaker" came into play when a school was more than 65 percent white or more than 75 percent minority.

Ironically, Seattle's race-conscious program was suspended in 2002. Since then, high school assignments have been made without using the integration tiebreaker, even though the plan was upheld by the 9th Circuit Court of Appeals. In a concurring decision in the case, the usually conservative Judge Alex Kozinski, a Reagan appointee, argued that public school assignments like these are not preferential treatment for one race over another because no race is turned away from government services and no student is stigmatized because of his or her race. Kozinski has a respected and influential conservative voice that some believe could resonate with the current Supreme Court

But other court observers note that the high court went out of its way to reach out for these two cases, each of which has procedural problems. The Seattle plan is no more, having been abolished. Its opponents contend that the case is still "alive" because the plan could be revived at any time. And in the Louisville case, the sole plaintiff in the case got her son transferred to the school of her choice.

The Supreme Court that will be hearing these cases today is quite different from the court that tackled the affirmative action issue in education three years ago.

Back then, Justice Sandra Day O'Connor cast the fifth and deciding vote, and she wrote the decision declaring that race is a permissible factor in making decisions on whom to admit to a college or graduate school. But O'Connor is now retired, replaced by the Justice Samuel Alito, widely believed to be hostile to affirmative action, as is the new Chief Justice John Roberts. Indeed, in a voting rights case last term, Roberts opined, "It is a sordid business, this divvying up by race."