Accessibility links
Children's Tunes Revive Spirit of Punk Rock Stefan Shepherd of the children's music blog Zooglobble says music for the smaller set is the new punk rock of the industry: Some of the best artists are cutting records "on their own time and their own dime." He shares some of his favorite new CDs. 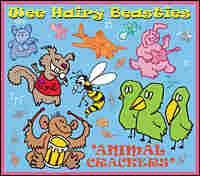 From the Jellydots' CD Hey You Kids!:

Scroll down to read about the CDs NPR host Melissa Block and her family have in heavy rotation in their house and car.

Stefan Shepherd, who writes the children's music blog Zooglobble, likens music for the smaller set today to punk rock of the 1970s.

Shepherd, the father of a 5-year-old daughter and 17-month-old son, cites the group Wee Hairy Beasties as an example. The group actually counts veteran punk rockers among its members.

The band members sound like they're having a lot of fun on their new release, Animal Crackers, says Shepherd.

"They're not talking down to kids, they're just playing these characters and having lots of fun doing it, and I think the recording really shows that," Shepherd says.

Other artists, such as the Jellydots, Johnny Bregar and Sam Hinton, also are producing music for kids that break the mold, whether it's with indie-rock riffs, full instrumentation, uncanny animal mimcry — or a sample from a Bee Gees' song.

I'm the mother of a 4-year-old girl, so I spend a good amount of time in the company of kids' music. And I've become pretty choosy. I don't have a lot of patience for music that panders to what I consider to be misguided notions of what adults think kids must like. Excessive goofiness? Out. Phony silly voices? Out.

But thankfully, there are a bunch of great musicians who have become parents themselves, and who realize it's up to them to make music the rest of us will enjoy. Then there are some classic CDs that still sound fresh to parents and children. Here's a sampling of what's on regular rotation in our house and car.