Glen Hansard and Marketa Irglova never set out to make a record: The two musicians had toured Europe together on and off, but that was mostly to provide a break from Hansard's long-running main band, The Frames. Then Hansard and Irglova were approached to record a pair of songs for a Czech film — and given four days in the studio, which they spent recording enough material for a full record, complete with the accompaniment of strings. 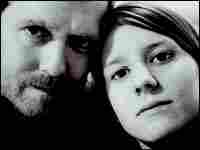 The result is 10 quietly brilliant songs, each built around piano, acoustic guitar, violin, cello and the two headliners' soft, sweet voices. Serious emotion bubbles beneath the melodies: The songs are optimistic in spots, but more often somber or desolate. Named for a work by one of Hansard's favorite Czech authors, The Swell Season is a lovely sleeper — and a must for Frames fans as they await the 2007 release of the Irish band's The Cost.