Accessibility links
Bolton Resigns as U.N. Ambassador, Avoiding Battle U.N. Ambassador John Bolton announces that he will step down at the end of his temporary appointment, which expires in a few weeks along with the current session of Congress. Bolton faced a tough, if not impossible, fight for Senate confirmation.

U.N. Ambassador John Bolton announces that he will step down at the end of his temporary appointment, which expires in a few weeks along with the current session of Congress. Bolton faced a tough, if not impossible, fight for Senate confirmation.

John Bolton, the U.S. ambassador to the United Nations, has handed in his resignation. In his letter to President Bush, Bolton said that he would leave his post when the current session of Congress ends, possibly within days. Bolton held the UN position on a temporary basis. The posting was due to expire in January.

JACKIE NORTHAM: John Bolton's short tenure as ambassador to the UN was contentious, controversial and thanks to his gift for pithy statements, colorful. Such as this comment about reforming the UN Human Rights Council:

Mr. JOHN BOLTON (UN Ambassador, United States): We want a butterfly. We don't intend to put lipstick on a caterpillar and call it a success.

NORTHAM: Bolton was first nominated for the UN post in March 2005. There was fiery debate during his first confirmation hearing. Many Democrats and some Republicans were concerned about Bolton's reputation for being pugnacious and intimidating.

President Bush sidestepped the Senate in August 2005 and appointed Bolton when Congress was in recess, angering many senators. The White House resubmitted Bolton's nomination last month, but with Democrats taking control of the next Congress, it was unlikely Bolton would be granted another term as ambassador.

Today, President Bush said he was disappointed about the resignation.

NORTHAM: Bolton did have some success at the UN. He pushed through sanctions against North Korea. But he also alienated fellow diplomats on issues such as Iran, Syria and Darfur. That could have had a negative impact on his key mission to overhaul the United Nations.

President Bush is expected to name a new candidate soon. Nicholas Burns, the undersecretary of state for political affairs, and Zalmey Khalizad, the U.S. ambassador to Iraq, are considered as possible replacements. 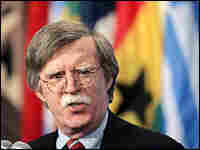 John Bolton, U.S. ambassador to the United Nations, speaks to the media on Oct. 13. Bolton said Monday that he will step down from his position within weeks. Stan Honda/AFP/Getty Images hide caption

If ever one man symbolized President Bush's willingness to wield power in a Republican-dominated Washington, it's John Bolton.

But now, Bolton has announced he won't stay in his job as U.S. ambassador to the United Nations once his temporary appointment expires in early January. So Bolton has come to symbolize something else: the new political reality facing President Bush.

When the president chose Bolton in 2005, he was making a statement no one could miss. Bolton was known for his strong advocacy of U.S. aims in the world, his harsh criticism of the U.N. itself and his determination to reform that institution.

Democrats in Congress knew Bolton as an outspoken partisan who had, among other things, organized some of the Republican resistance to recounting the Florida vote in the contested presidential election of 2000.

By choosing Bolton, Bush was throwing down the gauntlet both in the Senate and on the world stage. And when the Senate balked at confirmation, the president upped the ante by installing Bolton as a "recess" appointment in August 2005. Recess appointees serve until the next Congress is sworn in.

Bolton is a hawk, closely allied with Vice President Dick Cheney and outgoing Defense Secretary Donald Rumsfeld. Democrats long complained of Bolton's brash style and said he was miscast as the nation's top diplomat at the U.N. But Bush said he was the right man to force tough reforms at the international body.

The president could not get Bolton confirmed in the Senate. After the defection of Republican George Voinovich of Ohio, the Foreign Relations Committee could not muster the votes to report the nomination favorably. Bolton's name was sent to the floor without recommendation, at which point Democrats mounted a filibuster. Efforts to cut off debate came up short.

Rather than back off, President Bush sent Bolton to New York as this country's first unconfirmed ambassador to the United Nations. A year later, the president tried again to win confirmation for Bolton. Voinovich announced he had changed his mind, which seemed to indicate the nomination could reach the floor under more favorable circumstances and possibly win approval before the fall elections.

But it was not to be. Another Republican on the Foreign Relations Committee, Lincoln Chafee of Rhode Island, said he would not go along with the Bolton nomination. Chafee's decision was widely viewed as reflecting his tough re-election prospects, although Chafee stuck by it even after losing in November.

Chafee’s nay vote kept Bolton's nomination from being confirmed this fall or in the lame-duck session after the election. That meant the nomination could not be considered before the Senate majority changes hands in January. And in 2007, chances of confirmation will be nil. In January, Democrat Joe Biden of Delaware will become the new chair of Foreign Relations. A leading opponent of the Bolton nomination, Biden says there's no need to reconsider it.

The White House briefly contemplated possible loopholes to let Bolton stay on the job. But a second recess appointment could not carry a salary, so Bolton would be obliged to serve without being a paid official of the government. Another potential option was to send him back to the U.N. with a lesser job and title that did not require Senate confirmation.

But ultimately, the White House seemed to recognize that such gambits would draw more than just protests from Democrats, who are now ascending to committee chairmanships. The power equation has shifted.

So both employee and employer went through the necessary motions. Bolton wrote Bush a letter saying it's been an honor to serve and that the president's leadership "has been critical in safeguarding America's values and interests in a time of peril and challenge."

The president then released a statement praising Bolton. Bush said Bolton successfully won U.N. support for tough action against North Korea. He said he's "deeply disappointed" Bolton is not staying on. And the president lashed out at a "handful" of senators for engaging in "stubborn obstructionism."

But the real message from the president was that this was one political battle he knew he could not win.