Accessibility links
Dick Clark's Rock 'n' Roll Memorabilia Up for Auction Would you like Bruce Springsteen's guitar? How about John Lennon's Nehru suit? The extensive collection of rock 'n' roll memorabilia belongs to American Bandstand host Dick Clark, and is up for auction. 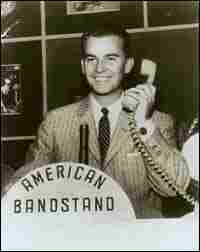 Dick Clark hosted American Bandstand for three decades. Among the megastars who made their network debut on the show: Madonna, Michael Jackson and Buddy Holly. hide caption 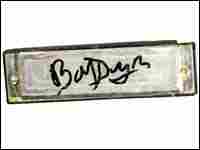 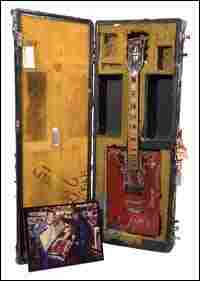 Also for sale is Bo Didley's handmade guitar, shown next to a photo of Didley handing the guitar to Clark. Guernsey's Auction House hide caption 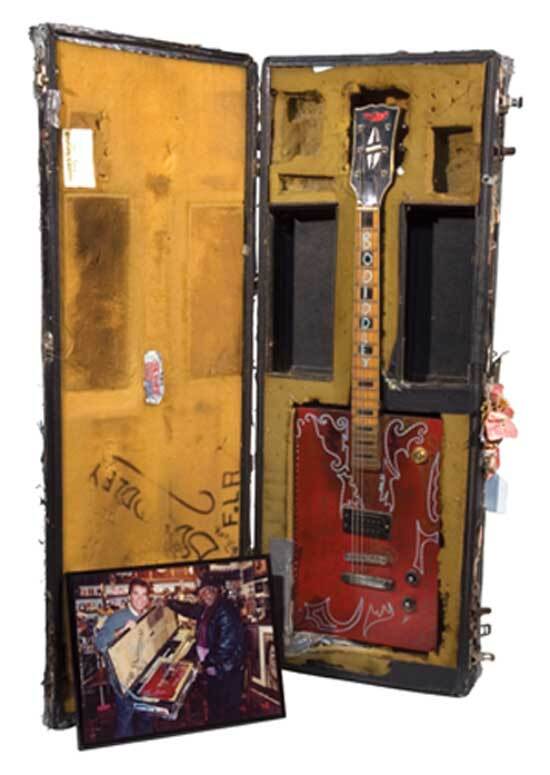 Also for sale is Bo Didley's handmade guitar, shown next to a photo of Didley handing the guitar to Clark.

Would you like Bruce Springsteen's guitar? How about John Lennon's Nehru suit? They belong to Dick Clark, who hosted the TV show American Bandstand for three decades. Once called America's oldest teenager, Clark is now 77 and recently suffered a stroke. His immense collection of rock 'n' roll memorabilia is up for auction Tuesday and Wednesday in New York City.

Over the weekend, many of the items were on display at the Time Warner building in Manhattan. Those who came to look were filled with nostalgia, among them, Marge Cotton Mayon of Nashville. She said all of the music represented by the collection had played a part in her life.

"Fats Domino and Chubby Checker and the Beatles and Elvis -- we loved them all," Mayon said. "We had that big hair with all the spray net, and we danced, and rock 'n' roll was fun. We watched Bandstand since I was a little kid. I was 5 years old when it started."

There are no minimum bids in this auction. Some of the proceeds will go to a foundation that raises money for research on cancer and AIDS.