Discovering Afghan Cuisine, a World Away

Discovering Afghan Cuisine, a World Away 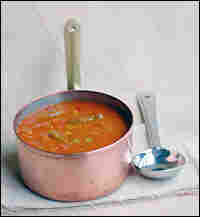 A stew of okra and yellow split pea typifies Afghan cuisine, which mixes influences from around the globe. Scroll down for recipes. Indira Singari hide caption 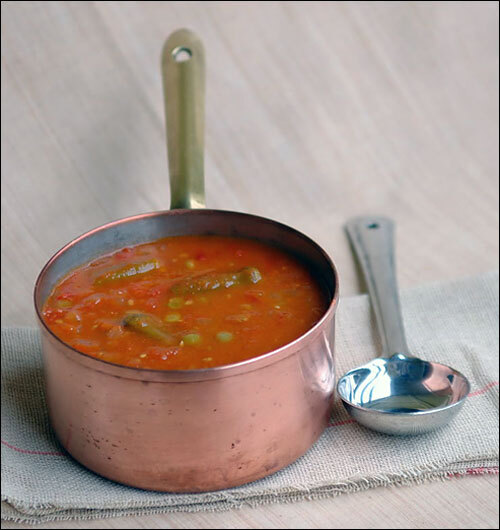 A stew of okra and yellow split pea typifies Afghan cuisine, which mixes influences from around the globe. Scroll down for recipes.

Vijaysree Venkatraman is a Boston-based freelance writer whose essays have appeared in The Christian Science Monitor and The Hindu, a national daily in India.

I grew up in India, but it was at restaurants in the United States that I came to know and love the food of my old neighbor, Afghanistan.

So I was dismayed when my friend Ashok had the opportunity, but not the inclination, to learn more about Afghan cuisine firsthand.

Ashok was newly stationed in Afghanistan, where he was working to help the country rebuild. He missed the food of India, but was not a fan of the local cuisine.

A South Indian architect, Ashok wrote with great feeling on his blog about life in the war-torn land, and posted pictures of a city struggling to get back to normal. But in the kitchen, he seemed entirely dependent on his cook.

"The Afghan nan (the local bread) is almost a meter-long and half-an-inch thick," Ashok wrote in a typical post on his blog. "Nobody makes it at home. Everybody buys it from local bakeries for 6 Afghanis a piece. It is alright when it is warm, but gives your gums a good exercise when cold."

I think Ashok is missing a lot. Afghanistan is at the culinary crossroads of many cultures. The cuisine relies on spices such as cumin, sesame, cinnamon and coriander, which are also central to Indian food. Green cardamom flavors Chinese green tea. The country's many kebabs show kinship with the Middle East, as does the liberal use of yogurt.

My fondness for things Afghan began when I was a child and read a short story by the Nobel Laureate Rabindranath Tagore. In it, the affable title character, Kabuliwallah -- "the man from Kabul" -- leaves home to earn his livelihood in Calcutta. There, he befriends Mini -- a little girl the same age as his daughter (and me at that time). The Kabuliwallah always brought Mini gifts of almonds, pistachios and raisins.

Nuts and dried fruits, too, are an integral part of Afghan cuisine. They are sprinkled generously on rice dishes and ground into rich chutneys. Long-grain rice is made into the various risotto-like pilaos that serve, like the breads, as a staple of the cuisine.

The slender tapering okra -- referred to as "the bride's fingers" in the local language, Dari -- is made into a delicious stew. Plump red pumpkins and squashes called kadhoos are pan-cooked with onions or transformed into halwa, a warm, melt-in-your-mouth dessert with the consistency of fudge. Rose water and saffron are used as flavoring in desserts. Bazaars are abundant with grapes, melons, pears and apricots in season.

Kabul has eateries and roadside stalls that sell kebabs and tasty snacks, but I suspect that the best local food, as in many places, is to be had in people's homes.

Despite their recent turmoil, Afghans have a legendary reputation for hospitality. And even during the country's time of incredible strife, its culinary traditions endure and comfort.

I can imagine being the guest of honor, sitting on the floor and dining in the traditional style with no cutlery, on a tablecloth-like dastrakhwan. My friend Ashok is missing all this.

"Perhaps, these days, for the best Afghan food you have to leave Afghanistan," he wrote to me.

I prefer to think that Ashok has a lousy cook. 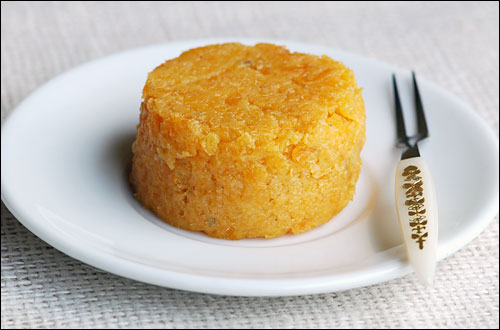 Made from butternut squash, halwa is a fudge-like dessert. This recipe is from Indira Singari, an Indian food blogger based in Seattle, who maintains the site Mahanandi.

Soak almonds in warm water to cover for about 1 hour. Remove the skins and rub almonds dry using a clean kitchen towel. Then grind them in a blender or food processor to a smooth consistency. This yields 3/4 cup of powdered almonds. (You can also use the same amount of store-bought marzipan.)

Peel the squash, remove the seeds and finely grate using a mandoline or box grater to yield 3 cups of tightly packed, grated squash.

Combine milk and sugar in a large, thick-bottomed vessel. Cook over medium heat for 20 to 45 minutes, stirring occasionally, until the consistency of store-bought condensed milk. (You also can use a cup of the store-bought stuff as a substitute for the milk-and-sugar mixture.)

Using a spice mill or a mortar and pestle, grind cardamoms into fine powder.

In a large, wide-bottomed saucepan, melt butter on medium-low heat.

Add the grated squash to the butter. With a slotted spoon, gently mix and cook until the raw smell of squash disappears and the vegetable's color changes from bright yellow to light orange, about 20 minutes. Stir constantly.

Add the milk-sugar mixture and almond powder. Add about 1 teaspoon of rose water and 1 teaspoon of cardamom powder. Gently mix and, constantly stirring, cook until ingredients form a firm solid mass, 10 to 15 minutes.

Place the mixture into a square pan with sides 1-inch high and press to distribute evenly. Place pan in the freezer for about 1 hour to firm up the mixture even more. Remove and cut into squares or use a cookie cutter to cut round, shape discs.

7-ounce can diced or stewed tomatoes (with no added salt)

Heat oil in a medium-size saucepan and saute the chopped onion until lightly browned. Add the okra and saute gently, stirring until they are well coated with the oil.

Add the split peas, tomatoes, salt and pepper and stir. Cook over medium heat, stirring occasionally, for a few minutes.

Add water to just cover the okra, and add the dill. Bring to a boil, then turn down the heat and simmer uncovered for 30 to 45 minutes, or until the liquid has reduced, the sauce has thickened and the oil has come to the surface.