Accessibility links
'This American Life' Is Ready for Its TV Close-Up How do you turn a hit radio show into something watchable? For more than 10 years, the WBEZ-produced This American Life has been a vehicle for many different types of contributors to share their stories. Now, host Ira Glass is taking his weird and wonderful show to the tube. The TV version debuts in March, on Showtime.

Listen
'This American Life' Is Ready for Its TV Close-Up 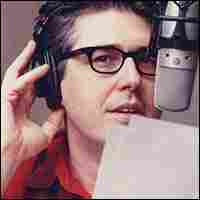 This American Life host Ira Glass started his career in public radio as an intern at NPR, in 1978. Richard Frank hide caption

No, scratch that. Humans in rat suits!

That's just one of the many odd discussions that took place in the process of transforming a radio program into a television series. The show is This American Life. The host is Ira Glass. The TV series will debut in March on the Showtime cable channel.

There's a certain simplicity to the art of radio. At its heart, it's all about storytelling. And This American Life is a radio show that revels in storytelling — quirky stories, sad stories, scary stories.

This American Life seems so wedded to the medium of radio that when the Showtime cable network first approached Glass about turning it into a TV show, he couldn't imagine it.

"We basically said 'no' for a year and half," Glass recalls. "And we kept saying we have no idea how to... be filmmakers. You have to hook us up with people who could design something that got across the feeling of the radio show."

They found those experts in cinematographer Adam Beckman and director Chris Wilcha. Sometimes Beckman and Wilcha have to tell people steeped in radio that their ideas just won't work on television. Other times, they take the ideas and turn them into compelling visual images.

Like the rats. This story, dealing with erasing memory in rats, caught the staff's attention when they heard that real people had called the researchers because they wanted their own bad memories erased. But Wilcha was struggling with the visuals. While Beckman and his crew worked, Wilcha pulled Glass aside to pitch his ideas, which included humans in rat suits.

It's not the first time Glass has been a bit taken aback by one of Wilcha's ideas. Take the desk, for example. They'd been trying to figure out Glass's role as host. Would he just be an off-camera voice? And if not, would he do stand-ups on location or would he appear on a set?

In the end, they decided to give him a desk. But not just any desk.

"What if your desk appeared out on the landscape?" Wilcha wondered. "On an abandoned freeway, on the Salt Flats, in the woods. But you never make mention of it or point to it."

So Glass, staring at the audience through his big, black-framed glasses, introduces the show and the stories from behind a sleek, art deco desk made of shiny, red wood. In one shot, the desk and Ira sit in the middle of Utah's Salt Flats, looking like an inconsequential speck in a vast moonscape.

Perhaps the most painful adjustment for Glass was having to perform for the camera. Not only did he have to say his lines over and over again — on camera, in a very public setting, surrounded by a huge crew — he also had to watch himself over and over again.

"I don't see any positive aspect of being on camera," Glass says. "I am 47 years old, I don't like looking at myself. After a certain point, no one likes looking at themselves on television. There's just no up side."

But for all the complications of television, producer Nancy Updike says there have been moments of unexpected pleasure. A longtime radio producer, Updike wasn't sure This American Life would translate to a visual medium. Then she saw the pilot.

In a story about efforts to bring a bull named Chance back from the dead, Updike was surprised that they had managed to transfer the feel of the radio show to television. And the images of the bull provided a pleasure that radio could not.

"They're almost glamour shots of the bull, different parts of him, and he's in shadow and it's breathtaking," Updike says. "It's a moment you can't have in a radio show, a moment of pure visual reverie."

And that's no bull.