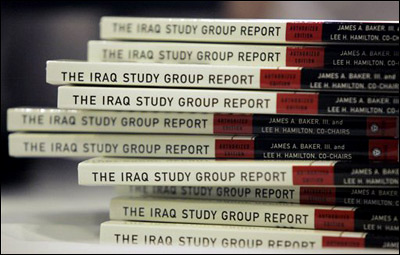 Reaction As Heard on NPR
Opinions from Around the World

Qubad Talabani, The U.S. Representative of the Patriotic Union of Kurdistan, and the Iraqi Kurdistan Regional Government and the son of Iraq president Jalal Talabani

Hear Special Coverage on 'Talk of the Nation'

To download audio of our special coverage, PC users right-click and select "save target as." Mac users control-click and "save (or download) link as." 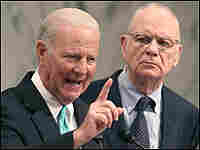 Reaction to the Recommendations

Find out what President Bush and leaders on Capitol Hill had to say about the commission's recommendations.

A long-awaited report by the Iraq Study Group paints a bleak picture of the situation in Iraq. The 10-member, bipartisan panel says the situation in Iraq is "grave and deteriorating" and could provoke a slide into chaos. The report, handed to President Bush and Congress Wednesday morning, lays out 79 recommendations to try to pull Iraq back from the brink.

The opening line sets a sober, grim tone: "There is no magic formula to solve the problems of Iraq."

It describes those problems as enormous: Violence in Iraq, fed by an insurgency, militias and crime, is increasing in scope and lethality. The Iraqi military and security forces are ineffective and corrupt. About 2,900 U.S. soldiers are dead so far, with another 21,000 wounded. There's no sign the situation will change anytime soon.

The panel's co-chairman, James Baker, the Republican who once served as a U.S. secretary of state, makes it clear the Bush administration's handling of the war is not working.

"We do not recommend a 'stay the course' solution," Baker said Wednesday. "In our opinion, that approach is no longer viable. "

In its report, the study group lays out three key recommendations.

First, the United States must help Iraqis take responsibility for their own destiny.

Former Rep. Lee Hamilton, the Democrat from Indiana who serves as the other co-chairman of the group, says that the Bush administration must send a strong message to Iraqi leaders to make substantial progress on national reconciliation, security and improving daily lives of Iraqis.

A second recommendation calls for a renewed, immediate push by the United States on the diplomatic front, including reviving Arab-Israeli peace talks and opening a dialogue with Iran and Syria.

The Bush administration has steadfastly refused to enter into talks with either country. Hamilton says both countries have enormous influence in the region and a lot of impact in Iraq.

"We will be criticized, I'm sure, for talking with our adversaries," Hamilton said. "But I do not see how you solve these problems without talking to them."

Hamilton and Baker are skeptical that Iran will come to the negotiating table. Baker holds out more hope for dealing with Syria's leaders.

And the study group also recommends that the United States make a fundamental change in its military operations by gradually shifting its troops from combat missions to training and advising the Iraqi army.

The commission suggests a five-fold increase in the number of U.S. troops embedded to train Iraqis. That would mean 20,000 U.S. trainers instead of the current 4,000. If all goes well, the report suggests, combat troops could begin leaving Iraq in early 2008.

Study group member Charles Robb -- the Democrat who served Virginia as a U.S. senator and governor -- says "embedding our forces at greater levels in the Iraqi military" will create "more capacity, more trust, more capability in the Iraqi forces."

The Pentagon, State Department and the National Security Council are due to release Iraq strategy reviews sometime in the next few weeks. President Bush has said he will look at all options before making any decision on Iraq.

Panel members on the Iraq Study Group said their plan didn't offer any guarantees, but that it would certainly improve the chances for success in Iraq.