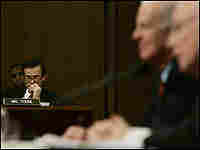 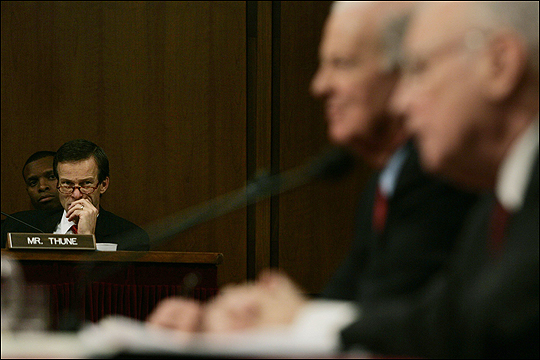 The two co-chairmen of the Iraq Study Group testified on Capitol Hill on Thursday about their recommendations for what they call a new way forward in Iraq.

James Baker and Lee Hamilton got a friendly audience with members of the Senate Armed Services Committee, but they heard pointed questions and skepticism on the part of some committee members.

Committee members were unanimous in their praise for the study group's efforts in drawing up 79 recommendations for a new approach to Iraq. But when the pleasantries ended, senators had tough questions about the substance of the panel's findings.

Sen. John McCain (R-AZ) was the harshest critic. He has been calling for more troops in Iraq, and he blasted the panel's finding that there aren't enough troops available to send.

McCain, a possible Republican presidential candidate in two years, questioned the panel's recommendation that the U.S. military shift its emphasis from fighting to training Iraqi troops.

There were also questions about another key recommendation: that the Bush administration expand its diplomatic efforts in the region and talk to Syria and Iran. Sen. Joseph Lieberman (D-CT) doubted the wisdom of that approach.

"I'm skeptical that it's realistic to think that Iran wants to help the United States succeed in Iraq," Lieberman said. "They are, after all, supporting Hezbollah, which gathers people in the square in Beirut to shout, 'Death to America.' They are giving sophisticated IEDs to the militias, which are killing Americans every day in Iraq."

"We're not naive enough to think that in this case they may want to help," Baker said. "In this case they probably don't. The president authorized me to approach the Iranian government. I did so and they, in effect, said we're not inclined to help you this time around. Fine. What do we lose by saying we're getting all of Iraq's neighbors together? If you don't want to come, we show the world what they're about."

Another probable presidential candidate on the committee, Sen. Hillary Rodham Clinton (D-NY) asked Baker and Hamilton how to get President Bush to go along with the report's findings.

"We've now heard from the Iraq Study Group, but we need the White House to become the Iraq Results Group," Clinton said.

Panel co-chairman Lee Hamilton, himself a former Democratic congressman, said he thought the current Congress bore some of the blame.

"I think it has not been a strong performance by the Congress," Hamilton said. "And what can you do to most assure success of the policy? I would say very vigorous, robust oversight."

That's just what the Democratic leaders of the new Congress are promising in January. But as Hamilton noted, it's the executive branch that must implement the report's recommendations.

Baker said that if Congress would come together behind the group's recommendations, it would -- as he put it -- "do a lot toward moving things downtown."