Accessibility links
Making Gas from Prairie Grasses Scientists at the University of Minnesota say you can make great biofuel from a mix of 16 kinds of prairie grass. And there's a bonus: prairie grasses suck carbon out of the air but don't return it when you burn it. 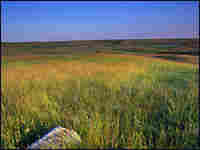 The idea of burning grass to fuel your car or heat your home might seem a bit odd. But call grass a "biofuel" and suddenly it sounds plausible.

Scientists are struggling to make biofuels cheap enough to compete with fossil fuels such as oil and coal. Growing anxiety over how fossil fuels warm the Earth's climate has quickened the pace of research.

Grass can be turned into a liquid fuel or burned in a power plant to make electricity. But it's an expensive process. Corn is the biofuel of choice instead. But ecologist David Tilman at the University of Minnesota says he's found a way to make prairie grasses more attractive than corn.

Tilman's team grew plots mixing 16 types of prairie grasses, including lupine, turkey foot, blazing star, and prairie clover. The plots with the most varieties produced the most biomass and produced more potential energy than corn and soybeans.

And the multigrass plots did something else. Like all plants, grasses capture and use carbon dioxide from the air. When a plant or a plant-fuel is burned, the CO2 goes back into the air. That's not good if you're worried about climate change.

But Tilman's prairie grasses bury much of that CO2 in the soil and in their deep, permanent roots. So a good deal of the CO2 stays in the ground after the harvest.

"We have discovered a way to make biofuels that by the time the whole life cycle is done and they are combusted, there is less carbon dioxide in the atmosphere than there had been before," Tilman says.

The cycle starts again after harvest, with new grass growing from the same roots.

Writing in the journal Science, Tilman calls this "carbon-negative" biofuel. It's just the opposite of biofuels from corn and soybeans, which are "carbon-positive." They produce more CO2 than they absorb because it takes more fossil fuel to make them. You need fossil fuel to run farm equipment, to make fertilizer, to make electricity to run fermentation tanks. Prairie grasses need much less help to grow.

"They're adapted to the region," says Tilman. "They grow with almost no input. We don't apply any pesticides. We don't need to use fertilizer. We don't irrigate them. They grow on nutrient poor soils and they are very efficient at converting the resources we do give them into energy."

But converting prairie grass into a useable fuel isn't easy. Robert Jackson, an ecologist at Duke University who's studied biofuels, says Tilman's findings are encouraging. But the marketplace still rules.

"Right now biomass is more expensive than traditional fossil fuels and many other renewables," says Jackson, "and the only way to change that is some sort of carbon tax or carbon-trading mechanism. When we pay for carbon, then we change the price structure for carbon."

The Department of Energy says it costs about five times more to make fuel from grasses than it does to make it from corn. But Jackson notes that prairie grasses do have advantages that could help them compete. Unlike corn, for example, they grow happily on poor, sandy soils. At some point, good places to grow corn will get scarce. That's when grasses may start to look a lot greener.