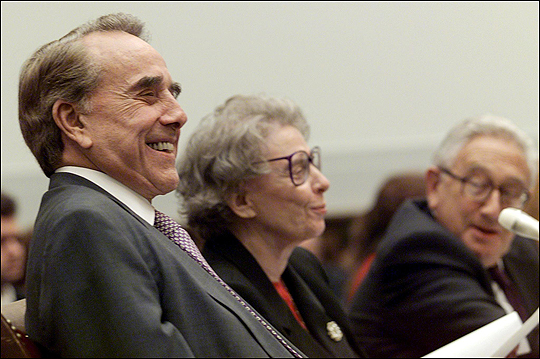 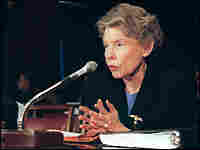 Jeane J. Kirkpatrick, a senior fellow at the American Enterprise Institute, testifies before Congress in 1997 about the pros and cons of NATO expansion. Joyce Naltchayan/AFP/Getty Images hide caption 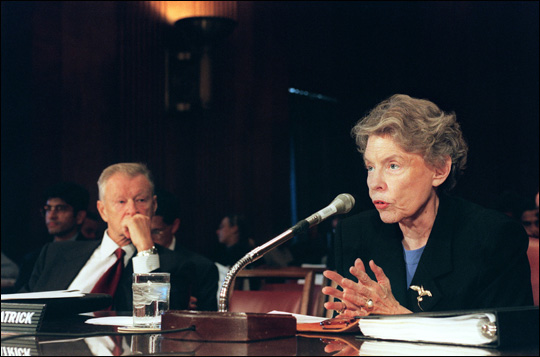 Jeane J. Kirkpatrick, a senior fellow at the American Enterprise Institute, testifies before Congress in 1997 about the pros and cons of NATO expansion. At left, former Carter administration official Zbigniew Brezinski looks on.

"Starry-Eyed:" Kirkpatrick on Madeleine Albright, a Rival for Secretary of State in 1996

Famine in Ethiopia the "One Time" U.S. and Soviet Union Worked Together

Jeane J. Kirkpatrick, a guiding voice of Reagan-era conservatism and the first woman to serve as U.S. ambassador to the United Nations, has died. She was 80.

President Reagan nominated Kirkpatrick to the U.N. post in 1981; she held the job until 1985. In the Cold War era, she was a proponent of U.S. support for pro-Western dictatorships, and she believed that pro-Soviet communist states posed a far greater threat to world stability. That philosophy came to be known as the "Kirkpatrick Doctrine."

A professor of political science at Georgetown University, Kirkpatrick became active in politics in the 1970s, advising Reagan on foreign policy in his 1980 campaign. She brought a different tone to the United Nations in her "confrontational predilections," her concern that the United Nations was a "dangerous place where conflicts tend to be exacerbated" and her staunch neo-conservatism, notes Seymour Maxwell Finger, professor of political science at the Graduate School and the College of Staten Island and director of the Ralph Bunche Institute on the United Nations.

Senate Majority Leader Bill Frist, the Tennessee Republican, praised Kirkpatrick for standing up "for the interests of America while at the U.N." and lending "a powerful moral voice" to Reagan's foreign policy.

Kirkpatrick herself was a staunch defender of Reagan. Interviewed on National Public Radio in 2004, she characterized her former boss as "a wonderful man to work for ... He never told me -- or, I don't think, anybody else who worked for him -- what to do or what to say." Most Americans "do not understand" his role in bringing about the collapse of the Soviet Union, she said, arguing that his increased defense spending forced the Soviets to counter.

"It was a fact that the Soviet Union was in bad shape economically," she explained. "A lot of our government didn't understand it very well, but Ronald Reagan understood it, and Bill Casey understood it ... that the very best way to compete with them was to put them under further economic pressure."

Although she left government service two decades ago, Kirkpatrick continued to play an active role in public issues, returning to her professorship at Georgetown and serving as senior fellow of the American Enterprise Institute.

As forthright as ever, she had no hesitations about giving advice to current politicians. In an interview with Tavis Smiley on NPR about the war in Liberia, she noted, "Presidents cannot and should not make decisions about where to deploy American troops in areas that are remote from us geographically, and also in terms of our interests."

In 2005, Kirkpatrick joined seven other former U.N. ambassadors in drafting a letter to Congress critical of a plan to withhold dues to force reform at the world body. The plan, the letter noted, would "create resentment, build animosity and actually strengthen opponents of reform."

Kirkpatrick's assistant, Andrea Harrington, said that the former ambassador died in her sleep at home in Bethesda, Md., late Thursday. The cause of death was not immediately known.

Kirkpatrick's health had been in decline recently, Harrington said, adding that she was "basically confined to her house," going to work about once a week "and then less and less."

Kirkpatrick's death was announced Friday at the senior staff meeting of the U.S. mission to the United Nations, said spokesman Richard Grenell, who said that Ambassador John Bolton asked for a moment of silence.

Compiled from NPR reports and the Associated Press.