Accessibility links
'Tsunami' Docudrama Set to Debut on HBO The disastrous tsunami that struck Indian Ocean coastlines in South Asia in December 2004 has inspired a new television mini-series. Tsunami is about to make its first of many appearances on the cable-channel HBO.

The disastrous tsunami that struck Indian Ocean coastlines in South Asia in December 2004 has inspired a new television mini-series. Tsunami is about to make its first of many appearances on the cable-channel HBO. 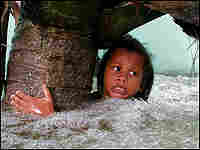 A scene from 'Tsunami: The Aftermath.' HBO hide caption

Nearly two years ago, 12 countries in Southeast Asia were devastated by a tsunami. More than 200,000 people were killed. Now Hollywood has produced a dramatic tsunami, a new HBO miniseries starting Sunday called "Tsunami: The Aftermath."

ANDREW WALLENSTEIN: There maybe no trickier proposition in Hollywood than mining fiction from a mass tragedy. To the credit of HBO, "Tsunami: The Aftermath" doesn't come across as exploitative. But I wouldn't call it transcendent either.

The miniseries explores the effects of the select group of individuals trying to make the best of a horrific situation. On the surface, it puts on a very strong showing. The tsunami and its wreckage are impressively recreated. And the emotional wreckage is well handled by a terrific cast including Oscar-nominees like Tim Roth, Toni Collette, and Sophie Okonedo. Perhaps the most powerful performance comes from Chiwetel Ejiofor whose character emerges from the waters, missing his wife and child. In this scene, he breaks bad news to a fellow survivor.

(Soundbite of movie "Tsunami: The Aftermath")

Mr. CHIWETEL EJIOFOR: (As Ian Carter) Your husband is dead. He died en route to the hospital, yesterday. I don't know where his body is. So, I had to leave him, just north of Kolac(ph). I'm sorry.

WALLENSTEIN: The main problem with "Aftermath" is it's deeply conventional and too often melodramatic. It's a miniseries in the most classic sense, forcing characters to intersect in artificial ways. They ranged from British tourist to the poor Thai natives who served them their drinks. Watching "Aftermath," you get the impression HBO couldn't decide which approach it wanted to take to the material.

So just tried all of them at once. There's the weepy drama, best exemplified here by the couple who begin to crumble after they lose their daughter. And there's the moral crusade detailing the fight between developers and villagers to claim ravaged lands. A story probably better left for a hard-hitting documentary.

But perhaps the most interesting aspect of "Aftermath" is the sub-plot that gets too little attention. It revolves around an ethical disagreement between two photographers on assignment together, one, a Brit played by Roth and one, Thai played by Will Yun Lee. When they happen upon monks burning unidentified bodies, it sets up an interesting clash between eastern and western philosophy.

(Soundbite of movie, "Tsunami: The Aftermath")

Mr. LEE: (As Chai) These people have families.

Mr. ROTH: (As Fraser) The monks have to take the living and those bodies are spreading fast.

Mr. LEE: (As Chai) Families like to gather together, say goodbye. Maybe even say your prayers. But be called a funeral.

Mr. LEE: (As Chai) We syndicate that shot.

Mr. LEE: (As Chai) It says we don't care. Look, you don't get it because you don't live your life like we do. To us, the body's just the vessel, what carries us through this life. And when it dies, the spirit's released into the next.

WALLENSTEIN: There's about five or six other storylines I haven't even gotten to yet. And watching "Aftermath" juggle it all becomes a distraction after a while. Watching something this raw demands a level of quality this miniseries doesn't quite muster.

BRAND: Andrew Wallenstein is an editor for The Hollywood Reporter and a regular contributor to DAY TO DAY.