Accessibility links
For First Time, More Poor Live in Suburbs Than Cities A move from the city to the suburbs used to signal prosperity. But last year, the number of poor suburbanites outnumbered poor people in cities by 1 million for the first time, a new report finds.

Full Report: 'Two Steps Back' by the Brookings Institution (PDF) 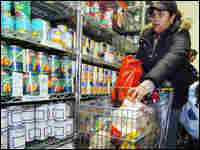 A woman browses the aisles of a community food bank. Poverty rates in both suburbs and cities rose between 1999 and 2005. Henny Ray Adams/Reuters/Corbis hide caption

A move from the city to the suburbs used to signal prosperity for American families. But last year, the number of poor suburbanites outnumbered poor people in cities by 1 million for the first time. That startling statistic is part of a new report that examines poverty trends in the first part of the decade.

On a snowy afternoon in Bedford Heights, Ohio, 67-year-old Shirley Coasten pushes her metal grocery cart across the parking lot at the Southhaven United Church of Christ. Coasten took a five-mile bus ride to get to the church's basement food pantry. She has to hustle to pick up today's offering.

Coasten used to work as a restaurant manager, in between stints as a department store clerk. Now, $700 a month in Social Security has to cover rent, electricity, medication and other bills. The pantry is a big help.

"Some of the items we get are items we usually don't buy," Coasten says. "And sometimes, we just get the same things over and over each month...that helps us so we can budget out our food money.

No Longer Havens from Big-City Woes

Six years ago, about 50 families used the Southhaven United food pantry regularly. Today, more than 700 do. They come from communities such as Warrensville Heights, Maple Heights and Walton Hills -- cities which used to be considered havens from big-city problems.

But researchers at the Brookings Institution in Washington, D.C., say this surprising shift in poverty demographics began long before the economic downturn of the early 2000s. That recession just kicked it into overdrive.

Alan Berube directs research for the Metropolitan Policy Program at Brookings. His team studied Census data from the country's 100 largest metropolitan areas, from 1999 to 2005. Six of the 10 cities with the biggest poverty-rate increases were in the Midwest. Toledo and Cleveland are two other Ohio cities in that category.

Berube says it's mostly just common sense that there are more poor people living in suburbs. Over the past three decades, as industrial and retail jobs vanished or moved outside urban centers, working poor families followed.

"It's really the Rust Belt and areas of the Southeast that relied heavily on industries like textiles, where there have been large job losses," Berube says. "[That's] a lot of people displaced from decent-paying jobs."

A Matter of Suburbs Close to Cities?

Other things were happening, too. For example, Berube says more immigrants settled in suburbs not only for work, but because housing was cheaper. More and more immigrant families are doubling and tripling up in suburban houses and apartments.

Some researchers say suburban poverty is fairly localized. Rebecca Blank is dean of the School of Social Policy at the University of Michigan Ann Arbor. She says low-income people in suburbs aren't necessarily living near the gleaming office towers and upscale subdivisions near the far reaches. Most just moved right outside the city.

"In some cases, these suburbs never had a lot of employment," Blank says.

She notes that many close-in suburbs were built in the post-World War II period when houses were smaller two-, three- or at most four-bedroom models.

"If you look at what's happening to housing size, and where people who are moving who are middle- and upper-income families, that's not the homes they want," she says.

But researcher Berube estimates that 60 percent of the suburban poor live beyond that inner ring of suburbs. They're the ones cleaning those gleaming office towers near freeways, he says. Wherever low-income workers migrate, Berube says, it's ultimately the "wrong side of the tracks."

"In a lot of metropolitan areas now," he says, "poverty, fiscal distress, poor-performing schools, little to no job growth is concentrating on one side of the region along with the poor, while a lot of the growth and opportunity goes to the other side of the region."

The Brookings report suggests that city planners and officials need to pay close attention to this booming trend. They'll need to give a lot more thought to issues such as affordable transportation, social services and affordable housing for low-income families.