Accessibility links
Capturing the 'Dark Side' of Ellis Island Stephen Wilkes photographed a side of Ellis Island that no one sees. Ellis Island: Ghosts of Freedom documents weather-beaten remnants of the immigration hub's abandoned buildings.

Listen
Capturing the 'Dark Side' of Ellis Island 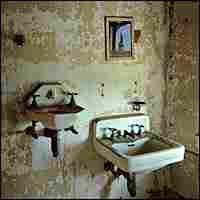 Tuberculosis Ward, Statue of Liberty, Island 3: Two sinks were provided for sanitary reasons, one for washing and one for spitting. The mirror reflects a view of the Statue of Liberty. Stephen Wilkes hide caption 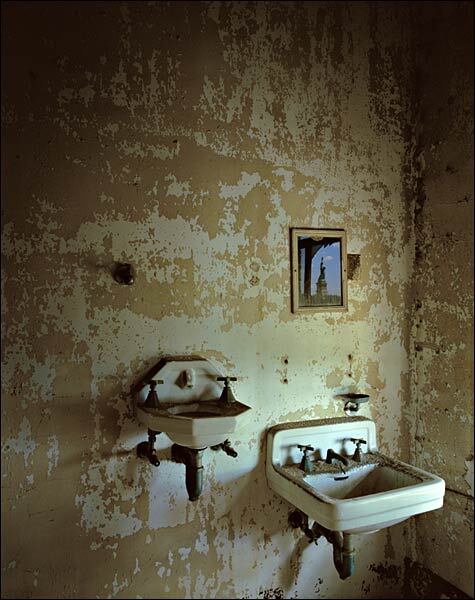 See More of the Book 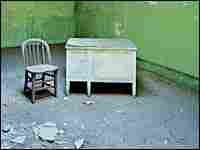 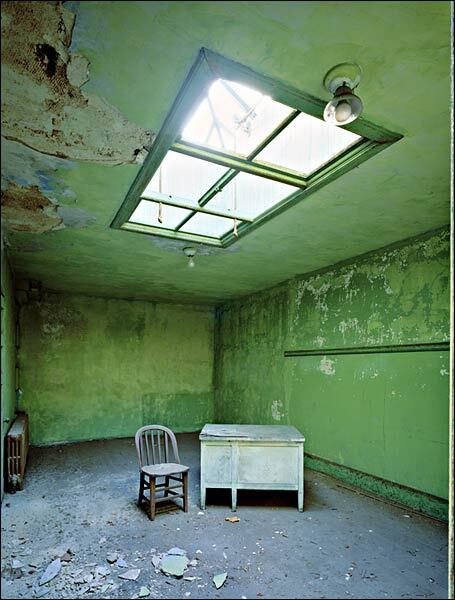 Psychiatric Hospital, Green Room, Island 2: "It was an overwhelming tension: the power of color merged with the human energy of history," writes Wilkes.

Sometimes, a journey of five years begins with a single hour. At least, that's what happened to Stephen Wilkes. One assignment -- to photograph the side of Ellis Island that no one sees -- turned into an obsession, and now a book.

Ellis Island: Ghosts of Freedom documents the weather-beaten remnants of the immigration hub's abandoned hospital buildings, where people who steamed past the Statue of Liberty on crowded ships were sometimes held back if they had an infectious disease or obvious disorder.

The hospital was shut down in 1954 and basically left untouched, except by salty harbour winds and time. When Wilkes began to take photographs there in 1998, trees limbs had started to reach into hallways.

Wilkes felt himself called back to the island, studying its unseen side for five years, through different seasons of the year. Like many people who visit Ellis Island, Wilkes had a personal connection to it: His grandmother escaped Austria in 1939, leaving through Naples, Italy, and arriving in America at nine years old.

The forgotten side of Ellis Island that Wilkes photographed no longer exists. An organization called Save Ellis Island has raised the money to "stabilize" the old hospital, which saves it from further decay, but also cleans up some of the rhapsodical ruin and rust that so touched Stephen Wilkes. Save Ellis Island hopes to open the hospital to tourists in 10 to 15 years. 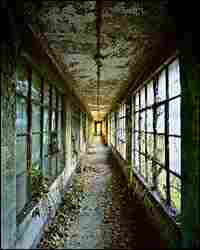 Corridor 9, Island 3: Wilkes says of this shot of Corridor 9: " One of the things that struck me was, obviously, there was this magic light that was coming into the room... I came back many times, and never got the light quite like that." Stephen Wilkes hide caption 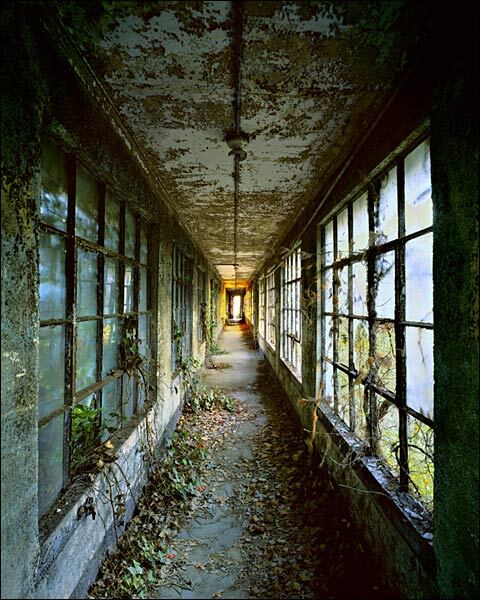 Corridor 9, Island 3: Wilkes says of this shot of Corridor 9: " One of the things that struck me was, obviously, there was this magic light that was coming into the room... I came back many times, and never got the light quite like that." 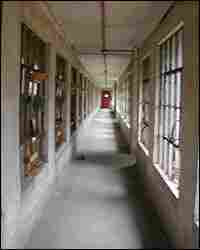 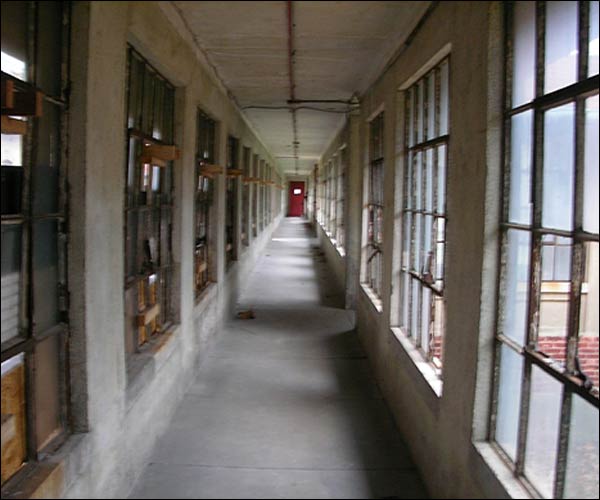 It is the dark side of the island.

A place where the huddled masses yearning to breathe free remained huddled, remained yearning, many permanently, just inches short of the Promised Land.

In the shadow of Ellis Island's Great Hall, forgotten by history and woefully ill-equipped in its battle with nature, I came upon the ruins of a vast hospital: the contagious-disease wards and isolation rooms for the people whose spirits carried them across oceans but whose bodies failed them, a stone's throw from Paradise.

The Statue of Liberty loomed over my shoulder, yet I felt no less an archaeologist than those who first ventured into the Mayan tombs. I wore a respirator against the ravages of asbestos and lead paint. I saw the shoes of immigrants long forgotten, shards of mirror, remnants of beds, the ruins of the autoclave, a chamber where tuberculosis-infected mattresses were sterilized with scorching heat. I saw ancient Eveready batteries hooked to strange pipes, what may be the first electro-shock therapy treatment ever conducted on these shores. I saw architecture that was fifty per cent the work of man, fifty per cent the triumph of nature. A surreal sculpture of vines, leaves and moss, mingled with shattered plaster, curling paint and rusted iron, meandered through empty corridors and dead rooms.

But mostly I saw life.

Not in an abstract sense -- or in the memory of the thousands who came to Ellis Island dreaming of life in America but who died instead here, across the harbor -- but in a tangible sense. I felt the palpable presence of humanity, everywhere I turned, in every room. It was an energy in whose presence I felt tremendous humility.

For two weeks after shooting the first group of pictures of Ellis, I was obsessed. I couldn't sleep, I couldn't erase the buildings from my mind. So I went back, many times every chance I could. What began, as a one-hour editorial assignment became a five-year passion. In a place few were ever allowed to enter, I was blessed to study through every season. I photographed every corner, every crevice, in every imaginable light. Strange things happened. I'd photograph a mirror that had hung on a wall for half a century, only to return to find its shattered remains. I'd photograph a shoe, which several days later had disappeared, though no one had entered the space after me. I photographed the 500-ft long spine of the hospital, Corridor 9, a long tunnel of decay. In the photograph, a golden glow of sunshine warming the walls at the far end is visible. In all the times I returned to it, I never again saw this glow, nor can I discern its origin.

Somehow, it felt as if I was chosen to do it: to document the light and the energy and living spirit of this place. I added no light of my own, nor any artifice of the photographic craft. I wasn't simply interested in graphics born from the patina of ruin. I wanted to record the place as I found it.

In the light lies the history of Ellis Island. In some as yet unknown calculus of time and energy, when the light came through the rooms, it energized the past. And that's how I found the island: the act of discovery and the act of photography occurred simultaneously.

The Island itself, rising in the water one mile from the tip of Lower Manhattan, was originally 3.3 acres in size. Landfill between the years 1892 and 1934 expanded Ellis Island to its current 27.5 acres. The original Island became known as Island 1, while the added land was known as islands 2 and 3. The added land as a whole is also called the South Island, and it is on this portion of Ellis Island that the photographs in this book were taken.

Working with the New York Landmarks Conservancy, I subsequently made a video. It was presented to Congress. Two years later, they approved a $6 million grant to preserve South Island as a living ruin.

It was a triumph not without irony. In stabilizing the buildings, many repairs have been made, and many of the encroachments of nature removed. The place will never again look as it does in these photographs. I was able to document a moment in time between the death of a place to which every one of us can trace a family member, and its final resurrection as a landmark. 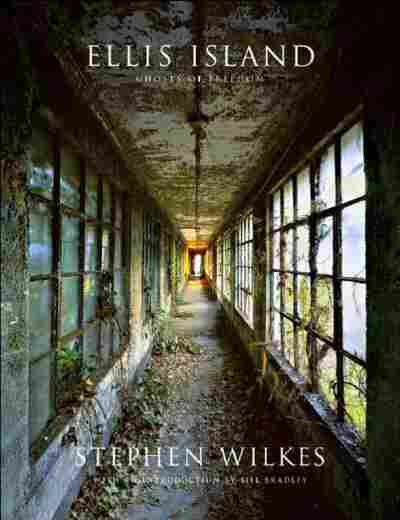 by Stephen Wilkes and Bill Bradley