Accessibility links
Shanghai Architecture Reflects City's Many Faces In a weeklong series, Louisa Lim looks at Shanghai's unprecedented building boom and how the city is preparing for its future, as a meta-city or a mega-metropolis. The city's population is now almost 18 million, and is forecast to rise to 25 million by 2020. 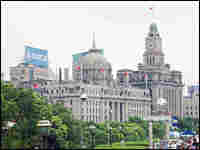 Shanghai's famous waterfront, the Bund, faces the Huangpu River. The neoclassical-style buildings are a legacy of Shanghai's colonial past, when this part of the city was the International Settlement. Vincent Ni hide caption 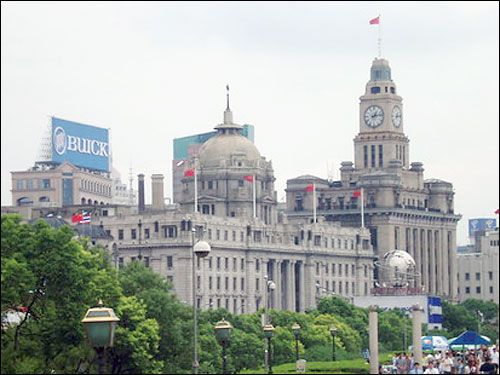 Shanghai's famous waterfront, the Bund, faces the Huangpu River. The neoclassical-style buildings are a legacy of Shanghai's colonial past, when this part of the city was the International Settlement. 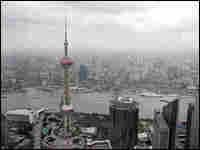 The soaring skyscrapers of Pudong, a district of Shanghai that sprung up in the 1990s, represent the architectural future of Shanghai. Louisa Lim, NPR hide caption 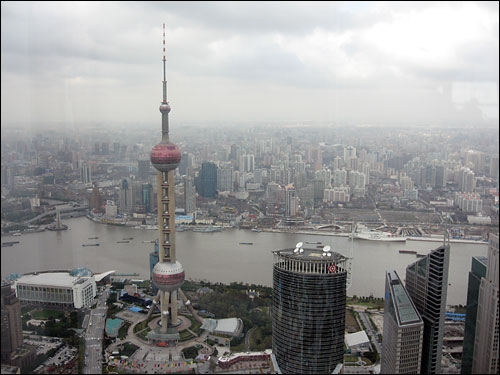 The soaring skyscrapers of Pudong, a district of Shanghai that sprung up in the 1990s, represent the architectural future of Shanghai.

A visit to Shanghai's urban-planning museum is enough to understand the city's towering, overarching ambition.

A scale model of the city takes up one entire story of the museum. Closer inspection shows whole swathes of the model are white or transparent in color, denoting structures that have not yet built.

This is the city planners' vision of Shanghai in 2020, and it's a sign of self-confidence that this museum celebrates a yet-to-be-accomplished future.

"The great gate — the principal entrance, in fact, to the Chinese empire" were the words used by the British botanist Robert Fortune to describe Shanghai. He'd arrived there in 1843, just days after the city was opened to foreign trade.

And Shanghai's historical role has not just been as the entrance to China, but also as China's window onto the rest of the world. Its geographic position facing outward to the world allowed it to become China's most cosmopolitan city, which adopted and adapted ideas from overseas well before its staid inland counterparts.

The city's architecture reflects this openness to outside influences — and illustrates its tumultuous history. The ornate Western mansions and cozy cottages are a legacy of its colonial past, when it was carved into zones under foreign influence in the 19th century.

A further architectural marriage of East and West developed in Shanghai: the city's shikumen houses, which were terraced buildings with carved stone decoration borrowed from Western tradition and communal Chinese-style courtyards.

In the Nationalist era of the early 20th century, another uniquely Chinese style emerged, with multistory buildings crowned with pagoda-like roofs.

Now, Shanghai's building boom is underway again, this time with a proliferation of towering skyscrapers bursting into existence, speaking of the city's importance as a global financial center.

In China, Shanghai's role is as a paragon of modernity, and also as a harbinger of the future. In May 1927, the Nationalist leader, Chiang Kai-shek, said "The rise or fall of Shanghai means the birth or death of the whole nation." China is now undergoing one of the most massive urbanization in human history, and Shanghai is a magnet for ambitious peasants, leaving their land to earn money.

Its growth also has created a huge market for farmers-turned-laborers, who have flocked to Shanghai to literally build the city of the future with their own hands. The city's population is now almost 18 million, and is forecast to rise to 25 million by 2020. This series looks at how this city is preparing for its future, as a meta-city or a mega-metropolis.

Transformation: While international attention has focused on China's economic and political rise as a nascent superpower, its physical transformation is often overlooked. An unprecedented frenzy of building means China's becoming a playground for the world's architectural superstars. It's an architectural "wild west," where complex planning decisions that take weeks or months in the United States are made in hours, or just minutes. In Shanghai, one example of this is the futuristic Pudong district, which has sprung up since 1990.

New Settlements: China plans to create 400 new cities by 2020 to cope with the extraordinary influx into its towns, a feat which requires the construction of 20 new cities a year. Shanghai itself is building nine new satellite cities from scratch in a project that was only launched five years ago. There's been much criticism of this scheme for failing to provide adequate employment and transportation links, but also for the architectural criteria requiring each city to be built in a different foreign style. This piece focuses on Thames Town, the faux-English city center to Song Jiang new town, which will eventually house seven universities.

Displacement: Local residents are the victims of the building boom transforming China's cities. One Swiss-based, nongovernmental organization, the Center on Housing Rights and Evictions, says the Chinese government has evicted nearly 3.7 million people in the past decade. Many of these forced evictions have taken place in Shanghai, the symbol of China's new economy. Official figures show that between 1991 and 2003, almost 1 million households were relocated in the city. Unofficial accounts speak of widespread coercion. This report focuses on displaced residents who had been living for decades in a historic building near Shanghai's famous waterfront, the Bund.

Nostalgia: Eighty percent of Shanghai's residents traditionally lived in lilong neighborhoods, rows of low-rise buildings set within a grid of alleyways. But as these are razed, residents say a unique way of life is also being destroyed. The lack of any private space required residents to share cooking and washing facilities, but led to very tight-knit communities, almost like enormous extended families. Filmmaker Shu Haolun grew up in one such community that is due to be demolished, and has shot a paean to lilong life.

Shanghai Through Authors' Eyes: Three different authors, whose novels are set in Shanghai, share their view of the changing city. Australian-Chinese novelist Brian Castro muses on the city where his playboy father waltzed in the 1930s, while native Shanghainese Qiu Xiaolong reflects Shanghai's mutations in his detective thrillers. Finally, the chronicler of underground drug and club culture, former heroin addict Mian Mian, anatomizes a city she describes as a "young bitch who loves money."

One observer, Mary Ninde Gamewell, wrote of Shanghai, "Changes are going on continually all over the city. Day by day old buildings are disappearing and modern ones rising in their place. It is to be feared that many of the ancient landmarks will soon be gone."

It's a statement which rings true today, but actually it was written in 1916. This, in itself, shows Shanghai's true face, as a city that thrives on perpetual change and transformation.