Accessibility links
Bill Kelso: Digging Up the Truth About Jamestown This year marks the 400th anniversary of the first permanent English settlement in America at Jamestown. And that makes Bill Kelso — the man who excavated the site — one very happy archaeologist.

Listen
Bill Kelso: Digging Up the Truth About Jamestown 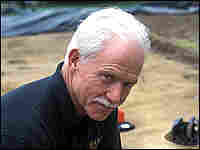 Dr. Bill Kelso first came to James Island decades ago as an aspiring archaeologist. At the time, the fort was believed to have eroded into the James River. Since breaking ground in 1994, Kelso has uncovered the fort , numerous skeletons and thousands of artifacts. Courtesy of the APVA hide caption 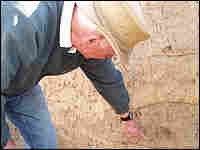 Kelso points to the "colonial layer" of sediment that might produce more artifacts from the 1607 fort. The layers above were dumped during the Civil War for the construction of a Confederate earthen fort. Thomas Pierce, NPR hide caption

The Jamestown fort has been found.

Four hundred years ago, 104 English settlers landed on the marshy shores of James Island in Virginia. Within 19 days, they'd erected a triangular fort — part of the first permanent settlement in America.

It was Spring 1607 when the English arrived. But five months later, more than half of the men were dead — most from famine. And many historians assumed that the James River had long since washed away the original site of the timber fort. At least that's what park rangers told aspiring archaeologist Bill Kelso when he first visited the island four decades ago. Kelso didn't believe them. And now, on the eve of the settlement's 400th anniversary, he's not only located the old fort, he's in the process of rebuilding it. When anniversary celebrations begin in May, he'll be one happy archaeologist.

Kelso began his quest in 1994, after the Association for the Preservation of Virginia Antiquities announced plans to investigate the island before the 400th anniversary. He started alone — just a man and his shovel. Almost immediately, he began turning up fragments of early 17th century ceramics.

Before long, he uncovered soil with dark stains left by long-since decayed logs. These logs had been a part of the fort's south palisade. Kelso's intuition had been correct. Over the next two years, he located the rest of the wall. In the end, only one corner had been submerged in the James River.

Following the blueprint of the stains, Kelso's crew has since reconstructed segments of the fort walls. More recently, they began rebuilding a storehouse with the mud and rough-cut timber that the colonists would have used.

The effort has convinced him that history has painted the wrong picture of Jamestown.

"The traditional story is that these were just a bunch of gentlemen who weren't used to working hard," Kelso explains, "that they were out in the wilderness, didn't know what to do, and all sat around and waited to die of hunger or something."

But Kelso and his crew have found evidence of intense activity.

Re-creating what life was like for the Englishmen is important to Kelso. That's partly why he agreed to become a set adviser for The New World — Terrence Malick's cinematic vision of the John Smith and Pocahontas story.

"If you want to know what it was like to be in Jamestown in the early 17th century, see this movie," he says. "The Indians didn't want them here most of the time. There was nobody protecting you, covering your back. Even the people you're with could be a problem."

In fact, one of the first skeletons he uncovered was a gunshot victim. More than likely, he was killed by a fellow settler's musket. The fall of 1607 was a stressful time for the colony; civil unrest was probable. Famine, disease, exertion and Indian arrows took a heavy toll. In one section of the fort, Kelso's team has found some 30 overlapping grave sites; they're now marked with crosses.

Whose Bones Are They?

Kelso is drawn to one particular grave, just beyond the fort walls. Two years ago, Kelso happened upon the remnants of a coffin filled with more than bones. Inside was a ceremonial captain's staff — an indication of importance. Based on the skeleton's age and date of burial, Kelso thinks he's found a man named Bartholomew Gosnold.

Gosnold was one of the fort's designers (although he doesn't have the name recognition of John Smith).

"Smith himself said he was the most important person in the whole colonial effort of Jamestown. And yet, who's ever heard of him?" Kelso asks.

The skeleton is now on display on James Island in a museum that Kelso has named the Archaearium – a term that means "place of old things." DNA tests haven't yet confirmed Kelso's belief that the bones belong to Gosnold. But Kelso's convinced — and he's a man whose earlier hunch about Jamestown turned out to be absolutely correct. 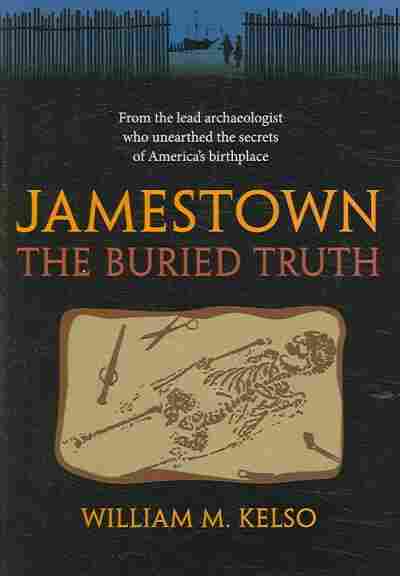