Accessibility links
Jennifer O'Connor: Raw Rock, Honest Folk : World Cafe Whether O'Connor is a folk singer with a rock aesthetic or a rocker with folk leanings is ultimately a moot point. The New York City resident crafts music that's honest, accessible and even fun, and on her new album, she seems destined for a breakthrough. 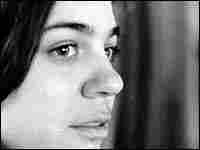 Singer/songwriter Jennifer O'Connor takes the raw power of rock and merges it with the plaintive honesty of folk to make honest, unpretentious, affecting music.

O'Connor began her musical career in a punk band called Violet after graduating college in Atlanta. She struck out on her own in 2000 and moved to New York City, where she attracted notice for 2005's The Color and the Light. Its recent successor, Over the Mountain, Across the Valley, and Back to the Stars, sounds like fodder for a massive breakthrough. While a full band accompanies O'Connor on all but one track, the new songs are pared down to their bare, immediate essentials.

Album
Over the Mountain, Across the Valley and Back to the Stars
Artist
Jennifer O'Connor