Accessibility links
Somebody Spying on You? Must Be the Shoes Nike offers new shoes that are designed to work in conjunction with iPods. But University of Washington researchers have found that radio frequencies from the shoes make them vulnerable to tracking and surveillance.

Listen
Somebody Spying on You? Must Be the Shoes

Nike offers new shoes that are designed to work in conjunction with iPods. But University of Washington researchers have found that radio frequencies from the shoes make them vulnerable to tracking and surveillance.

All right. And there's more than music on your iPod if you have something called the Nike+iPod sport kit. This thing goes in your shoe and connects to your iPod. And there there's a little voice that comes over your music, and it tells you how far you've run and calories and such.

Sounds neat, but report Jeff Rice says a team of graduate students at the University of Washington has found out the sport kit raises privacy concerns.

JEFF RICE: The Nike+iPod sport kit features a small, built-in pedometer that sends radio signals to an iPod Nano. As you run, a motivational voice gives you updates on things like your pace, distance and calories burned.

RICE: One of the people who bought the shoe iPod combo was Scott Saponas, a graduate student in computer science at the University of Washington.

Mr. SCOTT SAPONAS (Graduate Student, University of WA): And I started using it to track my runs. It even helped me motivate to run more.

RICE: It's just the kind of gadget that appeals to Scott, who's a student of what is known as ubiquitous computing.

Mr. SAPONAS: The idea is looking at interfaces for computers for the next generation of computing applications. It occurred to me that it's possible that applications like this could potentially be leaking information I don't want it to leak.

RICE: So he fears that devices like the speedometer, which sold almost a half a million units in its first few months, are a privacy concern. Consider Scott's shoes. Right now, the little, seemingly innocuous shoe pedometer is sending out all kinds of information - not just that he's running at a seven-minute pace or how many calories he's burning.

Mr. SAPONAS: I've burned 49 calories in the course of this interview, according to my Nike+iPod Sport Kit.

RICE: As part of a class project, Scott and two other graduate students have shown that the shoes sends out a potential tracking signal.

Mr. SAPONAS: So what happens is with the sensor in my shoe, when I start walking around, it starts broadcasting a unique identifier. So we can…

RICE: Saponas and the other members of the study team, Carl Hartung and Jonathan Lester, are looking at a Google Earth image on a large screen.

Mr. SAPONAS: No, we need to plug it in to the speakers.

RICE: Every time Saponas runs around the room or simply taps his foot, his location shows up on the map. A code sent by the pedometer in the shoe travels anywhere from 10 to 60 feet. A hacker with a basic knowledge of soldering could place a small receiver at strategic locations, let's say next to a running path, or…

RICE: The signal can then be plugged into a computer and tracked.

(Soundbite of music being cut off)

RICE: Some critics say those scenarios are far-fetched. Apple refused to comment for this story, while Nike issued this written statement.

Unidentified Man: (Reading) Nike takes consumer privacy very seriously. The Nike+iPod Sport Kit features the same level of security as millions of other wireless consumer electronics devices such as mobile phones, Bluetooth devices and cordless phones. Should the consumer have any concerns, the sensor can easily be turned off or removed.

RICE: But privacy advocates say those millions of consumer electronic devices that Nike mentions may just be the big issue in all of this. University of Washington Professor Yoshi Kohno, who co-authored a paper with the students about the potential security problems, says this is about a broader issue.

Professor YOSHI KOHNO (Computer Science, University of Washington): So I think one of the purposes of our study was just to understand the trends in modern technology. And what we found was that modern technology is still coming out that don't fully address the broad spectrum of privacy issues.

RICE: Lee Tien, a lawyer with the nonprofit advocacy group The Electronic Frontier Foundation, calls this kind of thing a form of privacy pollution. A single product is one thing, but millions of everyday devices are another.

Mr. LEE TIEN (Lawyer, The Electronic Frontier Foundation): The real question that we have to face is do we want this kind of technology and the attitude that comes with it to be the way things are over the next 10, 15, 20 years? Because if everyone thinks that way, then we're probably guaranteed that the social environment will be very dense with tracking devices that have no security and will also be dense with readers. Let's look at the big picture. It's a marathon, not a sprint.

Go the Distance with a Well-Fitted or High-Tech Shoe

Go the Distance with a Well-Fitted or High-Tech Shoe 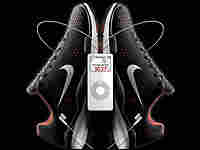 If you are a runner who wants to push yourself harder, there's a new high-tech running aid on the market that's built in to your shoe.

It's a small device that signals to your iPod, which interrupts your favorite iTune, and your run, to tell you how you are doing.

The Nike and iPod sports kit consists of a pair of running shoes with a built-in pocket under the insole (about $100 for shoes and $29 for the sensor kit). A sensor that you insert inside the pocket measures your running pace and wirelessly transmits the data to your iPod nano (pricing for the nano starts at $149.)

When you start your run, you select your music and a pleasant voice -- you choose the gender -- tells you to hop to it. At the press of a button, the voice will return to tell you how many miles you have run and how fast you are running.

For Portland, Ore., runner and businessman David Howitt, it's like running with your own personal trainer.

"I feel like I have a coach with me, telling me I'm on pace or off pace," Howitt says. "It definitely pushes you."

The voice will even tell you if you are running particularly well. After one run, Howitt says Lance Armstrong's voice came on and congratulated him for running his fastest yet.

After you cool down, you can download all your running data into your computer and compare it with other runs. It will even tell you how many calories you are burning.

But if you look for this kit at The Portland Running Company, you won't find it, says owner Dave Harken.

At this Portland Institution, the emphasis is on how the shoe fits, not whether a sensor can fit inside. Harken watches as his new employee Jake Gartland runs in his old shoes. Gartland's big toe is a giant cue, says Harken.

"Jake is pronating," Harken says. "As he runs, his foot goes beyond the big toe. It rolls too far over and creates knee and hip misalignment."

Gartland's problem, like most other runners, is his body is not perfectly aligned, causing problems for his knees and his hips, says Harken. He suggests that Gartland buy a shoe with a little extra support under the arch of the foot.

"To make it firmer on one side, to slow him down and keep him off the big toe," Harken explains.

Gartland tries on the new shoes, and goes for a little jog. This time, Harken sees a better alignment with Gartlanhis knees and hips line up, meaning less stress on his joints and fewer injuries.

Harken says every runner, especially beginners, should have their run analyzed. The key to a comfortable and injury-free run, he says, is a well-fitted pair of shoes.