Accessibility links
Evictions Reflect Dark Side of Shanghai Growth As Shanghai undergoes a radical facelift, tens of thousands of residents are forcibly displaced from their homes each year. Many say real-estate developers are conspiring with officials to seize property for little or no compensation. 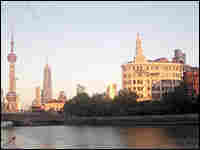 The residents of this curved, white art-deco building (right) claim they've been evicted without fair compensation. Their building, built in 1928 as the Capitol Theatre, is an example of Shanghai's heritage architecture. Scroll down to read more about the building's history. Vivian He hide caption 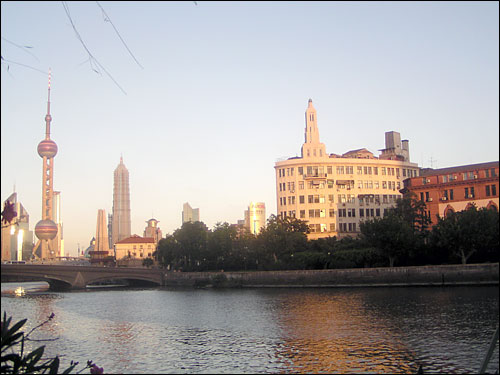 The residents of this curved, white art-deco building (right) claim they've been evicted without fair compensation. Their building, built in 1928 as the Capitol Theatre, is an example of Shanghai's heritage architecture. Scroll down to read more about the building's history.

In China, Shanghai's role is as a paragon of modernity, and also as a harbinger of the future. China is now undergoing one of the most massive urbanizations in human history, and nowhere is that more evident than in Shanghai. The city's population is now almost 18 million, and is forecast to rise to 25 million by 2020. Louisa Lim has an overview of the city's past — and how it's preparing for its future.

As Shanghai undergoes a radical facelift, tens of thousands of residents are forcibly evicted from their apartments each year. Many have accused unscrupulous real-estate developers of conspiring with corrupt government officials to seize their property for little or no compensation.

The residents of a historic building on the Bund, Shanghai's famous waterfront, are one such group.

People who have lived in the beautifully curved, sinuous Art Deco building dating from 1928 say they're being unfairly thrown out as part of an urban-renewal scheme. The residents won't give their real names for fear of the consequences.

Some of the residents say that as former officials, they were given their flats at very low rent — they thought in perpetuity — as recognition for their contribution to the state.

They now say they've been evicted by the developer, a company set up by a Mitsubishi subsidiary called Rockefeller Group International and a government-affiliated real-estate company, the New Huangpu group. The developer is planning to use their building as part of a high-end retail and office project called Bund Origin.

"We welcome foreigners who've come to help China get rich. It's fine if you want to refurbish our neighborhood. But if you need our home, you have to resettle us properly first. It's not right to force us out," she says.

These residents turned down initial compensation offers, which they say were worth one-sixth of the apartments' market value. They then lost a court case over their legal rights to the property. They were ordered out.

While more than 80 percent of their neighbors struck compensation deals with the developer, these few say they haven't agreed upon or received any money. When some were evicted, they even chose to leave behind their possessions, like Mr. He.

"I didn't take anything except the clothes I'm wearing. If I took my things, it would be like letting Rockefeller steal my apartment. One day, I will return because truth and justice are on my side," he says.

He reminisces about growing up in the building: watching holiday fireworks over the Huangpu River from the roof; running downstairs for Peking opera performances in the theater there; and his whole family sleeping in the corridor during the sweltering summers.

All the neighbors feel a painful sense of dislocation.

"Every day, I see my apartment and I want to cry," says Mrs. Gu. "I lived there for decades. I feel so sad, my heart hurts."

Tang Zhiping, a senior city planner, dismisses the claims. He says the relocation process is beneficial to Shanghai residents, but that they always want more money.

"If you ask them if they're satisfied with their compensation, not one person would claim to be happy," he says.

But the New Huangpu group is now embroiled in a huge political scandal, which has resulted in the downfall of its two top officials. The controversy revolves around the illegal investment of the city's pension fund in real-estate projects. It has led to the dismissal of Shanghai's communist party secretary, Chen Liangyu.

Ultimately, these holdouts have few options but to give in, as their neighbors have. In the glitzy new Shanghai, the struggle of these residents represents the price paid for progress.

Just look around this city, one of the residents said, wherever you see redevelopment, you'll know ordinary people's rights have been trampled. 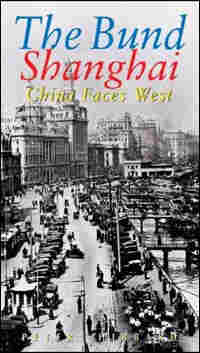 The thoroughly modern Art Deco Capitol Building, also known after its owner as the Shahmoon Building, was the first edifice in the city to accommodate offices and apartments over a theatre. Its magnificently decorated 1,000 seat theatre, devoid of any obstructive columns, had a roof of huge, steel reinforced concrete beams supporting the floors above. Building regulations had to be totally rewritten to allow such a precedent and the theatre was also the first to be air-conditioned in the city.

(A)... fateful fire of March 1924 played no small part in the advent of this unusual and imposing structure. Its modernist, sail-shaped, ground plan was determined rather by the Shanghai Municipal Council's need to have a wide road curvature at that point, than by the architect's design proclivities. And in return for their great prize, the SMC approved Mr. Solomon Elia Shahmoon's radical proposals for the new building in 1925, five months before the new building regulations were to take effect, 'at the express request of the owner... to enable him to erect the type of building he desires.' Unlike its predecessors, the new building was constructed of fire-resistant reinforced concrete.

A North China Daily News columnist commented that the 'building is an expression of all modern tendencies. It may be noted that the classical architectural style borrowed from a bygone period has been abandoned for the sake of adopting a style which corresponds entirely with present-day constructional methods in regard to building materials used and also in regard to the purpose of the building.' Mr. C. H. Gonda, its Czech architect, who later installed his offices in the building, used coloured concrete and glass in its wine and amber-toned interior and employed Russian artists to produce murals and sculptures featuring thespian themes. Although such features are nowhere in evidence today, much decorative relief has survived in parts of the theatre and on its unusual concrete stairways. The theatre's original balconies, with their fine wrought iron work, have also withstood the test of time. Its highly decorated octagonal foyer, however, has long since disappeared. The building's decorative embellishments were undertaken by Mr. Podgoursky, a renowned locally-based artist, who had recently completed murals for the Palace Hotel and the French Club and who was to undertake a commission for the Cathay Hotel in the following year.

The Capitol, on the corner of Huqiu Road and South Suzhou Road, which opened on February 25, 1928, also employed a fine orchestra under the direction of Mr. Bakaleinikoff, another Russian. The major Hollywood studios, among them United Artists, Columbia Films, Twentieth Century Fox and Paramount Films, made their headquarters in the building. Although the theatre featured a film vault on its roof, a large group of armed Italian marines stormed the theatre in January, 1929 and forcibly took the first reel of the film The Street Angel from the projection room during an evening performance. Mussolini had personally taken offence at the movie and the marines set fire to the celluloid outside the entrance of the theatre. Shanghai's Censorship Board responded by cutting a few clips from the film in deference to Italian susceptibilities, including one scene where Naples was described as 'sordid' and another showing monkeys assaulting the Neapolitan police. Later, in its guise as the Culture News Theatre, Japanese propagandist newsreels and documentaries were screened to a less than indifferent audience between 1943 and 1945. As part of the present scheme, the theatre will be reopened and the rest of the building, with its prime roof space, is scheduled to be reinvented as a fashionable boutique hotel. 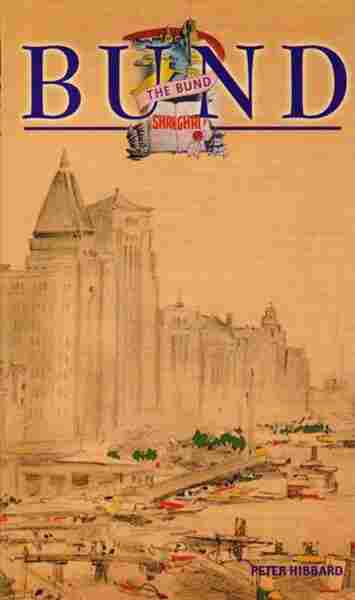