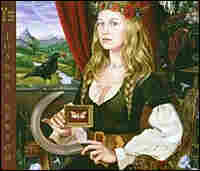 Joanna Newsom is a singer, songwriter and harpist. Her second album is Ys. hide caption

Joanna Newsom is a concert harpist, an unusual background for a singer-songwriter.

Her debut album, The Milk-Eyed Mender, was widely praised in 2004.

She won over many fans with her harp playing, but that's not the only challenge for first-time listeners to Newsom's enchanting tales.

The 24-year-old singer is part of a growing musical movement referred to as "freak folk"-- a term many of the artists involved don't seem to care very much for.

Listen to All Songs Considered count down listener picks for the year's best CDs (90 mins).

NPR Music's online show All Songs Considered holds its annual countdown of the year's best CDs, as selected by NPR listeners. Host Bob Boilen chats with reviewers and listeners about their picks and plays highlights from each album.

Below are the results of an online poll with the top ten CDs of 2006, chosen by listeners, with select comments from some of the fans who love them. You can also read the top ten lists for critics Will Hermes, Meredith Ochs and John Richards.