Accessibility links
Ballroom Dancers Waltz to Healthier Hearts Italian researchers have found that just 21 minutes of dancing, three times a week can match the cardiovascular benefits from working out on a treadmill or bicycle. The news is good for those who hate to work out -- but love to dance. 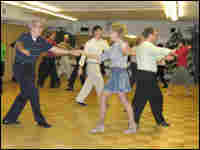 For those who love it, ballroom dancing beats a dull workout on the treadmill. And now, cardiologists are also realizing just how powerful the dance workouts can be.

Italian researchers have found that just 21 minutes of dancing, three times a week, can match the cardiovascular benefits from working out on a treadmill or bicycle.

Thompson says the movement -- which helps the arms, legs and torso -- is also an instant stress reliever.

"You cannot maintain a clench when your shoulders are pressed down," he says. "Your arms are extended so it's a very freeing [and] open feeling. It makes you breath a little deeper and it gets the blood flowing."

The study finding is music to the ears of 61-year-old ballroom fanatic Bob Silva.

"I don't like to exercise," he says. "I hate it. But if I'm dancing, I don't care how tired I am. When I hear the music and see the women, I can just push myself and it feels wonderful."

After two years of dancing at the Dance Factory in Arlington, Va., Silva realized that his hobby was also improving his health. He lost weight that he wasn't able to lose before, and was able to cut his blood pressure medications in half.

"I didn't have any physical endurance," she says. "I could barely make it though one song. And if I couldn't, I'd apologize to my partner and sit down and wait until I could get up again."

Lund says the dance studio has almost become her second home. It's that much fun, she says.

"I can't believe I fell into this just by accident," says Lund. "It's changed my life. That's a big statement. I was heading towards a lot of weight-related health problems, and I've turned that around."

Not everyone who tries ballroom dancing falls in love with it. But those who do find that exercise becomes a form of play.