Dr. John Marler of the National Institutes of Health talks with Madeleine Brand about Arteriovenous Malformation, the condition that reported caused the bleeding in Sen. Tim Johnson's brain.

So what is arteriovenous malformation? AVM, as it's known, is an abnormal connection between the arteries and veins. It can occur anywhere in the body, but when it happens in the brain, it can have widespread and serious effects.

Remember Nate from the TV show "Six Feet Under"? That's what he had.

Mr. PETER KRAUSE (Actor): (As Nate) If I'd never been in a car, I shouldn't have gotten a routine x-ray on my skull, this would have never even come up, right?

Unidentified Man: (As Doctor) Until something happened.

BRAND: Here to tell us more about AVM is Dr. John Marler of the National Institutes of Health. Welcome to the program.

BRAND: I understand that AVM is created before birth in utero or shortly after and Senator Tim Johnson just suffered symptoms. He's 59 years old. So that suggests that someone with this condition can live a long time without symptoms, so -

BRAND: Your whole life. How common is it?

Dr. MARLER: It's not that common. It probably affects at most a few percentages of people. It's really hard to determine because people can live their whole lives with an AVM and never make it into anybody's medical record.

BRAND: Do doctors know what causes the blood vessels to develop abnormally in utero?

Dr. MARLER: No, we don't. AVMs when we discover them are all shapes and sizes. They often are discovered incidentally as in Nate doing an x-ray or a brain scan for another reason. Sometimes they present with a seizure and occasionally with bleeding. When they present with bleeding, it's usually - I won't say minor - but it's not the serious kind of bleeding that is often fatal that occurs with the bleeding that comes from high blood pressure, another cause of the bleeding.

BRAND: And it appears in Senator Johnson's case that he did present with symptoms. He had slurred speech. And NPR has information that the location of the AVM is in the part of his brain that influences speech and movement, so if that turns out to be true, is that a more serious form of AVM?

Dr. MARLER: It's hard to tell at this time a specific case from the information. Usually, the bleeding from an AVM goes into the cavities of the brain and doesn't destroy the tissue of the brain. It's that that we're concerned about, is how well the brain survives this bleeding. Later, decisions can be made about whether to totally remove the AVM or to just let it take its natural course.

BRAND: And would the patient have to then undergo some sort of rehab?

Dr. MARLER: It depends on the deficit that's left if there's any disability at all. I mean, at this point, it wouldn't be unusual to have a very good recovery so that rehab wouldn't even be required. It depends entirely on the individual case.

As I say usually the hemorrhage from AVM is not as serious as other brain hemorrhages that might lead people to have a lot of concern.

BRAND: Dr. John Marler of the National Institutes of Health. Thank you very much.

BRAND: And for more information about Senator Johnson's illness, go to our Web site, NPR.org. 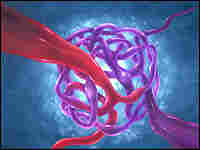 An illustration depicting an arteriovenous malformation, or AVM, an abnormal collection of blood vessels. Normally, red oxygenated blood is pumped by the heart through arteries to the tissues, and blue, deoxygenated blood then passes back to the heart through the veins. In an AVM, the artery connects to a vein, preventing blood from reaching the tissue but also putting pressure on veins. Mediscan/Corbis hide caption

Sen. Tim Johnson (D-SD) is recovering after surgery Thursday night to correct circulation problems in his brain, according to Adm. John Eisold, the U.S. Capitol physician.

Johnson's health has repercussions for control of the U.S. Senate, where Democrats are expected to take control in January with only a one-vote majority. If Johnson has to leave his Senate seat, South Dakota's Republican governor would appoint his replacement, likely a Republican, which would tip the Senate in the Republican Party's favor.

Doctors at George Washington University Hospital in Washington, D.C., where the surgery was performed, say Johnson suffered from a condition called arteriovenous malformation. Here, a look at the condition, how it's treated, and what recovery expectations are:

What is arteriovenous malformation (AVM)?

An AVM is a cluster of abnormally formed blood vessels. In medical images, it looks like a tangle of arteries and veins. About 300,000 people in the U.S. have these malformations, but most AVMs never cause any symptoms. The malformations can occur in various places around the body, however, those in the brain or spinal cord can cause the most widespread damage, because they affect the central nervous system.

AVMs disrupt the normal system used to provide oxygen to the brain. Ordinarily, arteries deliver oxygenated blood to the brain and veins return it to the heart and lungs. But in an AVM, blood that should be in an artery can flow through a vein. When that happens, part of the brain may not get enough oxygen. Also, veins are not meant to handle the high pressures and fast blood flow of arteries. So they may expand or even rupture, causing bleeding in the brain.

There are several different approaches. The idea is to get rid of the tangle. Surgeons can open up the brain and actually cut out the problem area. Another approach is radio-surgery, which uses gamma rays to eliminate the tangle. Or doctors can thread a small tube through the arteries and inject a glue-like substance that closes off the blood vessels.

The problem is that it may not be possible to eliminate the tangle of veins and arteries without disrupting blood flow to an important area of the brain. So not all AVMs can be safely eliminated.

What kind of recovery can be expected?

AVM is serious. A patient is most likely to do well if doctors can eliminate the malformation before it has caused brain damage. In this case, a patient can recover very quickly.

But if the AVM has already caused brain damage, recovery is similar to a stroke. It can take months or years. And the recovery may never be complete.

Also, all the procedures used to eliminate an AVM carry risks of their own. The surgery itself can cause brain damage or cause a stroke.