Accessibility links
Dream World to Cosmopolis: Authors' Shanghai Shanghai is changing at breakneck speed. That transformation, along with the hope, fear, greed and nostalgia that it engenders, is the stuff of novels. Three authors talk about the inspiration that China's most exciting city provides them. 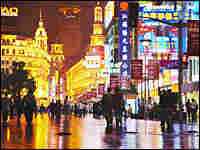 Authors of different genres of literature are drawing on Shanghai's excitement, colorful history and vast transformation for their works. Rolf Bruderer/Corbis hide caption 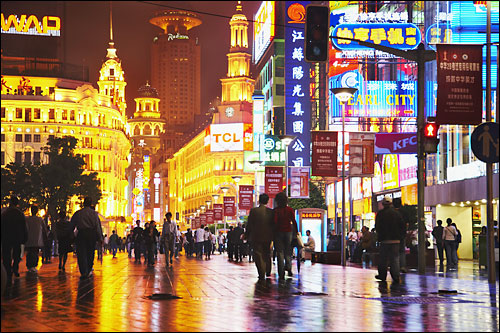 Authors of different genres of literature are drawing on Shanghai's excitement, colorful history and vast transformation for their works.

In China, Shanghai's role is as a paragon of modernity, and also as a harbinger of the future. China is now undergoing one of the most massive urbanizations in human history, and nowhere is that more evident than in Shanghai. The city's population is now almost 18 million, and is forecast to rise to 25 million by 2020. Louisa Lim has an overview of the city's past — and how it's preparing for its future.

Shanghai, China's most exciting city, is changing at breakneck speed. That transformation, along with the hope, fear, greed and nostalgia that it engenders, is the stuff of novels.

Brian Castro is one author who draws inspiration from Shanghai. It's where his playboy father lived in the 1930s. The award-winning Australian writer's fictional autobiography, Shanghai Dancing, tells of his quest into his family's past.

"It was a mythical place for me, and it was a kind of dream world for him," says Castro, who was born in Hong Kong in 1953 to Eurasian parents.

Castro describes lavish parties on river piers where his great-great-grandfather showered money on rickshaw drivers who brought the guests.

"Can you imagine how obscene that is? But that was the kind of magical scenario I was brought up with," he says.

Castro's attempt to rediscover his father's world first brought him to Shanghai in 1994. But he says the scale of the transformation means is such that Shanghai feels like a completely different city, and he laments the lost worlds that will never reappear again.

That Shanghai is constantly changing also has led Castro to contemplate "transience, and how memory and forgetting works, and how cities sink and rise." For now, he sees Shanghai as ascending.

"It's like a star rising. It will take Hong Kong over in its pure industry and energy, yet at the same time, there's a lot of loss of the past," he says.

This sense of loss also looms large in the works of another, very different author. Born in Shanghai in 1953, Qiu Xiaolong now lives in St. Louis and writes detective thrillers set in his native city.

Qiu uses the city as a mirror to reflect the changes sweeping China, and how ordinary people, like his poetry-loving detective, Chief Inspector Chen, are caught in that transition.

Chen tries to change with the city, but can't help missing the old ways, author Qiu says. "He doesn't have a clear-cut answer whether this [change] is good or bad."

However, Qiu believes that the city's essence lies in its ability to embrace the new: "Shanghai in China is always … changing with new trends. I don't think that kind of essence is changing."

Mian Mian, whose work speaks to a younger generation of Chinese readers, acknowledges the debt she owes to growing up in Shanghai.

"Shanghai is the most open city in China," she says. "We're more brave … I'm very lucky to be Shanghainese if I want to be a modern writer."

The 36-year-old author's first novel, Candy, became an underground best-seller after Beijing banned it in 2000. The author is a reformed heroin addict, and her books venture into the seamier side of China's reform era, with a cast of characters including drug addicts, gangsters, slackers and artists.

Ten years ago, she described Shanghai as a "beautiful young bitch who loves money." She still characterizes the city as a "super-superficial" young female.

For Mian Mian, the mood of the city has changed in the past decade. In the 1990s, Shanghai was like a small town, where everyone knew everyone and people were positive about the future.

Now, she says, the country is changing too fast. "Everyone is pushing and running because of business."

Shanghai, too, is rushing headlong into the future, even as its inhabitants struggle to deal with the present. It's racing to become a showcase settlement, a paragon of modernity. And yet in building a new tomorrow, it risks forgetting, or even erasing, its own past.

Brian Castro, Qiu Xiaolong and Mian Mian write about Shanghai, the "Pearl of the Orient," from very different perspectives, focusing on different periods in the city's storied history. Excerpts, and readings from the authors, are below.