Accessibility links
Wal-Mart Heir's Bid for Art Riles Philadelphians A bid by Wal-Mart heiress Alice Walton to purchase the 1875 Thomas Eakins painting "The Gross Clinic" is causing an outcry in Philadelphia, where many consider it part of the city's cultural landscape. Walton, ranked by Forbes as the world's ninth-richest person, is building a museum of American art in Bentonville, Ark.

A bid by Wal-Mart heiress Alice Walton to purchase the 1875 Thomas Eakins painting "The Gross Clinic" is causing an outcry in Philadelphia, where many consider it part of the city's cultural landscape.

Walton, ranked by Forbes as the world's ninth-richest person, is building a museum of American art in Bentonville, Ark. -- but her acquisitions have rankled some. 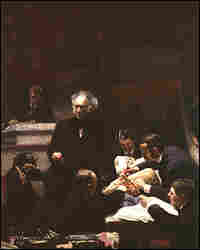 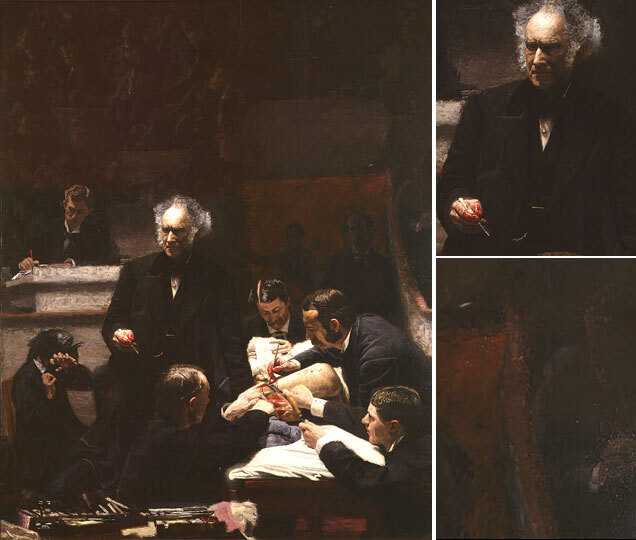 Dr. Samuel Gross (seen in the upper-right inset), a world-famous Philadelphia surgeon, is a hero in "The Gross Clinic." The artist, Thomas Eakins, who had studied under Gross, can be seen in the right-hand side of the canvas (lower-right inset), sitting in near-darkness. "I think it's a way to kind of give authenticity to the painting -- to say, 'I was a witness to this. I was there,'" says Kathleen Foster, curator of American art at the Philadelphia Museum. 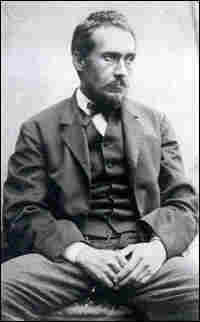 Thomas Eakins, seen in an undated photo, painted "The Gross Clinic" in response to a call for entries in the 1876 Centennial Celebration in Philadelphia. He described the painting as "far better than anything I have ever done." Pennsylvania Academy of the Fine Arts hide caption

Two Philadelphia museums are scrambling to raise $68 million, enough money to keep a local art treasure from slipping away. If they fail to reach their goal by a Dec. 26 deadline, "The Gross Clinic," Thomas Eakins' 1875 masterpiece, will be sold to museums in Washington, D.C., and Arkansas.

The painting depicts doctors performing surgery on a boy's leg -- an unusual subject for art at the time. Dr. Samuel Gross, a world-famous Philadelphia surgeon, stands, lecturing to students, scalpel in his bloody, gloveless, right hand. There's more blood on his assistants and, of course, the patient.

Kathleen Foster, curator of American art at the Philadelphia Museum, notes that Rembrandt and other artists of the era did clinic paintings. But the Eakins work was "so in-your-face; it was really [a] surprising, astonishing painting," she says.

And it still packs a punch more than 130 years later. "I think that there's something wrong with you, or maybe you're a surgeon, in order to not feel a certain queasiness looking at this picture," Foster says.

But much has changed since "The Gross Clinic" was created. For one thing, all the doctors are wearing business suits, which was normal at the time.

"Doctors didn't really have a sense that they needed to be in a sterile environment," NPR Science Correspondent Joe Palca says. Infections after surgery were common -- and puzzling. "People didn't actually realize that the doctors were bringing the infections and the germs in with them from the street," Palca says.

The painting also shows the method of anesthesiology at the time -- a cloth with chloroform or ether held over the patient's face.

"The Gross Clinic" is a dark painting -- all those business suits -- but Eakins shows Dr. Gross standing in a shaft of light.

Operations in those days "always took place at lunch time because the sun was overhead and so the light was the best in the middle of the day for surgery," Foster says.

Often called the greatest 19th century American artist, Eakins made it a point to watch surgeries and even perform dissections at Jefferson Medical College in Philadelphia (where the painting currently hangs). He was a fanatic about the need for artists to understand anatomy. And he makes a cameo appearance in "The Gross Clinic," sitting in the near darkness on the right side of the painting.

"I think it's a way to kind of give authenticity to the painting -- to say, 'I was a witness to this. I was there,'" Foster says.

No one knows the name of the patient in "The Gross Clinic," or what happened to him. But Palca says the surgery was likely a success.

"Dr. Gross had gotten this technique down where he only scraped away the dead bone," Palca says. "Apparently in the past, they would amputate the leg. And so this was a less invasive procedure. He was good at it, and there's a good chance that this patient would have survived."

When "The Gross Clinic" was originally shown in New York, a critic called it "one of the most powerful, horrible yet fascinating pictures that has been painted anywhere in this century."

In 1878, three years after Eakins made the painting, some of Gross' former students bought it for Jefferson Medical College. They paid $200. Soon it will be sold -- for $68 million.

The Philadelphia Museum of Art and the Pennsylvania Academy of the Fine Arts are hoping to raise that amount by Dec. 26. Otherwise, the painting will go to the National Gallery of Art in Washington, D.C., and the Crystal Bridges Museum of American Art, under construction in Bentonville, Ark.